Originally published in June 2001 in The Globe and Mail 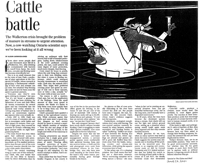 The Walkerton crisis brought the problem of manure in streams to urgent attention. Now, a cow-watching Ontario scientist says we’ve been looking at it all wrong

Ever since seven people died and thousands more fell ill in Walkerton, Ont., after drinking water contaminated with bacteria from runoff from farms, the study of cows, cow pies and flowing water has become scientifically hot.

This is in no small measure due to the voice of Ann Clark, a professor of plant agriculture at the University of Guelph, whose research is proposing a fundamental rethinking of how cows and streams can co-exist. Her solution? Stop fencing the cattle out and let them cross the water to greener pastures.

“Everyone says they’ve seen cows shitting in streams,” she says, “but it’s too broad a generalization.” Clark has been studying the behaviour of cows and their effect on stream ecosystems for several years and has concluded that the classical (and costly) solution involving long lines of barbed wire is mostly an unnecessary expense that ignores what cows actually do.

From 1997 to 1999, Clark was part of a team of scientists who set out to investigate cattle habits and their impact on streams. Over a period of eight years, they covered six counties in Ontario collecting data from pasture walks on eight beef-producing farms.

The team found that even when cows had unfenced access to streams, they returned with astonishing regularity to the same crossing points, as if to marked territory. Fewer than five per cent of the cows deposited manure directly into the water while under observation.

“That’s the central surprising thing to come out of this research,” says Clark, who now insists that cows are less likely to threaten water by direct defecation than by stirring up sediment with their hooves that is full of harmful pathogens. Laying down reinforcement at the cows’ preferred crossing points, she says, could achieve the same degree of water protection, much more cheaply, than fencing.

Cows stand for hours in ponds, where the only thing they contaminate is their own drinking water. But when it comes to flowing waterways, which could transport bacteria downstream to municipal wells, Clark says, the animals don’t dally. They target their preferred crossing point and spend an average of only one to three minutes, once or twice a day, actually “in” the water (with at least one hoof).

The reason is still a mystery, Clark says, but not the application of the findings. Given the small amount of time cows spend in streams, she thinks it’s better to help them cross more quickly than to try to keep them out. Thus the concrete walkways.

Clark’s proposals have sparked a debate in the agricultural community. While everyone agrees that cattle and water aren’t a good mix, they disagree on how money should be spent to control a seemingly infinite number of variables — from the size and shape of the pasture, to the size of herd, to the length and width of the waterway in question.

Ryan added that the Rural Water Quality Program in her county is one of the few in the province that offers grants for fencing, to between 75 and 100 per cent of the cost of materials (100 metres of fencing can easily add up to $3,500, before labour and upkeep). “It’s not that we exclude other options,” she says, “we just don’t fund them.”

But cash-strapped farmers don’t have much choice without broader funding. Clark is struggling to make other options available, ones more applicable to bovine behaviour.

Despite her sense that she has discovered a better cow/water management system, a nervous public appears more comfortable with universal fencing. Ryan says she receives letters, e-mails and the odd photograph every week from concerned citizens in the Cambridge, Ont., area who have seen cows standing in the Grand River, the town’s only water source, presumably having gone through breaks in the fences.

No photos or film of cows actually defecating in the river have crossed her desk yet. But people have seen it happen, she says. Anecdotes like this concern Clark, whose team’s evidence suggests just the opposite.

Furthermore, ecological complications don’t stop with fencing. The cow-control practice currently favoured by many farmers, environmentalists and funding bodies is called “buffering.” Buffers are strips of land between the fencing line and the watercourse, where saplings are planted and grasses are left to grow tall. Buffers keep livestock away from the banks, reducing erosion and stream-side defecation, while giving the aquatic ecosystem time to heal.

To the urban eye, it’s a pleasing solution. But Clark warns that buffers are a short-term measure. “We’re convincing ourselves we’re doing nature a favour,” she says, “when in fact we’re creating an unnatural situation. Sure, you get beautiful herbaceous cover, but in the long term, you’ll actually have a degraded watercourse.”

In 30 years, when the trees have become the dominant species along a stream, their shade will cut out the light and reduce ground cover, setting up a situation where spring runoff could again wash away exposed soil that may contain harmful bacteria.

Which direction do we turn, when so many options may lead us down the same contaminated path? Clark suggests the answer may ultimately rest in heading off the problem at the intestinal pass. She points to an ongoing and controversial study on diet by Cornell University and U.S. federal authorities that has linked the switch to corn feeding of beef cattle to the increase of E. coli 0157, the deadly bacterial strain that devastated Walkerton.

Corn-fed cattle produce a sweeter, more tender beef. The problem is, cows digest grains poorly. The starches in their intestines produce acids that encourage the growth of certain bacteria resistant to human stomach acids, or so the study claims.

If the study is right, and pathogenic E. coli is a function of diet, then we’ve solved the problem. But farmers have not been asked to change their feeding programs, because the research has not yet been duplicated by others.

Today’s farmers, then, are in an unenviable position. They want to be good environmental stewards, but whether they fill the grain troughs or push their herds back out to pasture (with or without fences), a lingering stench of doubt follows wherever they go.