Originally published in January 2005 in Art Gallery of Hamilton

Catalogue entry no. 65 in Lasting Impressions: Celebrated Works from the Art Gallery of Hamilton (2005) 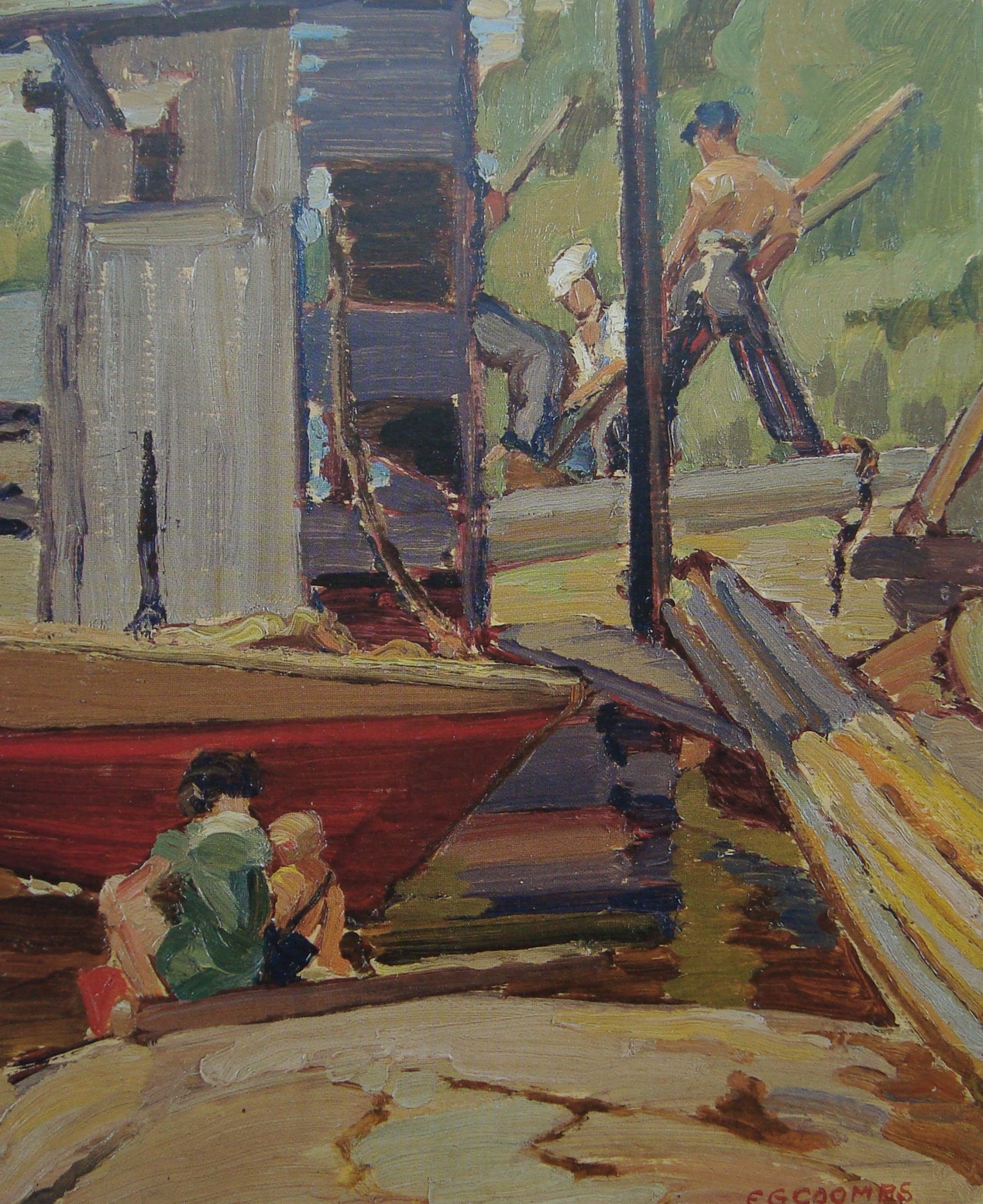 For a brief period in her career, before she became trapped in an endless and repressive cycle of flower painting, things seemed to come together for the Hamilton-born painter and Group of Seven protégée, Grace Coombs.

Excited by her freedom to travel and create, and encouraged by J.E.H. MacDonald’s personal interest in her progress —keep working and just “be yourself,” he said — Coombs crossed the North American continent painting whatever moved her with a sense of sweep and vigour.

On a trip to Haliburton, Ontario in the early 1930s she witnessed (or possibly invented) a scene at a sawmill yard that satisfied her love of the outdoors but that also allowed her to express a familiar subject in Canadian art from a decidedly female perspective. The result was Jack Ladder House. In this quick study of backwoods life, Coombs divides our attention between the confident body language of the barrel-chested logger, seen legs straddled in the top of the picture, and the two children in the lower left-hand corner, playing quietly in the shadow of the pointers (flat-bottomed rowboats used by loggers in river drives).

Images featuring people were rare in Canadian art during the 1910s and 1920s, a time when the national psyche was dominated by the landscape. But the river driver and his brother the lumberjack were exceptions, because of their athletic embrace of the land and their close involvement with the true star of Canadian art and industry — the tree.

When Arthur Lismer, J.E.H. MacDonald and Clarence Gagnon painted river drivers they were always shown in the heat of the action, riding the rivers, alone or in packs. In Jack Ladder House, by adding the implied presence of women, Coombs offers a more human, less iconic picture of these men. She introduces the idea that these folkloric outdoorsmen had real lives, with social connections and responsibilities as both husbands and fathers that went beyond the landscape. Back at the camp, we find them having to keep one eye on their work and the other on their children.

Coombs never repeated the bold juxtapositions and quick, confident handling she achieved in Jack Ladder House. Not long after finishing the work, she chose to back out of the contemporary art world and to let go of friendships with people like Yvonne McKague and Arthur Lismer. Sustaining these relationships would no doubt have challenged her powers of innovation and forced her to keep changing and growing. Instead, she gravitated towards the biblical community at the University of Toronto’s Emmanuel College, where she pursued her relationship with Jim Lawson, a Ph.D. candidate in theology and an internationally recognized sculptor of wax fruit.* It was Lawson who encouraged Coombs to focus more on flowers and plant life, and they began painting side-by-side and exchanging their efforts as gifts. After over fifteen years of dating, Coombs and Lawson finally married in 1942.

Although Coombs was not raised a Methodist, as an adult she chose to live by the words of Cardinal Newman’s hymn “Lead Kindly Light.” In order to be led by a higher power, she renounced her pride and willingly turned her back on the path that, in her younger days, had taken her through the Grand Canyon and up and over the windswept bluffs of Algoma.

* Today, many of Lawson’s sculptures of apples, pea plant tendrils and poisonous mushrooms are housed in the New York State Agricultural Experiment Station at Cornell University, where he spent several summers working. Admired for his colouring and painstaking texturing, Lawson was said to have pulled hairs from his arms and cut them to the proper length when fashioning the bristles for his raspberries.