You’ve got to have faith 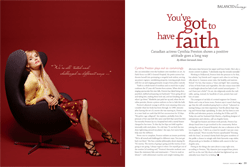 Cynthia Preston plays evil so convincingly she can intimidate even the huskiest crew members on set. As Faith Rosco on ABC’s General Hospital, the petite actress has thrown herself into portraying a vengeful mob widow, serving up poison cognacs, vandalizing property, running people down with her car and staging gymnastic escapes from police custody.

“Faith is a whole barrel of monkeys and so much fun to play,” confesses the 37-year old Toronto-born actress. When she’s not staging spectacular five-star falls, Preston has faked being shot, punched, stabbed and passing out backward. “I love going all out and taking hits, making them look real, and not breaking my fall when I go down.” Wardrobe just pads her up and, when the storyline permits, throws a prison uniform on her to hide the bulk.

Preston’s physical courage is all the more amazing when you consider what her body has been through. In 1989, minutes after leaving the set of a movie she was starring in, Preston was in a near-fatal car crash that left her unconscious for 10 days. “My pelvic cage collapsed,” she explains, probably from the pressure of her seat belt (the same seat belt that saved her life). For months Preston lay in a hospital bed with a metal fixator clamped to her torso. To this day her hips are held together internally with steel plates. On cold days “[I can feel] the ten- dons tightening around my plates,” she says, but warm baths help ease the stiffness.

Never one to complain, Preston radiates an innate positivity. “We’re all tested and challenged in different ways. You just get back out there.” She has a similar philosophy about staying fit. “It’s inertia. The inertia of going is going and the inertia of not going is not going. I always regret it when I let myself get out of the routine [of working out].” Preston’s favourite workout combines the stationary bike and stairmaster—“I love to read on [them]”—with abdominal crunches and weight training (she alternates days between her upper and lower body). She’s also a recent convert to pilates. “I absolutely reap the rewards mentally.”

Working in Hollywood, Preston feels the pressure to be thin, but admits “my friends and I support each other in not being silly about it. Common sense rules. Eat healthy and exercise. Period.” For her, that means a “clean and light” diet consisting of lots of fresh fruits and vegetables. She also enjoys meat dishes and laughs about her lack of self-control around pasta— “I can’t have just a little!” On set, she religiously avoids the craft table, opting, instead, for handfuls of nuts, protein bars and lots of water.

The youngest of six kids of a retired engineer for Ontario Hydro and a stay at home mom, Preston says it wasn’t that long ago that she still considered going back to school. “I planned on [acting] being a one-time experience,” but the phone kept ringing and Preston kept capitalizing. To date, she has been in over 40 film and television projects, including the X Files and CSI.Today she and her husband Kyle Martin, a Spielberg designer of animatronics and robotics, call Los Angeles home.

Through her busiest and driest work periods, Preston has always found time to get involved in the community. Before joining the cast of General Hospital, she was a volunteer at the Los Angeles Zoo. “I did it as a treat for myself. I am just crazy about animals.” Most recently Preston spearheaded “Evening with the Stars,” an annual charity bash that gives members of the public a chance to mingle with their favourite soap celebs. All proceeds go to families of children with cancer in the Los Angeles area.

Fitting in the things she cares about is easy right now, according to Preston, “My character just escaped from prison and I’m on the run! My shoot schedule has lightened up con- siderably [now that] I’m in hiding.”