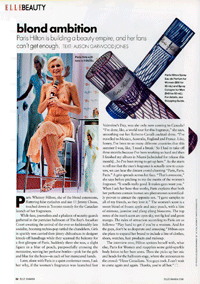 Paris Hilton is building a beauty empire, and her fans can’t get enough

Paris Whitney Hilton, she of the blond extensions, fluttering false eyelashes and size 11 Jimmy Choos, touched down in Toronto recently for the Canadian launch of her fragrances.

While fans, journalists and a phalanx of security guards gathered in the patrician ballroom of The Bay’s Arcadian Court awaiting the arrival of the ever-so-fashionably-late socialite, booming techno-pop rattled the chandeliers. Girls in sparkly tees carried their jittery chihuahuas in designer knock-off handbags while they scanned the balcony for a first glimpse of Paris. Suddenly there she was, a slight figure in a blur of peach, purposefully crossing the mezzanine, waving her perfume bottles — pink for the girls and blue for the boys — in each of her manicured hands.

Later, alone with Paris in a quiet conference room, I ask her why, if the women’s fragrance was launched last Valentine’s Day, was she only now coming to Canada? “I’ve done, like, a world tour for this fragrance,” she says, smoothing out her Roberto Cavalli cocktail dress. “I’ve travelled to Mexico, Australia, England and France. Like, honey, I’ve been to so many different countries that this summer I was, like, “I need a break.” So I had to take off three months because I’ve been working so hard and then I finished my album in Miami … So I’ve been trying to get up here.” As she starts to tell me that the men’s fragrance is actually new to counters, we can hear the distant crowd chanting “Paris, Paris, Paris.”

A grin spreads across her face. “That’s awesome,” she says before pitching to me the merits of the women’s fragrance. “It smells really good. It makes guys want you.” When I ask her how that works, Paris explains that both her perfumes contain human sex pheromones scientifically proven to attract the opposite sex. “I gave samples to all of my friends, so they love it.” The women’s scent is a sweet blend of frozen apple and juicy peach, with a hint of mimosa, jasmine and ylang-ylang blossoms. The top notes of the men’s scent are open sky, wet fig leaf and green mango.

The rules of attraction according to Paris are as follows: “Play hard to get if you’re a women. And for the guys, don’t be so desperate and annoying.” Hilton says she plans to expand her brand to include a line of clothes, shoes, watches, hair products and makeup.

The interview over, Hilton spritzes herself with, what else, Paris for Women and reapplies some gold-sparkle body lotion to her bare arms. Then she picks up her mic and heads for the ballroom stage, where she announces to the crowd: “I love Canadians. You guys rock. I can’t wait to come again and again. Thanks, you’re all hot.”