Originally published in July 2007 in The Globe and Mail 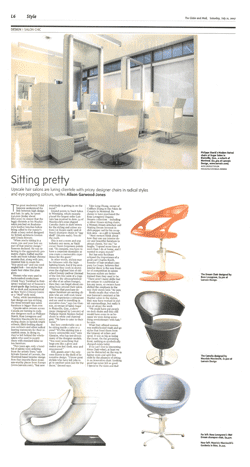 The great modernist Vidal Sassoon understood the link between high design and hair. In 1963, he spent £40,000 (today about $827,000) to ensure that the leggy clientele at his Mayfair salon perched on Bauhaus-style leather benches before being called to the master’s chair: a boxy swivel designed by British architects Gordon and Ursula Bowyer.

“When you’re sitting in a room, you and your hair are part of that interior design,” Sassoon declared. He was referring to the aggressively geometric chairs, buffed marble walls and bent tubular chrome accents that, along with jazz, inspired him to create his “five-point cut” and one-eyed angled bob – two styles that made hair shine like plate glass.

Women who were used to backcombed confections (think Tracy Turnblad in Hairspray) walked out of Sassoon’s avant-garde digs looking every bit as sleek and asymmetrical as New York’s Citicorp Centre or a “Mod”-style mini.

Today, while innovations in hair design are less striking, the trend toward luxe salon furniture is bigger than ever.

Upscale salon owners across Canada are turning to rock-star designers such as Philippe Starck, Ross Lovegrove and Maurizio Macciocchi for curvy styling chairs in lipstick-bright colours, illicit-looking shampoo recliners and other radical seating statements for their reception areas. In doing so, they’ve left behind the wholesalers who used to supply them with standard-issue salon furniture.

“Two years ago, only a handful of salons were ordering from the artistic lines,” says Sylvain Emond of Lanvain, the Montreal-based interior design firm that imports these museum-worthy pieces from Europe (http://www.lanvain.com), “but now everybody is getting in on the trend.”

Emond points to Vault Salon in Winnipeg, which recently placed the largest order Lanvain has received to date: 54 of Macciocchi’s cone-shaped Camelia chairs in dark brown for the styling and colour stations (at $2,500 each) and 18 Starck shampoo chairs in “eggshell” ($6,000 each). You do the math.

This is not a mom and pop industry any more, as Vault owner Daren Jorgenson points out. “To compete, you have to have a corporate mentality as you create a memorable experience for the guest.”

In other words, stylists may be virtuosos with the highlighting brush, but if the environment they work in shows even the slightest hint of old-school beauty parlour (instead of the Zen-like calm of a yoga centre or the ultrasophisticated vibe of an urban lounge), then they can forget about creating buzz around their salon.

“Salons that purchase designer furniture are serving clients who are well-read, know how to experience a restaurant and are used to travelling in executive class,” says Jon Giannos, co-owner of Salon Sugar in Blainville, Que., a showroom (designed by Lanvain) of Philippe Starck Modern Swivel chairs in white and charcoal grey. “We have to cater to their tastes.”

But how comfortable can it be sitting inside a cube or a cone? “It’s like sinking into a luxury automobile seat,” says Giannos, who has test-driven many of the designer models. “You want something that hugs you like a glove and makes you feel sleek, sexy and empowered.”

Still, guests aren’t the only ones drawn to the thrill of innovative design. “I know great stylists who have left jobs to go to another salon just for the decor,” Emond says.

Take Long Zhang, owner of Coiffure Zhang in the Palais de Congrès in Montreal. He claims to have purchased the Ross Lovegrove Organic Dreams collection – including 12 silver Dream styling chairs, a Woman Dream armchair and Waiting Dream loveseat in chili-pepper red for his reception area – as a gift to himself.

“Most owners think about how they can use interior decor and beautiful furniture to attract clients. Not me,” he laughs. “I spend more time at work than I do at home, and I wanted to enjoy myself.”

But has sexy furniture eclipsed the importance of a good cut? Charles Booth, founder of hair-product company La Coupe, believes that interior decor is the new frontier of competition in salons because stylists are better trained than they used to be. “There aren’t many skills that are unique to a particular salon any more, so owners have shifted the emphasis to the way their stores look,” he says.

Booth recalls that when he was Sassoon’s assistant at his Mayfair salon in the sixties, they may have worked in stylish surroundings, but really it was all about the work.

“We could have put people on deck chairs and they still would have come to us because we were doing something revolutionary with hair,” he says.

What they offered women was sophisticated wash-and-go styles that freed them from the tyranny of rollers and spray. It was as big as losing the corset. On the grooming front, nothing so symbolically charged exists today.

If we can’t live in interesting times (hair-wise), at least we can be distracted on the way to lighter roots and split-free ends by the pleasure of sitting in an innovative chair. Looking good has never felt so good.