Good till your last drop

Originally published in September 2007 in The Globe and Mail 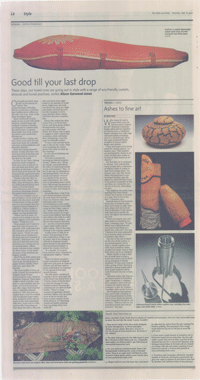 Old habits die hard, especially in the funeral industry. The preservationists (of bodies, that is) would have us believe that Cadillac-sized coffins are the only way to go. And, so far, most Canadians agree.

These traditional models, made of rare woods with plush interiors, metal linings and multiple coatings of shellac, are designed to comfort families and protect occupants from pushy tree roots, marching insects and runoff from downpours.

Inside the box, corpses can buy a little more time if loved ones book them for a disinfectant rinse in formaldehyde and mercuric chloride

Enter the conservationists. Sooner or later, the buzz over environmental footprints and green bins had to extend to our final act on Earth.

So here we are, then, talking about the most ecological, least toxic ways to dispose of our own flesh and blood, and deciding on the kinds of flowers we want to lie beneath. Will it be perfectly manicured petunia beds or wild honeysuckle?

“Death is the last taboo to come out of the closet,” says Mary Anne Brinkmann, director of the Natural Burial Association, a Toronto-based non-profit group that formed in 2005 to encourage alternative green burial practices.

When you combine our active avoidance of the subject of death with the shock and grief we feel when we lose a loved one, is it any wonder that the Canadian funeral industry is pulling in a billion dollars a year with the sale of deluxe caskets and big headstones?

“When you’re in tears, of course you’re going to say yes to the biggest, most expensive option,” Brinkman says.

What people don’t realize is that they have the power to negotiate with undertakers for the container and service of their choice. “There are ways the body can be returned to the Earth that isn’t wasteful or harmful,” Brinkman says. Ask and you’ll find that most funeral homes in Canada now offer biodegradable coffins: simple untreated pine caskets for about $200, or one-tenth the price of the polished mahogany models.

But if the no-frills option just isn’t you, there are many other ways to go, including groovy papier mâché caskets, whimsical urns and wispy silk shrouds.

The most stylish of them all is the EcoPod, the brainchild of designer Hazel Selene (http://www.ecopod.co.uk), based in Brighton, England. These lightweight caskets look like snap peas or yoga sneakers and are made of recycled newsprint and office paper held together with a vegetable cellulose hardener. After the pods are sanded down, they’re overlaid with handmade paper made from mulberry leaves and extracts of silk, then imprinted with dove, Aztec sun or Celtic cross motifs. Depending on how damp the soil is, they can take anywhere from eight weeks to six months to break down. Right now, the pods cost about the same as a high-end casket (around $5,000), but the company is set to mass-produce them, which will lower the price considerably.

Selene also makes the Arka Acorn Urn, a 10-by-80-inch brown and moss green chalice. Biodegradable urns have proved popular with Buddhists, but Selene tries to gently suggest to other clients that cremation, while still better than embalming, is not the most eco-friendly option.

“It uses a vast amount of energy to fire up the ovens. Then we’re polluting the atmosphere with what we send up the chimney.”

So who else is thinking outside the box?

“All types of people are showing an interest in green burials,” Selene says. “Some are deeply concerned about the effect of traditional burials on the environment.” They object to the use of carcinogenic embalming fluids, rain-forest woods and “green concrete” (eco-speak for the lawns in most cemeteries). The latter rely on phosphate-heavy fertilizers, discourage the growth of native flora and fauna and are a waste of water and energy to maintain.

Esmerelda Kent, a San Francisco-based designer of burial shrouds made from herbal-lined raw Dupioni silks, linen and hand-spun wools (http://www.kinkaraco.com), and a former consultant on the HBO series Six Feet Under, sums it up: “Those who believe the body is the person try to preserve it into infinity. But those who believe the body is a vehicle of a person’s essence – and that it’s the essence that lives on – are less concerned about copper-lined vaults and airtight caskets. They’re the ones turning to the organic option.”

It takes years to shift an industry (the greening of cars and construction being a case in point). But if the change in attitude in England toward green burials is any indication, then the funeral industry is poised for a major overhaul.

“In a decade, we’ve gone from dyed-in-aspic Victorian to significantly organic,” Selene says.

There are about 250 green burial cemeteries in England right now and more to come as farmers sell off their land to green undertakers in response to the spread of foot and mouth disease.

The first green cemetery in Canada is set to open next fall at the Royal Oak Burial Park in Victoria. Selene believes there is room for change in every Western country because governments see no value in dead bodies. “There’s a huge amount of legislation around newborn babies, who are going to be of use to society, but none around corpses. If you think about it, it’s liberating. People are finally realizing they can design their own send-off.”