Originally published in January 2008 in Canadian Home and Country 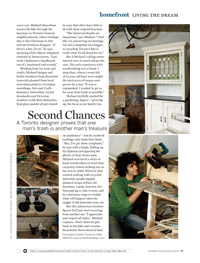 Each day, Michael Simardone weaves his bike through the laneways in Toronto’s historic neighbourhoods, where Garbage Day is like Christmas to this custom furniture designer. “If there’s a bin, I’m in,” he says, speaking of the objects relegated curbside by homeowners. “Last week I fashioned a headboard out of a baseboard and mantel.”

Working from his west-end studio, Michael designs and builds furniture from discarded materials gleaned from local renovation projects. Georgian mouldings, Arts and Crafts banisters, Edwardian crystal doorknobs and Victorian windows (with their distinctive float glass panels) all get reused in ways that often have little to do with their original

“The historical details are important,” says Michael. “I feel like I’m preserving our heritage. I’m also a longtime tree hugger, so recycling Toronto’s bits is really what it’s all about for me.”

But if Michael’s calling seems natural now, it wasn’t always the case. His early experience with woodworking was a Grade 7 shop class, where a room full of 13-year-old boys were taught the intricacies of tongue-and-groove by a nun. “It was so regimented, I wanted to get as far away from trade as possible.”

Michael dutifully studied for a psychology degree — “growing up, the focus in my family was on academics,” he says — but his textbook readings only made him think, “‘Hey, I’ve got those symptoms.’” Rolling up his diploma and ignoring the ghosts of shop classes past, Michael convinced a series of local woodworkers to teach him carpentry before striking out on his own in 2000. When he first started working with recycled materials, people happily donated scraps of their old furniture. Lately, however, he’s been paying to take it away, and he sometimes stops to wonder what will happen when the supply of old materials runs out.

But this industrious inventor figures he’ll just start recycling from another era. “I appreciate and respect all styles,” Michael explains. That’s when he gets back on his bike and resumes his journey down memory lane.