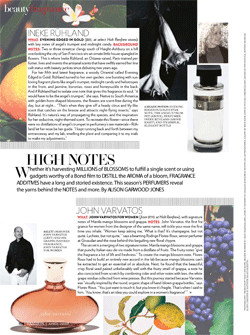 [Winner for “Best Print” at the 2009 Canadian Fragrance Awards]

Whether it’s harvesting millions of blossoms to fulfill a single scent or using gadgets worthy of a Bond film to distill the aroma of a bloom, fragrance additives have a long and storied existence. This season’s perfumers reveal the yarns behind the notes and more.

What: Evening Edged in Gold ($85, at select Holt Renfrew stores), with key notes of angel’s trumpet and midnight candy. Background Notes: Two or three streetcar clangs south of Haight-Ashbury on a hill overlooking the city of San Francisco sits an ornate little house spangled in flowers. This is where Ineke Rühland, an Ottawa-raised, Paris-trained perfumer, lives and invents the artisanal scents that have swiftly earned her line cult status with beauty junkies since debuting two years ago.

For her fifth and latest fragrance, a woody Oriental called Evening Edged in Gold, Rühland turned to her own garden, one bursting with sun-loving fragrant plants like angel’s trumpet, midnight candy and heliotropes in the front, and jasmine, boronias, roses and honeysuckle in the back. And if Rühland had to isolate one note that gives this fragrance its soul, “it would have to be the angel’s trumpet,” she says. Native to South America, with golden horn-shaped blossoms, the flowers are scent-free during the day, but at night… “That’s when they give off a heady citrus and lily-like scent that catches on the breeze and attracts night-flying insects,” says Rühland. It’s nature’s way of propagating the species, and the inspiration for her seductive, night-themed scent. To recreate this flower—since there were no distillations of angel’s trumpet in perfumery’s raw materials—Rühland let her nose be her guide. “I kept running back and forth between my entranceway and my lab, smelling the plant and comparing it to my trials to make my adjustments.”
John Varvatos

What: John Varvatos for Women (from $110, at Holt Renfrew), with signature notes of Manila mango blossoms and grappa. Notes: John Varvatos, the first fragrance for women from the designer of the same name, will tickle your nose the first time you inhale. “Women keep asking me, ‘What is that? It’s champagne, but not quite. Lychees, but not quite,’ says a beaming Rodrigo Flores-Roux, senior perfumer at Givaudan and the nose behind this beguiling new floral chypre.

The secret is a merging of two signature notes: Manilla mango blossoms and grappa, that punchy Italian eau-de-vie made from a distillate of fruits. The fruity notes “give the fragrance a lot of lift and freshness.” To create the mango blossom note, Flores-Roux had to build and entirely new accord in the lab because mango blossoms can’t be extracted to get an essential oil or absolute. Next, he found that the beautiful, crisp floral seed paired unbelievably well with the fruity smell of grappa, a note he also concocted from scratch by combining cider and ether notes with lees, the white grape residue collected from wine presses. But this journey started because Varvatos was “visually inspired by the round, organic shape of hand-blown grappa bottles,” says Flores-Roux. “You just want to touch it, but you know it’s fragile. That’s when I said to him, ‘You know, that’s an idea you could explore in a women’s fragrance!’”

What: The Beat (from $72, at the Bay), with key notes of bluebells and Ceylon tea. Background Notes: Since opening its first boutique in 1856, Burberry has had an eye on nature—mostly raindrops and mud. After all, this is the company that famously wrapped Audrey Hepburn in its buff trench for the downpour scene in Breakfast at Tiffany’s.

Burberry’s outdoor tradition continues right down to its latest fragrance, The Beat, a woody floral. Oh sure, the bottle says “effortlessly cool”—what with its sleek curves and chrome collar—but pop the cap, and the notes are English to the core. Even its spokesmodel, the fierce, pixied Agyness Deyn, is really one Laura Hollins of Lancashire, a former chip-shop girl and no stranger to splattered Wellies.

“One of the first things I said to the noses was that I liked this idea that you are walking,” says designer Christopher Bailey. “At my country home in Yorkshire, I always wander around my field or in the garden.” In fact, in his first brainstorming sessions with perfumers Olivier Polge, Béatrice Piquet and Dominique Ropion, Bailey described fields and forests with thick carpets of bluebells and outcrops of dead wood. “It’s just a very particular smell,” says Bailey of the wood. “I think the noses have captured it beautifully.”

Polge says the bluebell accord was made possible through “headspace” technology, which captures the scent of the bloom. “We don’t have natural extracts of bluebell, so we analyzed the flower and found ways to recreate the smell,” he says, adding that “Christopher had the idea of using typical English ingredients.” The floral notes are rounded out with cedarwood, but the real surprise was the addition of actual extracts of Ceylon tea, also typically English, which Polge says is the most important element.

What: Bouquet (from $90, at select Bay stores), with a heart of jasmine sambac. Background Notes: It’s said that a successful marriage requires falling in love many times with the same person. And so, too, for designer Vera Wang, a successful fragrance franchise means recapturing our hearts and minds with a surprising new take on a timeless emotion and rite of passage.

This spring, the house of Wang is sending its newest matrimonial scent down the aisle. Bouquet, a fresh green floral, is the follow-up to the rosy essence of last year’s Truly Pink and the white floral centre of 2005’s Sheer Veil. “It celebrates one of the most anticipated days in a woman’s life,” says head perfumer Loc Dong, who worked alongside Wang in developing the scent. Together, they have created a ladylike arrangement of paperwhite narcissus, honeysuckle, lavender and white irises. Dong chose jasmine sambac, an elegant, night-blooming flower that symbolizes sweetness and purity, as the starting point for Bouquet. “It takes 700 kilograms of sambac flowers to create one kilogram of essence,” says Dong. “That’s the equivalent of 6 to 8 million individual blossoms or 1,400 hours of picking.”

Industry insiders say Hilfiger’s European business has been outpacing growth in the U.S., which may explain the brand’s sexual awakening. But Trudi Loren, vice-president of corporate fragrance development worldwide for Aramis and Designer Fragrances, says the “voila moment” for the scent came during a summer stroll in the Italianate gardens of the Parrish Art Museum in the Hamptons.

“We wanted to do something more timeless and emotionally driven,” says Loren. “The peach symbolized what we wanted to convey. There is a texture to peach skin, and that sensuality and organic roundness and feel of the peach. We used a natural peach juice flavour and balanced it with a background note of tuberose, which creates a fluttering sense of movement, like the feeling you get when you’re in love.”

What: Rose Alexandrie (from $135, at select Holt Renfrew stores), with a heart of Grasse roses. Background Notes: For a clothing designer dubbed “the master tailor” and often described as reserved, tightly wound and ever in control, Giorgio Armani is, surprisingly, a pure sensualist in the field of perfume.

That’s not to say the master doesn’t apply his laser-like focus to every detail of his Armani Privé haute couture collection of fragrances. Rose Alexandrie, one of the two Les Eaux fragrances new to the Privé line, was inspired by the designer’s interest in nature, the history of perfume and civilizations past.

In this case, he looked to legends of the famous gardens of Alexandria, Egypt. An oasis in one of the most sophisticated and learned centres of the Hellenistic culture, the Nile-fed gardens were said to be thick with the fragrance of roses. Their unchanging beauty was described by one Victorian historian as so complete as to be monotonous—to which Armani might say (or think), no, just consistent and beyond compare. Much like his designs.