Originally published in March 2009 in Canadian House and Home 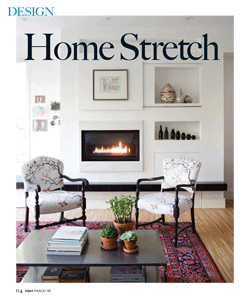 A Toronto tastemaker breaks through walls, walls and more walls to create a serene, open space

Inspiration usually strikes Alison Booth in the morning. That’s when her best ideas drop like coins from a winning slot machine. Take the morning she woke up her husband, Jeff Campbell, exclaiming, “Flocked chartreuse wallpaper! That’s what our bedroom needs.” A few mornings later, she had another epiphany: “My mother was right: we should have a range hood in the kitchen. But let’s hide the fan in the ceiling and….” By this point, Alison — a design consultant and stylist with her own company, Booth Supply (clients include style brands Fluf, Smythe and Virginia Johnson) — was on a roll. “And we can tuck the microwave and toaster oven inside invisible drawers that pull out from the wall. And….” Today, she admits, “I fretted for months trying to figure out those hidden storage spaces.”

After living in a 400-square-foot New York bachelor for three years while Alison attended the Parsons School of Design and then worked as a design assistant at handbag purveyor Coach, the couple moved into a Toronto semi “the width of a streetcar.” Three years later, the pair — by then parents to 1-1/2-year-old Lyla and expecting son Max — were ready for a home that allowed more freedom of movement and had less clutter. “I’m not as neat as I’d like to be, so the more I can design into a space using hidden storage the happier we all are,” Alison admits. Like the handbags she used to help design, the hidden compartments in her new home incorporate enough flaps, touch latches and moveable parts to rival a children’s pop-up book. But it took nearly a year of renovations to get everything just so.

With its vast stretches of honey-coloured hardwood flooring and minimalist white walls, it’s hard to imagine the spacious, light-filled house in its former state. “It was a rabbit warren of narrow halls and tight turns,” insists Alison. Alison and Jeff, who works in finance, initially fell for the three-storey Tudor simply because it was detached. Thinking ahead, however, they realized its generous 2,800-square-foot layout could also accommodate their circle of friends and, one day, two teenagers. So with the help of Toronto architect Michael Preston and contractor Nick Upton, they began transforming the main floor into an understated and free-flowing modern space by tearing down some walls and stripping the rest of their ornate mouldings. A two-storey 13-by-18-foot addition at the back of the house gave them the family room they wanted: one banked by tall sliding glass doors that open onto a leafy backyard. Above it is the equally airy new principal bedroom.

But it wasn’t until the couple installed recessed lights, dressed the floors in off-cut oak and unpacked their mid-century-modern lamps that the house started to approximate their vision of a stylish abode. On vacation in Iceland last year, Alison wandered into a café with an entire wall of recessed shelves, all different- sized and arranged like a Mondrian painting. She snapped a photo of it, and, once home, adapted the concept for the family room’s feature wall, which houses the fireplace and hides the TV, a DVD player and the stereo equipment in variously shaped hidden nooks. She had also picked up a book on Icelandic interiors at the airport. “Alison carried that book around during the renovation as inspiration for all of us,” says Upton. Designs with a clear, functional purpose and an emphasis on simple structures and rhythms — which appeal to Alison’s desire for order and openness — informed other elements of the main floor’s aesthetic: a sleek granite banquette that runs below the fireplace offers seating and keeps toys and DVDs off the floor; a husky oak dining table and bench, over which Alison draped a soft flokati rug, reiterates the simple vibe. Despite the precision and planning, Alison and Jeff aren’t precious about their home. “The point of the house was to not be worried about anything,” says Alison. Visitors keep their shoes on and the big serene spaces on the main floor are more often like a busy highway on which Lyla and the neighbourhood kids ride their toy tractors and ladybug cars. And it isn’t perfect — yet. “We’ve barely touched the exterior,” says Alison. “But we’re not rushing to finish everything, because you still have to have a life.” She’s confident the ideas for the outdoor updates will come tumbling forth on some other morning.

UNDRESS WINDOWS
Maintain a bright, airy feeling with hidden blinds that rise from the bottom or lower from the top of the window — they control sunlight or increase privacy when needed, then retract out of sight.

COLLECT TREASURES
Don’t rush to fill an empty space with pricey pieces that don’t feel personal. Objects have meaning when they have a history (a chair from your grandmother), heart (an anniversary gift) or a good memory attached (a vacation memento). Build a life and let the objects follow.

LIGHTEN UP
Shine a spotlight on treasured objects. Accent lights give every objet stage presence.

DECORATE IN THREES
The asymmetry of trios is effective when crafting displays. Alison has three potted plants on the coffee table, three recessed kitchen shelves, three pendant lights over the kitchen island and three vases on the dining table.

DON’T SHY AWAY FROM PATTERN OR COLOUR
Instead, use strong colours and graphic patterns to balance each other and add interest. In the powder room, Alison painted the ceiling pink to complement the cowhide-patterned wallpaper; in the principal bedroom, she balanced the flocked wallpaper with a vibrant upholstered chair; wide pink and white striped wallpaper enlivens the laundry room.