Originally published in December 2010 in Style at Home 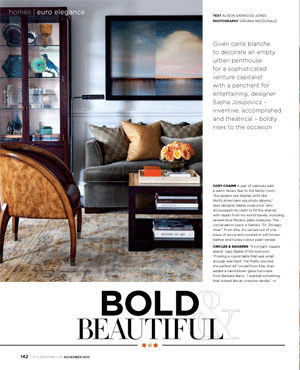 Given carte blanche to decorate an empty urban penthouse for a sophisticated venture capitalist with a penchant for entertaining, designe Sasha Josipovicz – inventive, accomplished and theatrical – boldly rises to the occasion

When a friend introduced Sasha Josipovicz, a design partner at Toronto’s Studio Pyramid, to his latest client, a venture capitalist with an unfurnished 3,000 sq. ft. penthouse, it felt like serendipity. What else but fate could bring together a homeowner with neither the time nor the inclination to flip through colour swatches, test drive sofas and arrange accent pillows, and a daring designer who throws himself into projects with unbridled enthusiasm and determination? “He asked me, ‘Can you take care of everything, including the plates, flatware and towels?’” says Sasha, who describes the three-bedroom uptown Toronto condo as his client’s weekend pied-à-terre for cocktail parties and intimate gatherings with family and friends. “Sasha reads people well,” says the homeowner. “When you have that kind of intuitive understanding, you’re bound to work well together.”

The homeowner’s words were borne out by the sumptuous results Sasha achieved. The homeowner wanted something comfortable – not overly traditional or modern, but very simple and elegant and with lots of natural light. To which Sasha said, “Then we’re going to paint the place Benjamin Moore’s Oxford White and, in return, you have to give me good art.” It was the first of many things the two men gladly shook hands on. Sasha decided a European salon feel would best suit his cultured client.

To avoid making it too stuffy or saturated, he opted for a few classic pieces of furniture to ground each room. In the 40′ long living room – the setting for biweekly cocktail parties – Sasha installed two 4′ x 7′ gilded mirrors. “They have a simple Empire look and help break up the large space into smaller sections.” A colourful, kinetic Katherine Harvey abstract from the Nicholas Metivier Gallery, installed above a pair of plush oyster-colour Barbara Barry couches, pulls guests from the foyer into the living room. “The piece had everything we were looking for: strong brushstrokes and a dreamlike quality,” says Sasha.

In the family room, he “introduced gold, saffron and dark spice tones in the accents and furniture.” Instead of mirrors, he installed two Vanguard display cabinets on either side of a stunning sunset painting by Scott Steele. Sasha grounded the space with a softly patterned Ushak rug foa warm and relaxed setting. “The family room is where my client likes to spend time with his grown kids or his buddies,watching ball games or reading.”

The kitchen faces west, as do the family and living rooms, offering a front row seat to watch the setting sun. The Oxford White walls turn a soft pink at dusk. “I wanted nature to provide the colour, so I kept everything else clean and simple,” says Sasha. He chose small, sculptural pendant lights to avoid detracting from the view. The only room without a vista is the dining room. “That’s how it should be,” says Sasha. “When dining, it’s important to be concentrating on your guests and the topic of conversation, not looking over one another’s shoulders at what’s going on outside.” Light enters the dining room via the adjacent living room, and after sunset, the steel blue Japanese silk walls and ebonized mahogany table and sideboards feel moody and sensuous. And when it’s just dark enough, the homeowner turns on the Thomas Pheasant chandelier above the table. It throws patterns on the ceiling, enchanting guests and getting them in the mood for the sparkle of the season.