The Internet Age heralds a shift in human nature

Facebook (est. 2004 in a stinky Harvard dorm) took almost five years to attract its first 150 million users, but only eight months to double that number, says The Economist in a Special Report on Social Networking.

As a social platform initially designed to share tipsy pics and Saturday night plans, it’s becoming clear, and pretty fast, that Facebook has created a shift in human nature so significant it will require the funding of new university departments and specialized chairs to track and analayze its influence (I predict, before long, Social Media Studies will swallow campus Centres for Information Technology, which now sound so Web 1.0 — you know, so Felicity with her Palm Pilot and clam shell MacBook Pro).

The buzz that circled the world started around February 2009. That’s when Facebook and Twitter moved outside the world of twentysomethings and began seriously pecking at global business and communications. (at least, that’s the first time I noticed national newspapers in Canada, like The Globe & Mail, talking about this new Twitter thing. The rise of Twitter quickly fed back into the growth of Facebook as people started cross-linking their networks).

But changes in technology are not what’s significant here, says Cathy N. Davidson, a humanities professor at Duke University in Durham, N.C. What’s significant and “shocking,” she says, is our changed behavior. “The interactive process has replaced linear progress as the highest form of human endeavour.” As she explains it, “[What] the Internet Age teaches us [is] that we must be able to change, adapt and colloborate in situations where the end result is unpredictable.”

We’re not used to unpredictable end results, as history will attest. For at least five centuries we have equated scientific and technological progress with social change that’s continuous, consistent and irreversible, even predictable. The rich and the royal (think: the Medicis, the queens of England, France and Spain and countless popes in centuries past) fed and lodged artists and inventors, then hoarded their inventions (compasses, canons and square-rigged sails) and used them to expand and maintain their empires. (here I tip my hat to the research of Theodore Caplow)

But the internet is toppling the monopolies of our modern day Medicis, not to mention changing the fortunes of the inventors by distributing their wares to more users. More importantly, our definition of power is being re-written right before our eyes. The sand castle-like collapse of print media in the last year, and the impotence of its longtime rulers (think: Rupert Murdoch) is a good example of how the Internet Age is forcing the elite to share their power with the people. We all own (and tell) the news now, and like the troops who raided Versailles 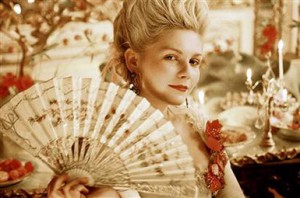 and strong-armed Marie Antoinette into the back of a carriage, who doesn’t love a freshly toppled monopoly and access to the halls of power? (Look, for example, at this nine year old blogger in the front row of Paris fashion week back in January. Similarly, last year Anna Wintour, Vogue’s Queen Bee, had to sit beside a 13-year old blogger. O. M. G.).

There’s been nothing like this overthrow in the history of mankind. Now anyone with a PC has a front row seat as it unfolds. I mean, think about it: the majority of those who lived through the most active phase of the Industrial Revolution were never aware of it.

Not us. We’re talking and linking about it like crazy.