Remains of the day

I got a lot of moving feedback the first time I wrote about my mother, Catherine, in The Long Goodbye, published three years ago on this blog. After she died last Christmas, I expanded on the story of our relationship and turned it into a magazine piece for Glow Magazine. It’s in the May issue, on newsstands for just a few more days. Happy Mother’s Day. I dedicate this to Peter and Richard.

y mother knew her entire adult life what was coming. Confirmation arrived the day she shuffled into the kitchen, swung open a cupboard door, then turned to me and asked, “Where are the singing noodles?” On that day, I stopped leaning on Mum and started extending a protective hand. Before long, pots began appearing in the oven and car keys in the fridge, while Post-it Notes with basic English words multiplied across every surface of the house—all quirks of the onset of Alzheimer’s, the disease that took her mother 30 years earlier.

Nothing deletes one’s individuality so completely as Alzheimer’s. Its imprint is the same in everyone who gets the diagnosis; they all disappear down the same path, exhibiting more or less the same set of behaviours. Most go from unique citizens of the world to nervous fusspots crying “No! No! No!” (the last word in their drained vocabulary), and then to silent bodies with gaping mouths and fixed stares. That’s why I prefer to think about what made my mother unforgettable, before age flicked a switch and unleashed this great leveller.

For someone born before the Crash of ’29, my mother had a remarkably liberal view of a woman’s place in the world. She honoured the individuality of every soul she met, so unconventional choices—like making art full-time, or not having kids—never sent her into a tailspin, unlike some women in the neighbourhood. In her day, women attached themselves to men like the stateless to lifeboats, their fortunes rising and sinking with their rescuers. All too often, you married the man you wanted to be: aspiring novelists teamed up with writers (becoming their typists, first readers, editors, even ghostwriters), while nurses said “I do” to doctors and vowed to always pass the scalpel but never perform with it. Mum believed in developing a person’s potential, not denying it. 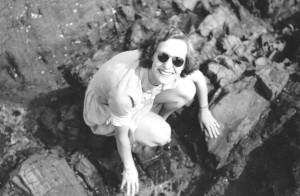 When I grew up and decided that filling a blank page with words constituted a large chunk of my identity, she was right beside me. During that formative period, she didn’t interrupt my progress to tutor me about men. I now see that was deliberate. Back then, I had no interest in integrating my personal and creative lives. What were guys to books? When we did talk men, she just smiled, looked me straight in the eye and said, “You’ll have to figure that one out on your own.” Confounding, but true.

All the while, she kept feeding my individuality. Every time I came home at Christmas, there was a new book on the end of my bed, touching on one of my interests: painting, history, biography. Those volumes have moved with me to every place I’ve lived in since university: There’s the doorstopper, Paintings in the Musée d’Orsay, the elegant Chinese Brush Painting Techniques and Anne Morrow Lindbergh’s Gift from the Sea, an ode to the forces that shape a woman’s life. Mum owned about five editions of Lindbergh’s book, some with line drawings of shells, others with thick, creamy, deckle-edged pages. When it was revealed several years ago that the author’s husband, Charles, had fathered two families—his famous one with Anne and a secret one with a German hat maker more than 20 years his junior—Mum was too sick to know. But I think I can guess what she would have said, or not said. She wouldn’t have rolled her eyes like a know-it-all or uttered something cynical about men. I’m positive she detected it in Anne’s lucid and compelling writing. Like Anne, pain only increased my mother’s grace.

[pullquote]I said she reminded me of a young Princess Elizabeth: efficient and sensible most of the time, but stunning when you least expected it.[/pullquote]

I don’t know if, as a young woman, Mum fretted about her marital destiny. I never asked. Clever and capable, she could have supported herself teaching piano or assisting a company president. And yet she had a charm and grace that deserved an outlet and some focused attention. When she spread red Max Factor on her lips, she dazzled enough to startle her future mother-in-law to the point of distrust. And more than once, during her younger days in London, England, she tripped up the men she passed on the way to her secretarial job near the city’s Marble Arch. Teasing wasn’t her style, but I’m sure times like that, when she distanced herself from the starched-wimple set, pleased her. I said she reminded me of a young Princess Elizabeth: efficient and sensible most of the time, but stunning when you least expected it. It was hard not to do a double take of my mother when she stained her lips and stood with a drink under a sparkling chandelier, smiling and talking about the things she cared about. Her natural vivacity pulled everyone toward her.

No one knows what Alzheimer’s looks like from the inside out, but Mum gave us a hint. She was acutely aware of everything she was losing and the declarations just poured out in the end. “I want you to be happy,” she said, still not serving up a prescription for how I should get there. “I love that guy,” she stated, smiling and pointing to my dad, sitting next to her in his La-Z-Boy watching the Golf Channel. She must have said “I love you” to him more times in her last year of speech than in the final two decades of their 60-plus years of marriage. Most times, he was too busy staring at the TV—wincing at a missed putt—to hear. But he knew, and we knew, because she was telling the whole world. I’m glad I witnessed this as an adult. The romantic in me wants to believe in love’s power to cut through chaos, disappointment and change.

A few months before we handed Mum over to the care of a team of nurses, she called and left a message on my answering machine. Something in me said, This will be the last time she picks up the phone and dials my number. My hunch proved true. I played her message over and over that week, then popped a blank tape in my boom box and pushed “record,” so I’d have her voice with me forever.

It’s been 12 years since she left that message and I haven’t listened to it since. I can’t. At that moment in time, she put aside her doubt and fear for herself, and with a shaky, lilting voice she said: “I miss you, Alison. I just wanted to let you know I think about you every day and hope that everything’s going well in Toronto. I love you.” From the commotion, I could tell she missed placing the receiver in the carriage on the first try. That vulnerability makes my knees buckle every time I think about it.

Catherine Garwood-Jones died on Dec. 9, 2012, one year after her husband, Trevor. 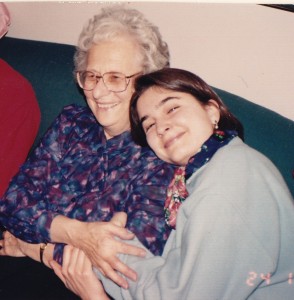 4 responses to “Remains of the day”