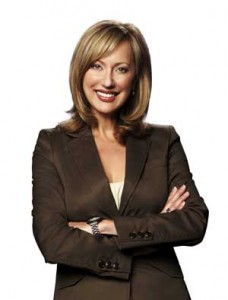 Anne Mroczkowski has thought about it, but gender is one rabbit hole she doesn’t want to go down, at least not in public.

Last month, the award-winning journalist and co-host of Toronto’s CityNews at Six on City TV was fired. She was one of about 35 staffers handed their walking papers and one of seven on air reporters (six women and one a man) to go “poof” in these tough economic times. Mroczkowski’s longtime co-host, Gord Martineau, is now manning the ship on his own.

Two weeks ago when the CBC’s Anna Maria Tremonti sat down with Mroczkowski to talk about her 23-year career at City and ask what’s next, each tensed up over the issues of age and gender. Both women are highly accomplished, whip-smart and gracious, so the idea that one of them may be banging up against the invisibility curse so often bestowed upon women at a certain stage in their life and careers is downright deflating. For all of us. All those years of hard work and for what? The only thing Mroczkowski had to say was that she didn’t think she’d be working in front of the camera again.

Film directors Nora Ephron (Julie & Julia) and Nancy Meyers (As Good As It Gets and It’s Complicated) have thought about this too and are determined to give the growing contingent of accomplished, but invisible, women a place to go (at least in film). Their entertaining pictures depict women in their fifties and sixties with great jobs and satisfying sex lives, and no one goes, “Eeww,” or looks away (at least not in the mixed theatre crowds I’ve been in).

I should mention, this is hard to discuss in a public forum. I’m not some tough-minded broad who couldn’t give a shit about what others think of her. A side of me would still like people to think birds hang my laundry. But I’ll be that age some day and I hope I’m going to a good place. That’s why I’m asking questions now.

Of course, the challenge for women who ask a lot of questions (every woman I know) is that our searching dispositions and bald observations about life’s double standards can often be labelled as griping. So we make choices: the easy one is to keep quiet so everyone can hear the sound of the birds chirping; the hard one is to say what you think and weather the reaction.

That second option takes courage. Sometimes when I say what’s on my mind, the saried matchmakers in the Bollywood blockbusters I’ve seen invade my dreams at night (they will tonight, after this post). They dance and trill and issue warnings like, “Don’t say anything too intelligent,” in between all their wavy hand movements.

I can’t help but wonder what sort of fall-out this kind of behaviour will have on me personally in the long run? I should add, when I’m in full-on questioning mode it’s hard not to think of those movies where the feisty female lead has to die in the end because it’s too hard for the director and producers (mostly suits) to imagine what sort of life a woman could lead after she’s asserted herself. (Help me here, people, I’m trying to come up with an example I can link to. I know they exist; I’ve read enough Johanna Schneller film reviews [love her!] to know about this yet-to-be-named sub-category of chick flicks).

That’s why we need more directors and producers (women and men) telling cradle-to-grave stories of women’s lives on the big and small screens. No more of this stopping a quarter of the way through with a fairy tale wedding or a weepy cancer diagnosis. If this were to happen — if women could see all of the decades of their lives chronicled in technicolour — I predict the sale of wrinkle creams would go down because women wouldn’t have to rely as heavily on the promise of cosmetics to avoid being ignored. Aging wouldn’t be the stressor we’re currently shown and told that it is if ordinary women’s entire lives were honoured more publicly. After all, most of us keep living past 25, and then go on to outlive the men in our lives. Dove addressed this imbalance in their Campaign For Real Beauty, but, still, it left only a small ding on our culture.

Let me wind down this post by saying, I think we’re at a point in history when the great psycho-cultural question isn’t Freud’s, What do women want? We’re past that. The question du jour is, rather, What do we want from women? And women of all ages.

In a few short decades (and after centuries of deliberately under-performing), women in the West have shown en masse what they’re capable of in operating theatres, court rooms, newsrooms and beyond. But, apart from a few exceptions — like Meyers and Ephron, More Magazine and Zoomer Magazine — pop culture persists in turning away from us the further along we are in life’s journey.

I’m hoping that the members of the generations who graduated with Anne Mroczkowski and Paula Todd, as well as Hillary Clinton and Margaret Wente, will reject this pattern of disappearance, especially in professions that show women aging before our eyes. Do we really want to stop looking at and listening to Mroczowski in favour of a recent college grad? If the answer to that is Yes, then how do we change that to a No, not necessarily? What steps does society have to take to open people’s minds and eyes to a new way of looking at women?

The biggest thing I’ve learned since I started this blog last month is that our view of human nature is remarkably flexible (or fickle!). Through the centuries, it has evolved from downright disturbing (we’re all sinners, according to the church; yeah, seething sexual monsters, added Freud) to empathetic and hopeful (remember the “mirror neurons” I described in my post on March 1st?).

If we’re that flexible, I’m thinking we may just be capable of changing our stance on women and aging from one of rejection to full acceptance.

4 responses to “Best before dates”