Day traders: then and now 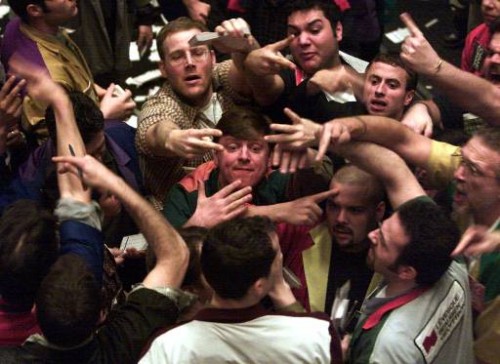 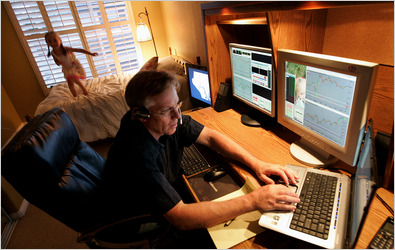 Four blog posts down, on March 19th,  I looked at the male-dominated culture of day trading.

After the hard lessons of September 2008 (September sure has proven to be a calamitous month, hasn’t it?), I wondered how and if we can change the recklessness of this species of capitalists?

“Do you put each trader in a single enclosed office space away from his buddies?” I asked.  I said that because researchers at the University of California published a study in March 2008 that found that men in group situations, like trading floors, are more likely to engage in risky decision making because they get caught up in issues of relative social status and dominance.

Well, I think I got an answer — or, at least, part of it — on my doorstep this morning. According to a front page story by David Segal in the business section of today’s New York Times, the Great Recession has given rise to a more mellow trader, while virtual trading is slowly starting to replace frenetic trading floors.

“You expect [all traders] to be revved up and antsy,” Segal points out. After all, the old way, summed up by the picture at the very top of this post, was a mosh pit of testosterone. “Remember the day traders?” asks Segal in the killer opening paragraph to his article. “They were hard to miss during the tech-stock mania a decade ago, when the NASDAQ seemed like a casino built by morons and a chimp with darts could pick winners.”

The Great Recession has sent many a day trader back to the comfort of his own home (I say “his” because they’re still almost all guys). The Red Bulls, the chest bumping, the swearing and the occasional spontaneous fist fights (à la the NHL) have been replaced by the hum of refrigerators, kids playing and dogs barking at the mail man, as evidenced in the second photograph by Times shutterbug, Sandy Huffaker.

The tone these home-based traders set, says Segal, is more akin to “members of a mellow Southern California rock band that split up 15 years ago. The most agitated [they] get while trading online is the occasional ‘goddangit.'”

These guys are a part of the new frontier in online trading. They use all the latest crowd-sourcing tools available on the internet: You Tube, Twitter and GotoMeeting, a Web conferencing service. Because trust in institutional investors (the chimps with the darts) is at an all time low, investors are starting to look elsewhere for answers, according to Segal. “[The old-style trader] nearly blew us all up with leverage,” says Howard Linzdon, co-founder of StockTwits, in an interview with the author.

That’s not to say that people aren’t hiring professionals to manage their investment portfolios. They are. Who has the time or the knowledge to do it all themselves? I sure don’t. More people, though, are rejecting the Gordon Gekkos and turning to sites managed by home-based traders, sites that believe in exposing the inner workings of trading transactions.

The Times article profiles a couple of guys who work for Today Trader (todaytrader.com), a two-year old internet venture that puts a premium on transparency. “Here is your chance to look over the ‘virtual shoulder’ of experienced traders executing LIVE stock trades,” says the website.” Watch and listen in REAL TIME using desktop sharing software and Internet audio as we execute trades throughout the day. A new way to learn how to Day Trade and Swing Trade.” It’s the latter-day equivalent of tuning in your transistor radio to listen to truck drivers bantering back and forth on their CB’s.

While this new breed of trader isn’t taking over from the mega institutions, like Charles Schwab, they are evidence of a shift in our culture, one brought about by the intersection of a falling economy and an ascending digital culture.

The partners at Today Trader, Steve Gomez and Andy Linloff (pictured above with his daughter jumping on the bed behind him), spend much of their day fielding questions posted in their chat room. Their Zen responses should convince you that change is afoot.

Segal describes one subscriber, Rick, who asks Gomez, “What do you guys do to stop kicking yourself (emotionally) about missed opportunity?” Mr. Gomez leans into his keyboard and taps out a response. “Not looking back, not kicking yourself for not catching the whole move. You’re never going to be perfect. Nobody is going to be perfect. … Our down days are every bit as instructive as our ups.”

Trends come and go. Let’s see if this one sticks.