This one and only life 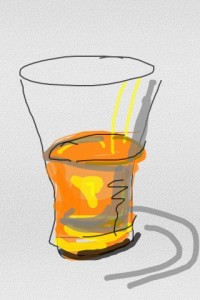 Beer turns lots of people into citizen philosophers, including me.

I was nursing a Guinness the other day with my friend, Ajeet, when, apropos of nothing, he sighed and announced, “Well, I’ve fulfilled my biological destiny. I’ve fathered a boy and a girl.” He didn’t elaborate, although I gave him the space to. All I remember is, the “dot, dot, dot” at the end of his statement sounded like it was turned all the way up to eleven.

Paleolithic Man was driven by the instinct to replicate himself (when he wasn’t outsmarting death). What choice did he have when saber-toothed tigers were crouching around every corner and the weather constantly threatened to wipe out his food options? Today’s comforts and conveniences, however, have relieved us of much of the physical struggle to survive, at least in the West. With snacks and beverages a given, we’ve turned our questing spirit over to identifying the purpose of life beyond survival (meaning: we stare into space and hoppy drinks a lot more and stay up all night having life-dissecting conversations).

To illustrate this — and this is totally unscientific — look at the number of breathless shout outs in the Twitter stream coming from travelers determined to share their sightings of the sun burning its way through the morning mist in India, or sinking behind the horizon in Africa. All, in my mind, confirm our need to reach for something indefinably greater. In my own romantic/existential hazes, I’ve felt an inexplicable urgency to draw and share the colours of the sky over Toronto created with a swirl of my finger across my iPhone screen. I’d say this makes me part of the growing contingent of smart phone owners who are using technology to bridge time and space and join forces with the universe.

Writer and poet, Edith Cobb, put it best when she said, “The need to extend the self in time and space — the need to create in order to live, to breathe, and to be — precedes, indeed, of necessity exceeds, the need for self-reproduction as a personal survival function.” And while this is not a quote fest, let me point out something else the singer/songwriter Judy Collins said to her friend, Gloria Steinem, when GS was weathering a case of the mean reds. Both knew that art was not some rarefied pursuit. “We have five senses because we’re supposed to use them,” explained Collins. “I think we each come out of the womb with some unique way of looking at the world, and if we don’t express it, we lose faith in ourselves.”

My main man Jeremy Rifkin, author of The Empathic Civilization, has something to say about this too. Rifkin sees a new role for the internet as a platform for collectively boosting our faith in ourselves and each other, and he reinforced this in January at a talk he delivered to the employees at Google, captured on YouTube.

Rifkin believes the net has this rare ability to “connect the central nervous system of the human race.” It’s like nothing we’ve ever seen before and it’s changing our consciousness, he says. He wants to see Google getting actively involved in extending our capacity for empathy and social change (especially in the raising of our biosphere consciousness).

I know what he means about connecting the central nervous system. Writing a letter doesn’t feel anything like the prickly rush I sometimes get after I lob my heartfelt ideas and sketches into cyberspace. And while speed is a part of it, it’s really about breadth. Letters are a contained experience (as they should be in certain cases). The net isn’t. There’s something about taking chances with more than one person that we’ve never experienced before, at least at this scale. As Rifkin explains it, the internet is feeding into our innate need to broaden and deepen our relationships and participate in “more expansive communities of meaning.”

The possibilities of the internet to spread empathy also raises new and more hopeful possibilities for re-imagining human nature. The Greed is Good characterization of human nature — born in the eighteenth century and alive today in our constant re-casting of Michael Douglas in his Gordon Gekko role from the movie, Wall Street — is still gospel, as Rifkin points out, but it’s no longer sacrosanct. The record amount of money raised for Haiti through Twitter made us rethink ourselves and our potential.

Indeed, Michael Douglas’s own personal relationships, especially the one with his son, have made him do a big re-think about his choices and his nature. His life shows how one father’s self-serving behaviour made the people closest to him lose faith in themselves. I get exactly the opposite feeling from Jeff Bridges’ relationship with his dad, Lloyd (wasn’t that a great Oscar tribute!). The Bridges family was (and is)  all about expressing and extending the best we have to offer.

I feel that way too about my friend Ajeet and his kids. So much for “dot, dot, dot.”

*Ajeet is not my friend’s real name.

4 responses to “This one and only life”