If beer is a food group in Germany (and Ireland and England and Canada), it’s sipped in Holland like a rationed commodity. The Dutch like to serve their suds in small champagne flutes, which doesn’t exactly inspire glug fests. Instead, they binge on Pringles. Maybe they like the uniform design of the chip? (the way it snaps in two against the roof of your mouth) Maybe it’s the can? I dunno. Regardless, the sound of hissing and popping containers is as common as the groan of tour boats reversing mid-canal.

Because beer isn’t top of the food chain, the Dutch aren’t big bar hoppers. Instead, they socialize in “coffee shops” where the hookah pipes are on full bubble and the joints move around the circle three, four five times (alcohol is prohibited in these so-called “coffee” shops.) For a coffee sans herbs, go to a café.

On sunny summer afternoons twenty somethings give the coffee shops a rest and gather on the canals. Friends text each other to meet up on someone’s boat (most Amsterdammers own a boat and a car). They arrange the Pringles on plates and set down wine bottles or Heineken six packs in the centre of the boat, throw down some pillows and cruise the canals for hours, talking, laughing and turning their faces to the sun. It rains quite a bit here, so sunny days are coveted like gold. Silky blondes turn even blonder on these days. 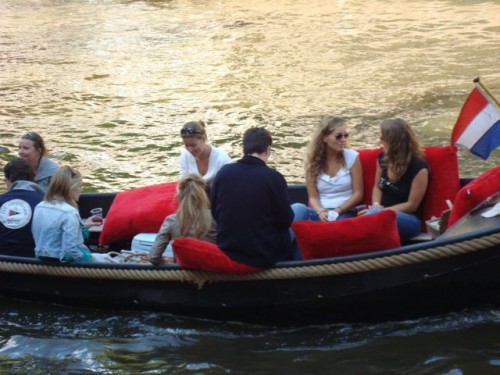 You can’t see the Pringles pile-up in the photo above. I should have taken the picture looking down from a bridge. But I wasn’t thinking fast enough and they sailed past. Same with the next Pringle party that went by. My timing was so off yesterday. 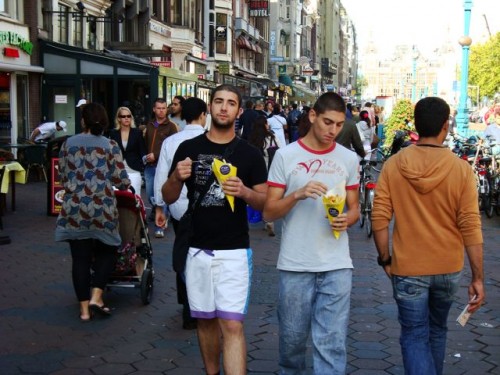 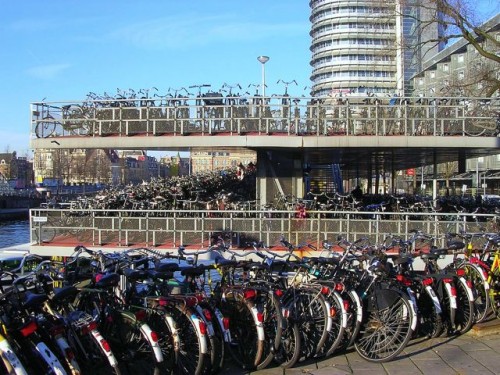 Coming from Toronto, which is as anti-bike as it gets, I had to laugh at the extent to which Amsterdammers embrace their wheels. This parking garage houses 2500 bikes and is packed to the gills every day. 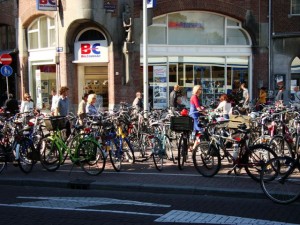 The streets are rammed with bikes too. Here cars and pedestrians yield to the soft ring of oncoming bikes. No one seems to crash into, door, yell at or sue bikers. 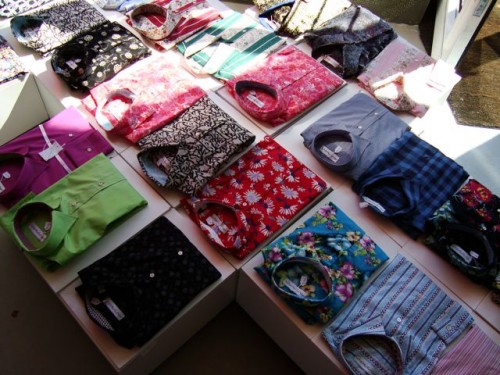 I also noticed that the Dutch like to indulge in kookier colours than Canadians. 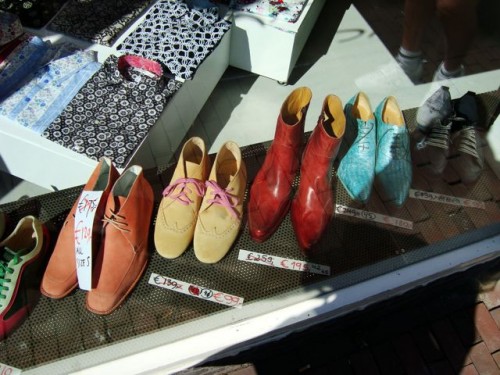 I’ve decided the Dutch either look like museum directors, with their funky clothes and interesting eye wear, or like direct descendants of Rembrandt. It’s the wild hairstyles, puzzling expressions and dirty fingernails. Maybe all those herbal lunches have made them apathetic about their grooming? Many of them, especially the men, look as earthy as the merchants hanging on the walls of the Rijksmuseum. 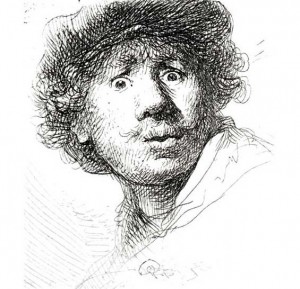 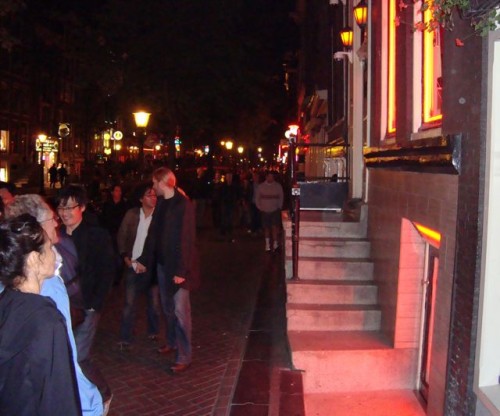 And now, to the Red Light District. What I want to know is who actually shops there? Not the locals, or so they say. Is it backpacking geeks or sk8er boys keen to jump-start their sex lives? C-list drug dealers? Priests? Husbands of wives in their eighth month? (That’s cynical, I know. But it happens). And this may be Holland, but blond milkmaids aren’t for sale in Amsterdam, as far as I can tell. At least they weren’t the night I roamed the district. The prostitutes looked mostly Eastern European … and bored. They didn’t use their windows to sell themselves like I’m told working girls did back in the sixties when Jane Fonda, Sophia Loren and the art of the striptease were their inspiration. Today the girls sit in their windows and smoke with their feet up. Some slap on body lotion (Vaseline Intensive Care) — artlessly — or sip from Starbucks cups. Others drum their acrylic nails on the window when men pass, staring periodically at their wrist watches. That’s the extent of their efforts. There are no come hither curls of the index finger. No garter belts inching down the leg. Just florescent string bikinis criss-crossing under muffin tops and around scrupulously waxed skin. When I walked past the windows, I could feel my expressions alternating between a cocked eyebrow and a, “Hey, how ya doin’?” smile. They smiled back. I felt like a Labrador trapped in a zoo of snakes and tigers.