We all have our coping mechanisms for getting through life, habits we pick up as youngsters or fall into as adults. Some are private and gross (toe nail biting) or public and determined (nose picking). A few enlighten and engage the human spirit (reading), while others are mechanical and redundant (hand washing), or lonely (midnight bingeing). Some are welcome (tidying up) until they turn extreme (obsessive label-making). And one, in particular, is just plain annoying (whistling). 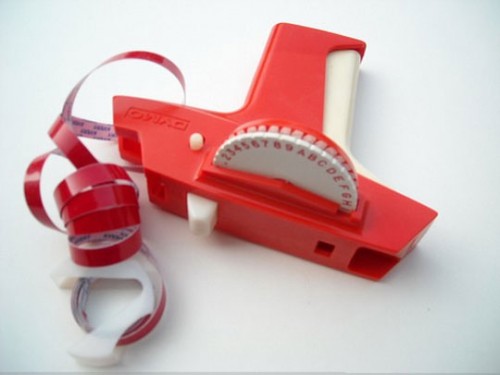 But none of these habits are hurting anyone else. They may raise an eyebrow (the toes), then furrow them (the whistling) or be a good reason for deep concern (doesn’t bingeing stem from things left unsaid?), but they don’t physically alter someone else’s cell division or longevity.

To do that you would have to get hooked on what one third of the world is doing every day, every hour and minute for any number of reasons: to calm their nerves, escape boredom, fill in uncomfortable pauses in conversations or melt extra fat.

You’d have to strike a match and start smoking. 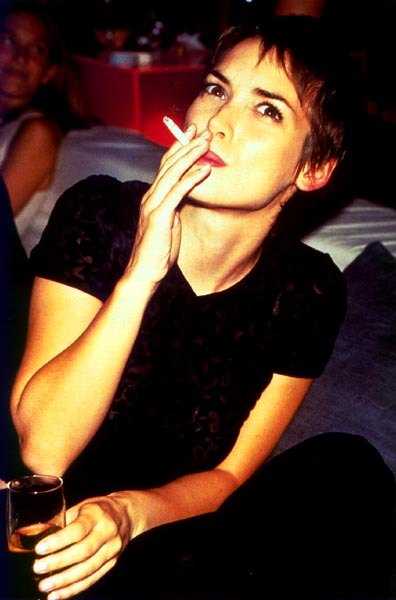 I’m Winona Ryder and try as you might, you’re not.

I write for a living, but I work at a bar at night to help pay my bills. I do it because it’s fun and because publishers mostly don’t listen (or ever call me again) when I say, “Hey, you should pay me for those extra rights you just took away.” Working in a bookstore would be fun too (and more me), but I need my days to write. And I need the tips. What I don’t need is the smoke.

When smoking was banned inside Toronto bars and restos five years ago, the problem didn’t go away. It just moved. And I moved with it.

In the summer when I manage the patio I’m constantly dashing around trying to avoid the exhales of smokers. Sometimes I’ll place feeble little notes on the backs of business cards — “Please don’t smoke here. Move to the end of the patio. Thanks!” It’s silly, I know. They’re not breaking the law. Anyway, most of them turn my pleas into coasters when they drop their pints to light up. I have to turn up the wattage in my smile when I ask smokers standing at my work station to take it elsewhere. The withering looks I get say it all: Aren’t we uptight? Or my favourite: “Then don’t work here.” Others direct my attention to the cars zooming past us on the street. “Those cause more pollution, you know.”

Well, I don’t drive, but I do smoke thanks to them.

Rather than wallowing in my utter powerlessness or pulling cigarettes from the lips from every smoker who gets in my air — like Karsh did with Churchill’s cigar right before he captured history — I decided to get on the phone and look for scientists to fill my corner. Here’s an article I wrote about the health hazards of sitting beside smokers on patios that quotes a couple of those scientists. Patios became a hotspot for smokers after they were kicked outside. Building entrances became another. All this exposure to outdoor secondhand smoke can’t be good for me.

“It’s not,” says Pam Kaufman. I found Pam at the University of Toronto in the offices of the Ontario Tobacco Research Unit. She just published ground-breaking research on people’s outdoor smoking habits. She and her team strapped on air monitoring backpacks and spent two months testing the air quality at building entranceways in downtown Toronto (28 buildings to be exact).

In a nutshell, Pam found that when smokers hover at entranceways to office buildings and hospitals the people going in and out of those building end up breathing in 2.5 to 3 times more toxins than they would if smokers weren’t around, and smog from cars and industry was the only thing to worry about. 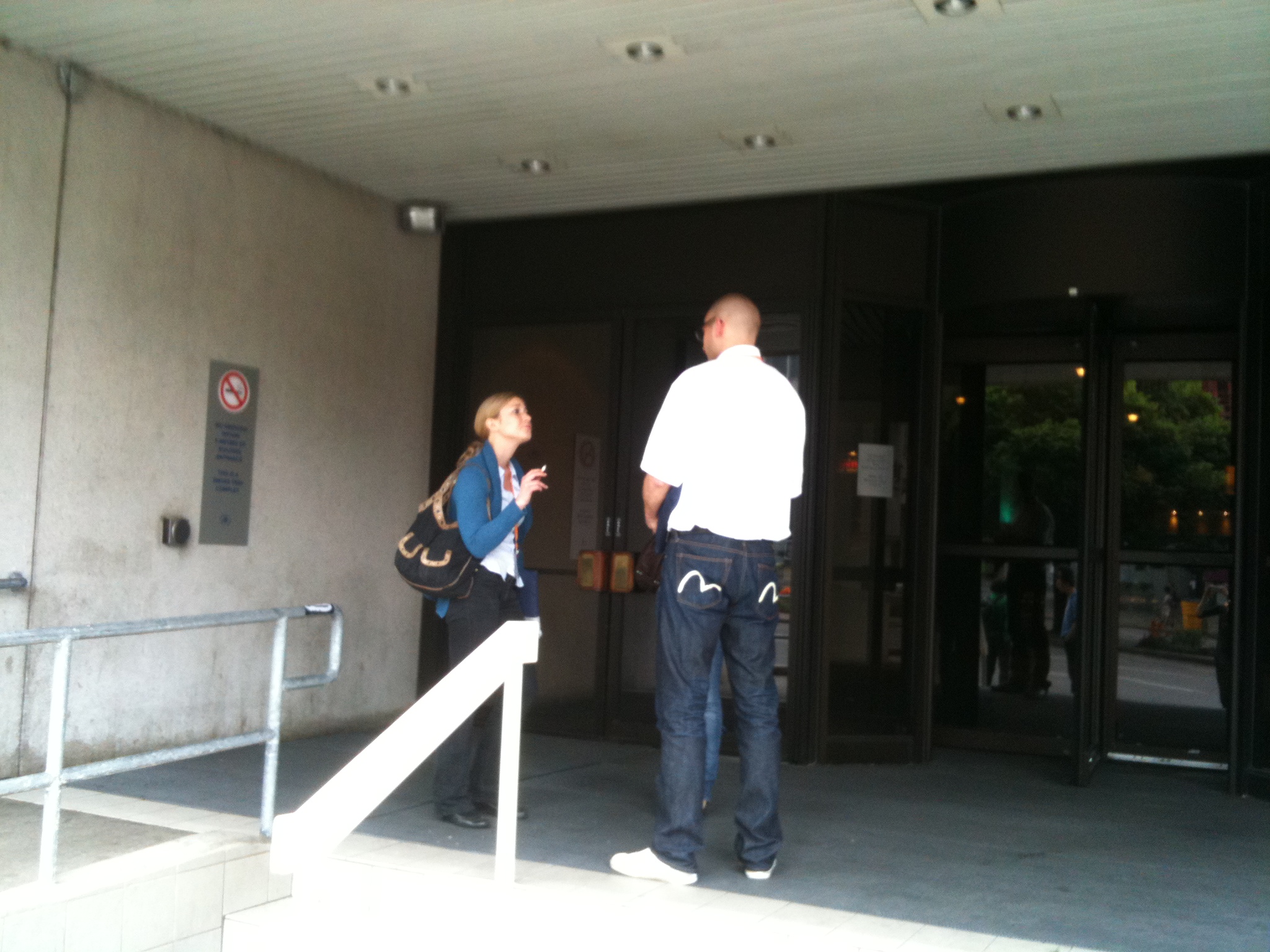 Signs across the city, like this one at the Hilton Hotel, ask smokers to move 9 metres (30 feet) from entranceways. But that’s just moving the problem a-gain. The question is: where can we put smokers so they don’t affect the rest of us?

What in the blazes is going on with my fonts? My HTML commands are not sticking. I’m emphatic about this subject, dear readers, but not THIS emphatic. Sheesh.

“Hard data has been the missing link in outdoor secondhand smoke research,” she told me, in one of our many long phone chats. Putting this into perspective, Pam explained that secondhand smoke at peak smoke break times can and frequently does cross into the “hazardous” zone established by the Environmental Protection Agency’s Air Quality Index. “It’s not just a few wisps,” she says. Still, it’s tricky. “No one has studied the cumulative effect of these transient bursts of secondhand smoke, but all the evidence suggests that no level of secondhand smoke is safe.”

Click here if you want to read my latest story at OpenFile.ca. 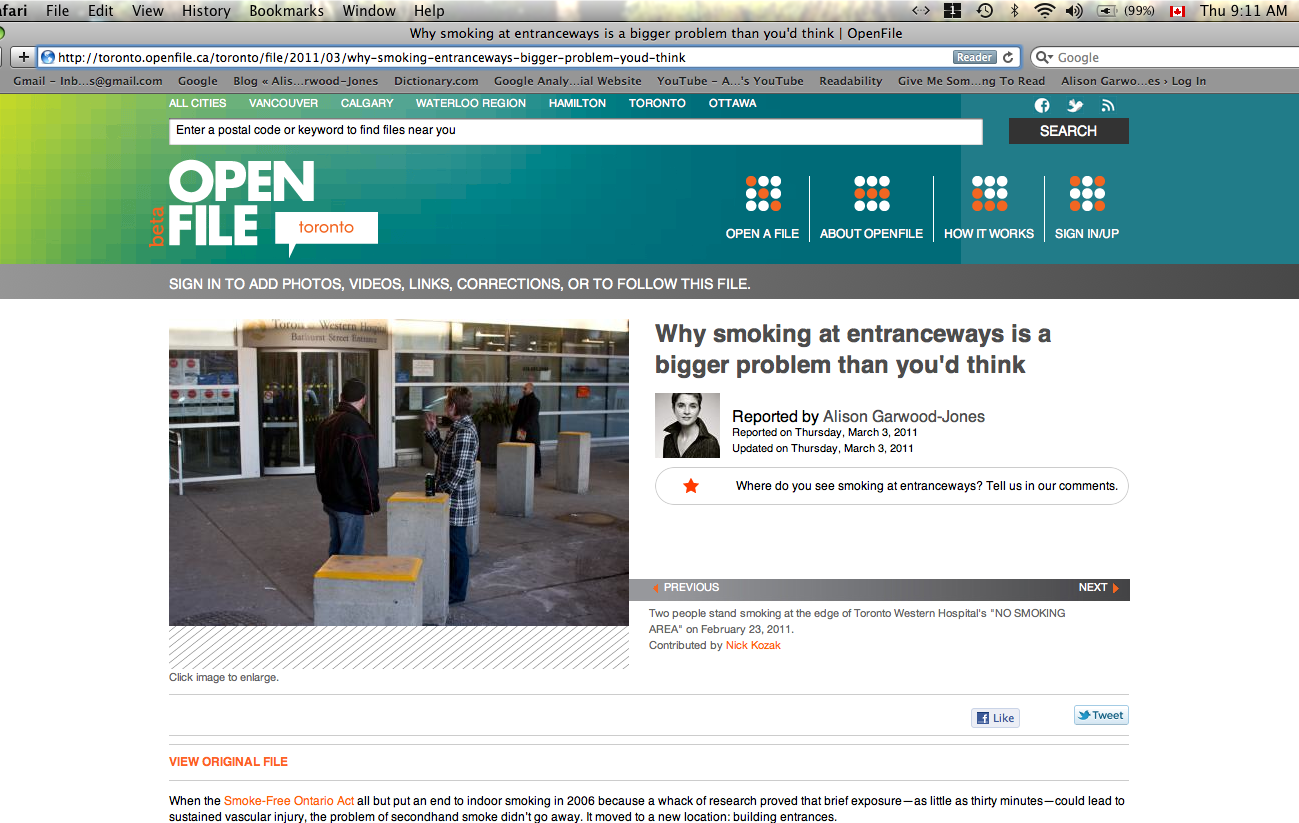 Working at a bar also gives me a front row seat to another addiction that harms more than the person doing it. Of course, I’m talking about alcohol. 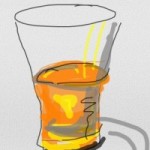 I see the same grown men (and some women) sway past me on every shift. As the night wears on and the dinner crowd thins out, I watch them sitting at the bar, saying yes with their eyes to another drink as the bartender looks their way. I think about them and I think about myself too and how I’m handling my life. I don’t really understand what triggers each of us to unfold in such different patterns. Experiences? Chromosomes? Broken hearts?

There are lots of theories about addiction. David Carr, a former addict, thinks his drinking and drugging was an attempt to simplify his life:

While other people worry about their 401(k)’s, getting their kids into the right nursery school and/or college, and keeping their plot to take over the world in good effect, a junkie or a drunk just has to worry about his next dose. It leads to a life that is, in a way, remarkably organized. What are we doing today? Exactly what we did yesterday. And a drunk or junkie [can always find] fellow travelers.

(From Carr’s book, The Night of the Gun. Scroll up on the right, it’s featured in my “Books I Love” section)

Kelsey Grammar thinks his addictions to alcohol, drugs and marriage stem from unresolved grief (both his sister and his father were murdered). Deepak Chopra says addiction starts as a search for something more. “It’s a search for joy, a search for [some kind of] exaltation and somehow it goes the wrong way,” he told a gathering last week in Squamish, B.C. “In my experience,” he said, “people who have problems with addiction are really the most spiritual people of all.”

I’m counting on that to see them through.