Because I find writing about my dad more fun than crying. 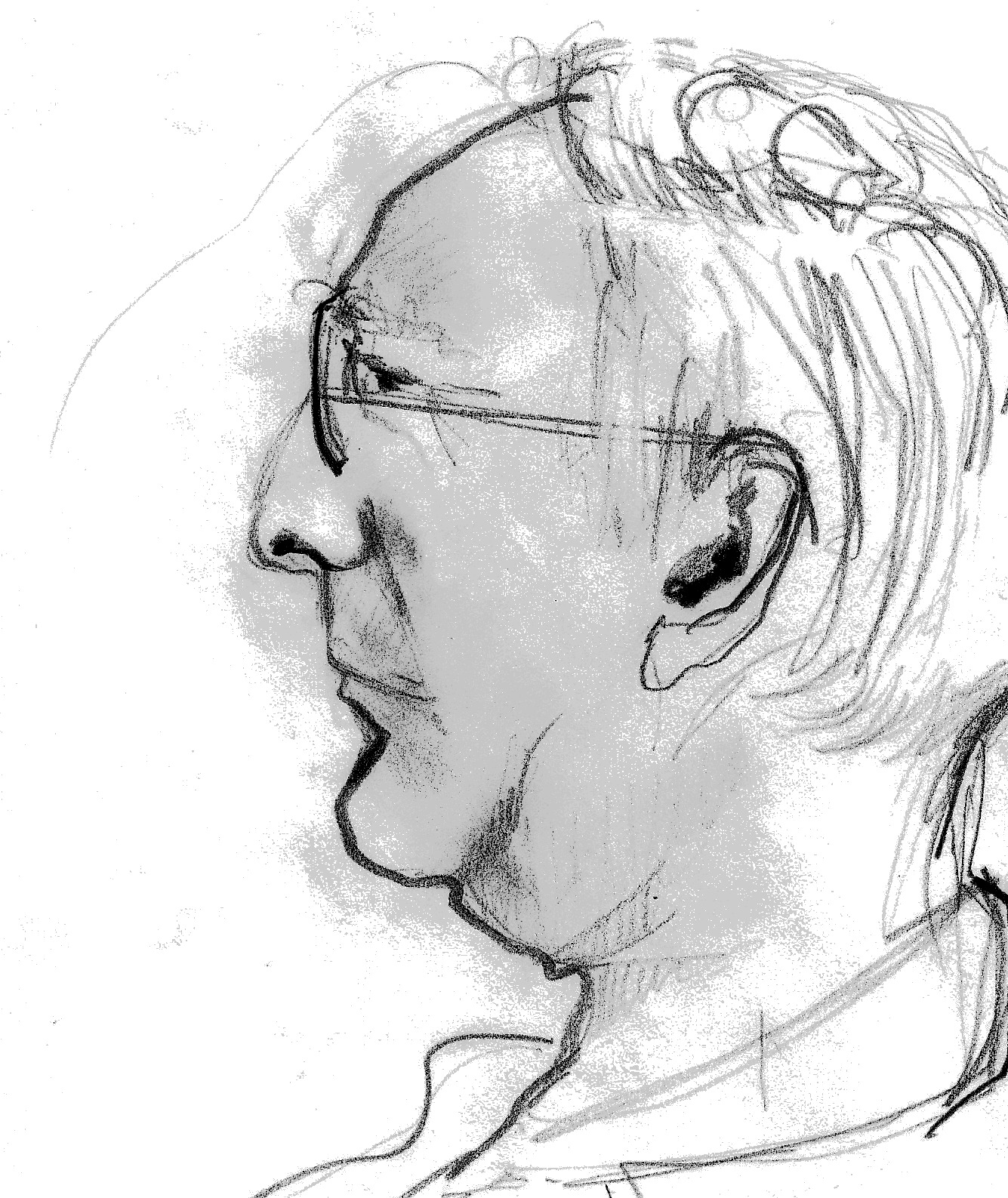 My dad was still hanging in the air inside his home a few hours after he died (it’s now been 12 weeks).

I took note of his presence before the march of relatives and time swept away the details.

In keeping with his British roots, he had a soft-boiled egg for breakfast. I found a fragment of brown shell on the kitchen table put there by the first tap of his spoon, then saw the egg cup filled with water sitting in the sink next to a gummy teaspoon.

But the egg was just a starter. His main course was always a giant bowl of gravelly cereal topped with fresh blueberries, strawberries and flax seeds (because a pretty health nut once told him “They’re good for you!”) “Actually, Dad, the oil is better. Your body won’t break down the seeds.”

He still kept pouring them over everything.

His bowl was in the sink next to the egg cup and, now, two spoons. Nearby, a dirty juice glass filled with water had developed a thin skin of floating pulp specimens. Dad used to drink a morning tea that my mum brought to his bedside for most of their 50-plus years of married life. But after he lost her he switched to juice. There was no mug in the sink.

It was a cool and sunny Saturday in March, his very last day, and two months before the official start of golf season. Dad was looking forward to opening day at the golf club, to unzipping his duffel bag and switching his tennis shoes for his two-toned golf shoes. But the fairways were still off limits, too soft from the melting snow and too prone to tears to unleash the cleated foursomes. So he spent that morning at the kitchen table reading The Guardian from cover to cover. Then Maclean’s.

Dad had recently become a fan of the new-and-improved Maclean’s, buying a subscription after Time (Canada) folded. ”I can’t keep up with all of this,” he used to say when my brothers and I visited. He relished the effect of news on paper. Despite having an iPhone and all the news and sports apps I guy could want, he still believed nothing beat paper. “With this layout, you read stories you never knew you wanted to read,” he said. The magazines were spread out all over the kitchen table, just as he’d left them, by the time we got to his place. His iPhone — a gift from my brother, Pete — was plugged into the wall, recharging.

You don’t have to have been with him that morning to know that Penny, Dad’s black lab, spent breakfast as a dead weight draped across his slippered feet. Years earlier he had stopped feeding her under the table. She got fat. For a while, Dad solved Penny’s expanding BMI by letting her run off leash all over the property. But she kept running away past the driveway, beyond the apple trees and across a four-lane highway to a nearby Tim Horton’s. The first time Penny skidded to halt at the rear of the donut shop, staff on their smoke breaks started feeding her Timbits and serving her water in large coffee cups. And just like that, she was one of the gang, a regular out back by the dumpster.

My brothers were quick to put a stop this. On one level, Dad was relieved. He didn’t want Penny to be a smear on the highway, nor did he want to have get in the car and collect her every time he let her out. On another level, something about their veto bugged him. “All dogs should be free. Men too,” he chafed one time when he was attaching Penny to a long lead the boys had placed next to his walking shoes. I was standing at the door waiting for him when he said that. Dad hated being told what to do, especially by the people he loved. Still, off they went down the driveway every morning, a man and his dog connected by a retractable cord, each of them, for the most part, staying in line.

The country road Dad and Penny walked along had been adjacent to a cornfield back in the seventies when we were kids. Every spring you could smell the manure going down. It made us all squeal, “Peeeee U!” We loved to over dramatize our disgust by twisting our faces in different directions. Come fall, we were running between rows of corn stalks that towered over us by more than a foot. From afar, you could see we were in there by the jostle in the crop. It was like the ripple behind a boat.

Sitting down on the soil between the rows was better than being in a treehouse, more private and quiet. The sour smell of the green husks filled our noses, replacing the manure later in the season. We’d tear open multiple cobs, like Christmas crackers, and part the silky blonde hair to see what they revealed. No two were alike. Tight, perfect rows of niblets in shades of blood red and golden yellow lured small fingers down their length. Children of the corn we were, only less scary. 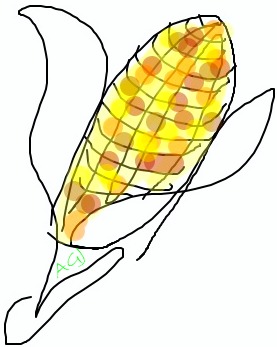 “It’s Indian corn,” Dad explained back home when we presented our parents with a bouquet of husks. “It’s for cows, not kids.” We wanted to eat them with our hamburger patties. Instead, we settled for the Green Giant’s creamed corn. We used to play in junior tennis tournaments with the boy who did the voice for the Little Green Sprout. We asked mum to stock up on the stuff, thinking our friend had approved the contents of each can.

Today the corn field is long gone. And so is the farmer on the red tractor we never did meet. For years, we waved to him from the road as he came to the end of one row and turned around to plough his way up the next. Now when Dad and Penny made their way down the road and turned to look at where the cornfield used to be, instead they saw people getting out of their cars and marching into the neighbouring Wal-Mart. It was one of five big box stores that had popped up beside his property in a few short years. When Penny wasn’t at Tim Horton’s, she was in that giant parking lot inhaling every scent coming off the pavement.

After Dad died Penny retreated to the corner of the family room. My brother, Richard, was the first to notice she had stopped sitting at the front window at the end of the day waiting for Dad to come home from work. Moving through the family room, I bent down to stroke Penny and took note of Dad’s last movements in this room: the bookmark on page 174 of Lawrence Hill’s Book of Negroes laying beside his Lazy-Boy recliner, the advance of chess pieces in a game he was playing by himself, the half eaten box of chocolates in a drawer across the room (I ate one … strawberry cream), and, on his side table, a tiny tin of aspirin he popped open every time he felt an unfamiliar flutter in his chest. Moving over to his home office, I lifted the lid on his leather briefcase and took out his Tic Tacs and gave them a shake. The latest issue of Maclean’s was sitting on top of a bunch of files of design projects on the go.

Dad went to bed that night with a belly full of chicken curry and rice (that he cooked himself) and a warm dog by his side.

A few hours later he was gone.

Afterword: The final episode of the series “Six Feet Under” had a huge effect on me when I saw it several years ago. For those of you who haven’t see it, rent it. It fast forwards to the moment of death for each of the main characters, and it does so in a way that is so extraordinary in its ordinariness. Nothing is overdramatized and there are no heroics. Everyone simply expires. It’s like witnessing the timer go off on a cake that has risen as high as it can go before the elements that sustained it and made it grow, suddenly switch over and capsize it.