Whenever anyone coos about the “Golden Age of Journalism” this is what they’re talking about: 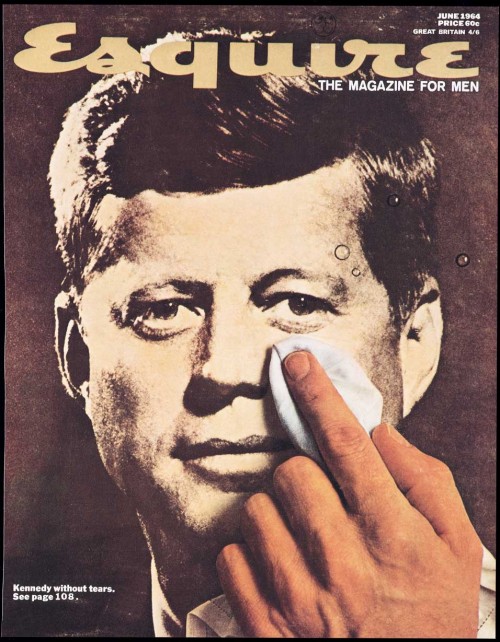 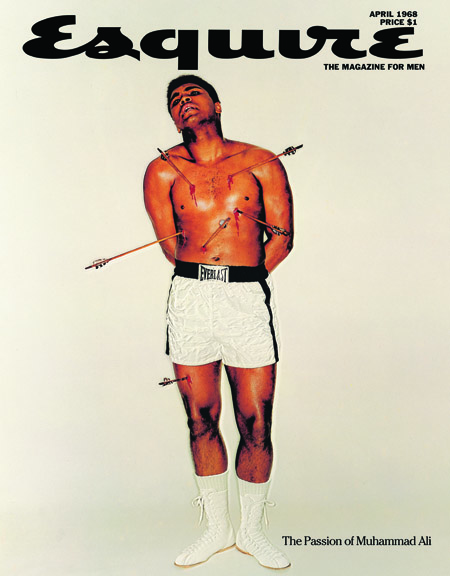 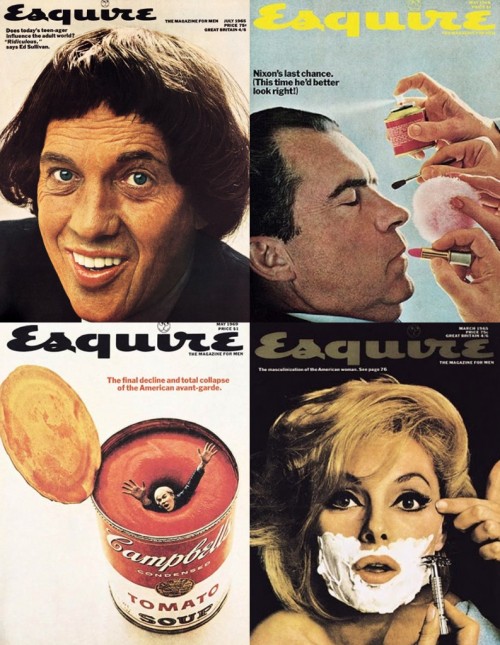 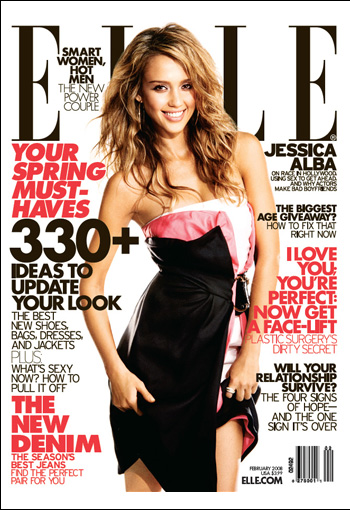 And and I worked for Elle, God love’em. But if you had to choose between 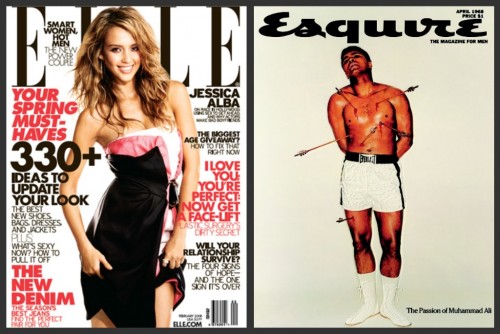 Which one stays with you? Haunts you? Plays on your imagination like a painting or a good book? It’s the Esquire covers by legendary art director, George Lois. Read about the time I met George here.

Maybe you’re thinking, yeah, but those subjects are too different: one shows Jessica Alba at the height of her acting and posing career while the other shows Muhammad Ali at the height of his fighting career, albeit banned from the boxing ring for refusing the call to military service (hence the martyr angle). If they feel too different, then try this: 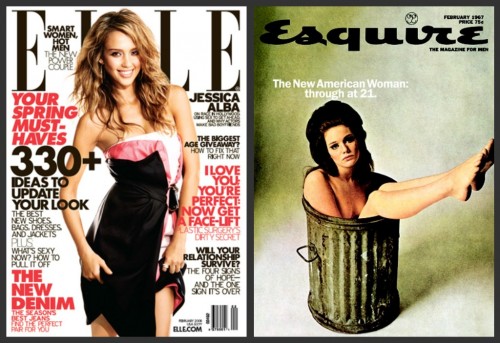 Now you’re looking at Jessica Alba at the height of her posing career and some non-celebrity from the sixties tossed out of the game for being over 21.

The point being, you remember the cover that says the most with the least. “It’s like they’re trying to recreate the internet on the page,” George told me, pointing to all the verbal diarrhea on most covers (although I’m the one who chose the Elle cover). I called George at his Greenwich Village apartment last month and he was energetic, wildly profane and as opinionated as ever. “Every square inch of the page has information on it,” he continued. “That’s not the way to design a magazine. I’d take one-quarter of that information and do a graphic punch.”

I especially like magazine covers that tell us something fundamental about ourselves, like George’s commentary on ageism in America with the cover of the young woman in the trash can. He said he knew he would get flak for that idea and he did. Back then, anything grimmer than cheesecake was considered insulting to women. Forty years later, despite the march of time the Elle cover doesn’t question ageism it supports it with a chorus of  blinking cover lines about “plastic surgery’s dirty little secrets,” the “biggest age giveaways,” using sex to get ahead, and the best new shoes, bags, dresses and jackets. It’s scattered and exhausting and what’s worse, alarmism in aspirational clothing. 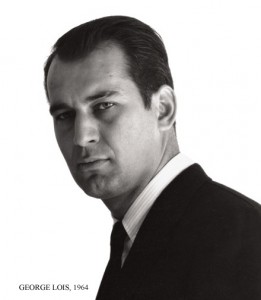 George is coming to Toronto next month to talk at the RGD (Registered Graphic Designers) Conference. He told me he’s on a mission. “I’m coming to Toronto because I wanna drill into everybody what great ideas are all about.” At 81 he’s still crossing the continent trying to get us thinking about the elements that go into effective design and meaningful cultural commentary. And it all starts with one sharp idea at a time. Here are just a few of his.

In 1965, before anyone had heard of Betty Friedan, Gloria (Glo Glo) Steinem, Germaine Greer or Women’s Lib, Lois reflected on the changes going on in women by doing a cover of a Marilyn Monroe lookalike shaving. “As a great designer, you should anticipate the culture. You should know what is coming. I knew the women’s movement was coming before women knew it. You knew it, you felt it in ‘em. All the women around me were getting stronger and tougher and weren’t taking any shit from anybody. The women were getting balls. I got it. I was working with women who did stuff, a TV producer who was incredible. She kicked ass. She wouldn’t take shit from me. She was delicious! So what do I do? I do a cover of a beautiful woman shaving. It knocks you on your ass. The wit’s there. The way she’s looking at you she’s saying, After I finish shaving, I’m gonna kick your ass. That communicates in a nanosecond. You get, you think about it and you remember it.”

Then there was the time George stood at the front door of CBS’s Studio-50 at Broadway and West 53rd and convinced that really big showman, Ed Sullivan, to come by his studio and pose in a Beatles wig. This was the week when America was just learning about the Fab Four. “When Sullivan finally came out I shoved a sketch of my proposed cover in his face and talked fast,” writes Lois on his website.” He took a long look and grinned ear to ear, just like the final shot we took the next day. He wore his wig with gusto and smiled like Ringo.”

Five years ago editor Tina Brown (formerly of the New Yorker, Vanity Fair and now Newsweek) sidled to George at a party and said, “God George, your Esquire covers were genius but you can’t do those kind of covers any more.” “Why the hell not?” he asked. “Because ideas don’t sell anymore,” said Brown. “Waddya tawking about?” bellowed Lois in his fighting Bronx brogue. “C’mon, ideas are what make the world go round.” Brown went on about how newsstands are crowded with more titles, but Lois would have none of it. “You go to the newsstand now and there’s what, 150 covers? And my covers still leap out and grab you by the balls. It’s so obvious,” he said. Lois believes there are a ton of good graphic designers and ad men and women working today, but they’re working in a climate that rejects provocative commentary and the very notion of selling. When it comes to magazine covers the strongest show one idea, “like a beam of light,” Lois explains, pointing to his best covers of Muhammad Ali as Saint Sebastian and Andy Warhol drowning in his own can of soup. “Now, there’s a cacophony of cover lines and every square inch of the page has information on it, like a web page. Go for the graphic punch.”

Advertising also lacks conviction, says Lois, also legendary for his ad campaigns. Take car ads. “There’s no real winner or no real selling going on. Was that a Honda or a Mazda?” Lois believes the anti-sell is being taught in schools. “Don’t let them know you’re advertising. Don’t really mention the sale, just entertain. And I’m like, Are you kidding me? I entertain with wit, a sharp idea and a dramatic punch in the mouth. My commercials communicate in a nanosecond. You know I’m selling and you enjoy the hell out of being sold.”

George uses computers, he likes computers, BUT …  “I visit a lot of design schools and the students tell me about the projects they’re working on, but when I ask, ‘What ‘s the idea?’ they always say, ‘I dunno yet.’ ‘Then what are you doing at your computer?’ And they say, ‘Playing.’ ‘Well, then you’re playing with yourself; you’re just masturbating.’” It’s a problem when designers start designing before they have an idea, explains Lois. “You won’t get your ideas staring at a computer screen. You’ll get them by engaging with your surroundings, going to museums, studying art history, keeping up on the news.”

“This whole thing with the Twittering and the networking and the narcissism that goes on. The time spent keeping up with your friends is beyond belief. Then on top of that, you can get all the information you want online and it’s pretty correct, except for Wikipedia, but when you talk to young people they don’t know anything. When they learn something, they forget it because they know it’s there. They don’t try and retain it. When you talk to them about the history of art and the history of culture, of movies made in the 1930s and 1940s, the ballet, about anything, they look at you and say, Well, I wasn’t alive then. Then I say, ‘Well, I notice you’re wearing a crucifix. Jesus Christ died a long time ago but you know about him …’ They’re supposed to understand culture. If you don’t understand the culture you can’t do great work. You could even bring up Muhammad Ali today and they don’t know what I’m talking about. I’ve been to the Met 5000 times. Every time I go I have an epiphany over something I didn’t quit notice before. It’s all the Shock of the Old. If you don’t know the history of art and design you’re unarmed. It’s a sad future when your young people don’t know shit.”

“I gave a talk a few years ago to magazine editors at a conference. They wanted me to do a talk on magazines covers and ripped their eyeballs out. They were looking at the covers I did 45 years ago and going WOW! About every 15 minutes I would berate everyone in the room. I would say to them, every magazine in this — and there were about 800 editors from hundreds of magazines — except maybe Vanity Fair and the New Yorker were complicit in the Iraq War. You all sat there and ate that bullshit up with a spoon. And anyone with half a brain knew that Bush was making things up and Cheney too. And I stunned them. Fifteen minutes later I said it in a different way and there was some applause. About half and hour later I said it again, standing ovation and they were saying, Yeah! We were complicit in the war. It was amazing. The point is: if you’re a designer you have to be a humanitarian. You have to speak truth to power. If there’s shit going on, you should figure out how in your job you can fight the bad guys”

“Magazines should not be designed for the reader. Great editors and great art directors should be designing a magazine for themselves. What kind of magazine would I love to read? What should be in it? What would it look like? You shouldn’t be saying, what does the public want? Let’s go out and do some research to find out what they want. What do they know what they want? I don’t believe in group gropes” All of this reminds me of Steve Jobs who, when asked how much market research he did when developing the iPad, responded, “None. It isn’t the consumers’ job to know what they want.”

George inspired Matt Weiner to create the TV show Mad Men. But that doesn’t sit too well with him. “Right before the show premiered, everyone in town was saying to me, Hey there’s a show called Mad Men coming to TV and we think it’s about you! People called me up and said are you doing that show? I said, No. I don’t know what it is. They were promoting it as a show about advertising in the sixties. Instead, it’s a typical talentless, schlocky agency where the ad executives are schtupping their secretaries and smoking themselves to death. We didn’t’ spend the day sitting around. We were thinking, doing comps, running out to film shoots, going to commercials, doing my story boards all night. Who had time to get laid?”