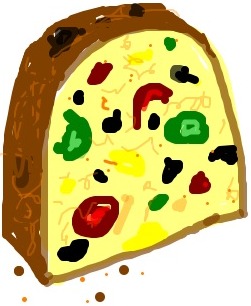 The meaning of “fruitcake” has run the gamut of mostly derogatory definitions:

a) A limp-wristed man

b) A stupid boss (usually referring to a female boss)

c) A brick of cocaine

d) A guy with a penchant for snug, and I mean really snug pants (see “a”)

e) A sexual act I’d rather not describe

f) Someone who’s one sandwich short of a picnic

h) And back in the day, a Johnny Carson punch line

And my favourite definition: a cake packed with candied fruit, toasted nuts, spices and rum that tastes epic with a steaming cup of tea.

Be nice, people. And eat up!