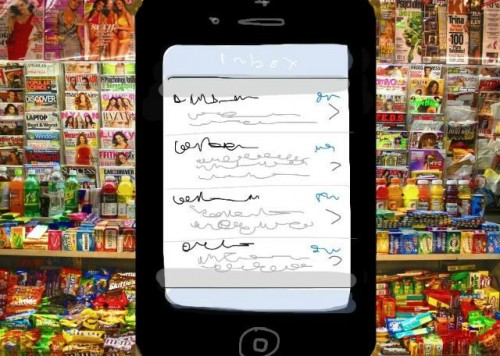 Photo by Jordan Taler with Brushes drawing by Alison Garwood-Jones

Newsstand sales of magazines and gum are both down. There’s a connection

David Carey, president of Hearst Magazines, is calling it “the mobile blinder effect.” Talking to the Financial Times, he said that people waiting in line at the grocery store and the newsstand are staring at their phone screens during this key impulse purchasing window, rather than looking at the magazine racks and candy spreads. The latest reports show gum sales in the US are down by 2.7 percent (or $3.5 billion) while sales of consumer magazines dropped almost 10 percent (8.2%) in the second half of 2012.

Adding more screaming headlines to the newsstand and more flavours of gum, like Eclipse Polar Ice and Extra Dessert Delights, are not bringing readers or chewers back. In the case of the gum, the dizzying explosion of flavours over the past few years actually cannibalized sales rather than attracting new consumers. “We’ve made shopping for gum very complicated,” Casey Keller, president of the North America division of Wm. Wrigley Jr. Co. told The Wall Street Journal. “We have 50 different varieties of gum in a convenience store, and that’s just Wrigley.” 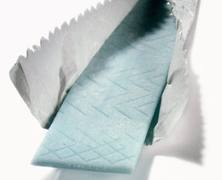 Gum makers, including Wrigley’s, are considering a return to the classic flavours (remember mint?) and re-marketing gum as a “concentration aid” — something that will help video game addicts, students studying for exams and other high-strung types focus on the task at hand. They also want to make the packs small enough (6 pieces per) to fit into a smart phone pocket and cheaper than the cost of downloading an iTune (i.e. less than $1). Last year, the average price of a pack of gum in the US shot up to $1.58, whereas the average download was .99¢.

Magazines are also playing with pricing, offering cheap digital downloads. Whether they can make the consumer stop and stare, or care, is the current challenge. My pal Kat Tancock put it  best. Commenting on this story on D.B. Scott’s Canadian Magazines blog, she said:

“Competing in a busier space just means magazines have to prove their value rather than just taking advantage of impulse buys. Frankly, if bored shoppers are the only reason a magazine can keep going, it probably isn’t that good a magazine. Instead of trying to protect the old, dead business model, let’s work on creating great magazines that people really want to read.”

Otherwise, magazines could all come polywrapped with a pack of gum inside to help keep readers focused on the contents. I dunno, I’m chewing on it.