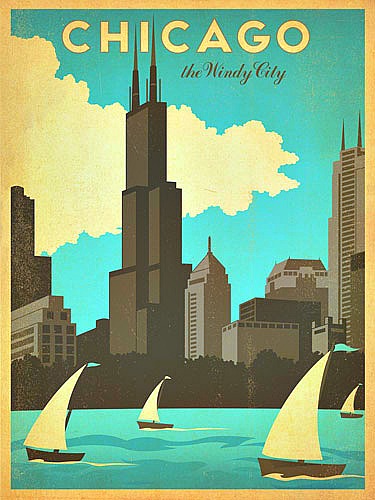 In my mid-twenties, when I could have bottled my excess energy,  I was presented with a choice: Chicago or New York.

I weighed both options and chose Chicago. That runs counter to the narrative we’re used to for young women with vague dreams of writing. To arrive at that decision, I didn’t make a long list of pros and cons. I didn’t consult with anyone either. I used my gut and settled on the answer in seconds.

The Cézanne canvases in Chicago pulled me west first. But the city’s mythology kept me there (for a time). Chicago’s core sprung up like the pyramids after the Great Fire of 1871. Her speed, resilience and vision were breathtaking.

I like underdogs. I like ambitious city builders who fight like hell for good design. And I like big blue beyonds. Chicago has all three in spades. Also, less soot and cynicism settled on Chicago than New York. That better suited my temperament.

When I had an address there, I liked how the wind, constantly sweeping through the streets, lifted my imagination and kept it there. My dreams never hit the pavement in Chicago. They would have in New York. Frantic is not my style. Neither are sharp elbows or winning at all costs.

After living in Hyde Park (Obama’s old neighbourhood), I tried on the New York narrative when visiting Manhattan and tried it on again when I was back at my desk in Toronto and blogging about New York. Nope, it still didn’t get to me like Chicago.

I may have happily set up shop three Great Lakes over, but I still turn to Chicago — to the city sketches of Carl Sandberg, to the turbulent genius of Frank Lloyd Wright and the gravity-defying lengths of steel and glass at every turn — to pump my imagination and lift my words off the page.

This post is dedicated to my Chicago mentors: Suzanne Folds McCullagh and Douglas Druick.
[ssba]