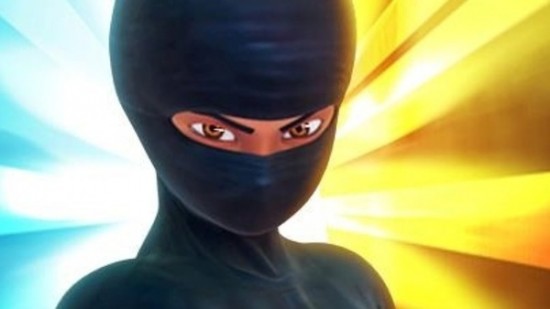 When Pakistani pop star Aaron Haroon read about girls schools in his country being evacuated and shuttered by extremists, he decided to take action.

He assembled a team of digital artists and editors in Islamabad (mostly men, but clearly good ones) to create a new superhero who is underscoring just how lame Disney’s Western princesses are. Dora the Explorer is the lone exception, and now she has an ally.

By day she’s Jiya, a mild-mannered Pakistani school teacher who opts not to cover her hair or face. Just by teaching and moving through life bare-faced, Jiya is already courageous and we haven’t even got to her alter ego yet.

In the face of evil and injustice, Jiya turns into The Burka Avenger. She wears the burka like batman sports his black leathery wings and mask, and throws quill-tipped pens like darts.  She saves most of her strength, though, to clomp the enemy (twisty mustachioed Taliban members) over the head with books and, hopefully, knock some sense into them.

I can think of no occasion when the burka is a symbol of strength, freedom or hope — except in this case. Here Haroon has appropriated the Muslim symbol of oppression and turned it into an emblem of strength. This is not a justification for the burka, but it certainly turns its meaning on its head.

May the force be with Jiya and Malala Yousafzai. And may the pen be mightier than the sword someday sooner than later.