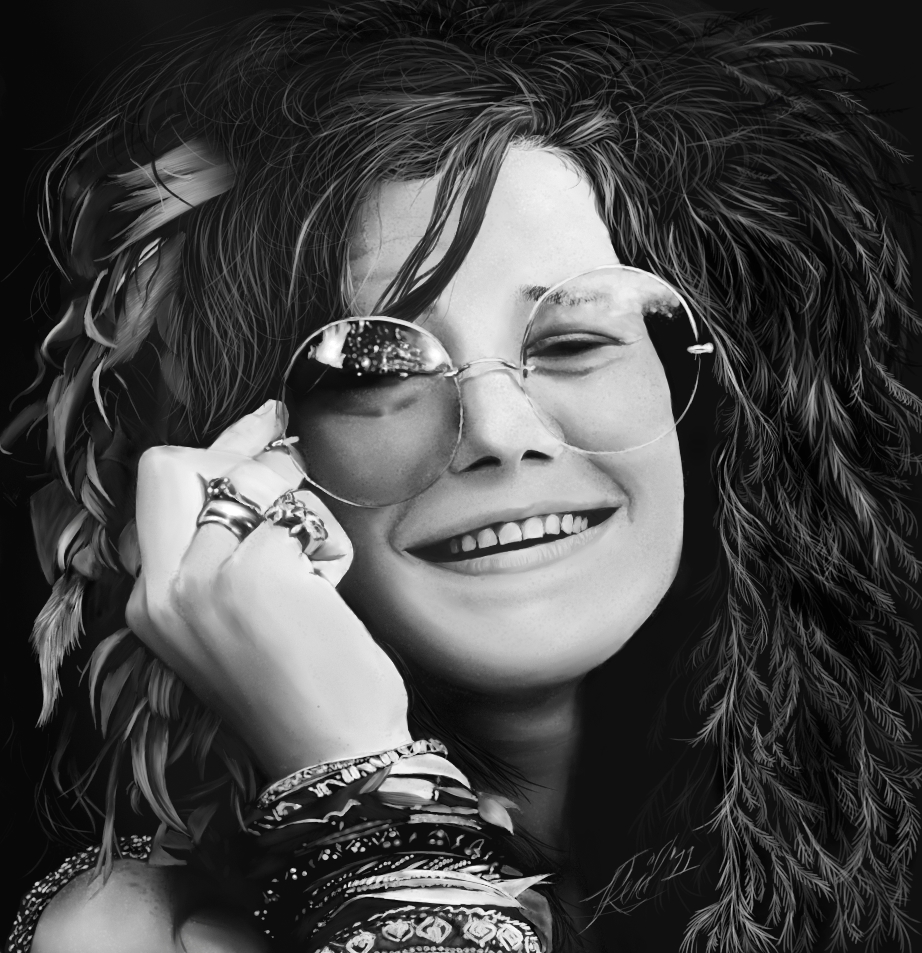 I just discovered Janis Joplin. It only took me 40 years and three Dick Cavett CD’s to realize what a comet she was.

My four year old self said she was a bad lady. She took drugs. My dad said so. I thought you were supposed to dismiss people like that, but he couldn’t take his eyes off her. That was suspect to me on many levels. I mean, she was so wild: the hair, the ostrich feathers, the vests, the bad complexion, the raspy scream. Meanwhile, he was so urbane: the glasses, the goatee, the top-of-the-line mechanical pencils, the arch inserts in the lace-up oxfords, the conductor’s baton he raised every time he put on a Beethoven LP.

Dad leaned forward and cupped his hands whenever Janis spoke. The only other time he did that was in meetings with fellow architects, or when Rod Laver had match point. With Janis, Dad made it clear he was listening to another human being. So did Dick. With Raquel Welch, who also appeared on Cavett (with Janis), Dad made it clear he was watching a woman. I could tell by the way he sat back in his recliner to take her in. Dick couldn’t do that. He was obliged to furrow his his brow at her quasi-intellectualisms and keep his eyes up, back straight. Watch it today and, I’m sorry to say, you’ll tolerate Raquel’s mannered replies for about 8 seconds before reverting back to her spectacular thighs. Janis was different. She held some key to life because Dad would shush me whenever I talked over the TV. I learned to hold my questions while she described life on the road, went off on Spiro Agnew or shouted about love with the guys in the Full Tilt Boogie Band.

If Raquel was everything a woman was supposed to be, Janis was not. Newsweek once called her “a volatile vial of nitroglycerin that blew the rock world wide open.” That was the good press (and she read it all). The bad press compared her to Lassie because of the way she panted and caught her breath after every song. That hurt. While Mick Jagger had his pick from a tidal wave of groupies, Janis had to weather being stood up by a string of dates. She connected the dots, from the dog comments to the one-time fiancé who disappeared from her life in her early twenties. And for her entire short life, Janis was haunted by the frat boys at her alma mater, The University of Texas at Austin, who branded her “the ugliest man on campus.” This was in the early sixties when she was starting to make a name for herself singing (bra-less) in clubs.

Later, in almost every press interview she gave, Janis tried to diffuse aggressive or mean-spirited reporters by explaining, “Everyone wants to be liked. I’m no different.” But it was impossible to ignore how against type she went. No one could imagine Janis wearing oven mitts. Or pushing a “reel” mower in capri pants. Or doing a French striptease — all typical housewife stuff back then. Then again, it was just as hard to imagine Raquel doing any of that, unless it was a domestic goddess shoot for a men’s magazine, which she must have agreed to at some point.

The funny thing is Janis and Raquel sought each other out at industry parties, as each made clear on Cavett’s stage. Janis didn’t dismiss Raquel for her glamour and Raquel didn’t dismiss Janis for her hard-living ways. The beatnik and the sex bomb traded stories about their lives. At the opening party for the film, Myra Breckinridge, Janis blew smoke in Welch’s teased hair and said she’d been asked to take part in an upcoming film. “Oh yeah? What part?” asked Welch. “I don’t know, yet,” said Joplin,” but it won’t be a virgin. I’m not that good an actress.” They both laughed. When Welch retold that story to Cavett’s audience, the ensuing laugh made Joplin shrug.

What’s touching about the dynamic between these two women is the way Janis patiently extracted meaning from Welch’s overly ornate way of speaking (she’s still talking that way with a lot of, “Yes, well you know …” and “In a manner of speaking…” ). This was especially true during one conversation they had about the polarization of the political left and right [in 1970], and the virtues of compromise versus patiently listening to the other side. Welch stood for compromise, Joplin believed in active listening. Cavett and the other guests (newsman Chet Huntley and screen legend Douglas Fairbanks Jr.) were forced to watch this rally in silence. The press framed it differently, of course, saying that the two “went at each other” on the Dick Cavett Show. They did go at it, but not like two cats but as comrades earnestly trying to interpret the news and events of the day. Cavett never stopped being fascinated by Joplin.

“Why is it there aren’t many of you super star rock ladies?” Cavett asked Joplin, which made her squeeze out a raspy giggle. “There’s Mama Cass, maybe. And Gracie Slick. But they just aren’t like you. I know a lot of ladies sing, but you’re not in the same category with Kate Smith.”

“It seems so natural to me,” said Joplin. “But it’s not feminine, what I do. I mean to get out and really get into the music and get to the bottom of the music instead of floating on the top where most chick singers do. They ‘woo, woo, woo’ on top of the melody instead of getting under it and into the feeling of the music. We did Europe last month and scared them to death.”

When asked, Janis could think of only one other singer who got to the bottom of a song: Tina Turner.

“You will. She’s a fantastic singer, a great dancer,” said Joplin, reinforcing Turner’s hipness with the snap of both fingers. “A lot of people don’t know who she is. It’s too bad. She sings with the Ike and Tina Turner Review. Ike is her husband and band leader, and Tina’s the show.”

“Come by some night, Tina,” Cavett said looking right into the camera before breaking for a commercial from Bulova watches.

I could barely watch Janis’s last appearance on the Dick Cavett show (August 3, 1970). She was so drunk and stoned she failed to carry on a conversation with him. The thoughtful exchanges were gone. The audience never saw the two tumblers of Southern Comfort behind Janis’s chair. But they did see the styrofoam cup of “coffee” (Southern Comfort) she carried on stage, and the cigarette dangling from her lips. She was still sucking back on that cigarette at the mic, half a second before she broke into “Half Moon” and “My Baby.” Two months later, on October 5, 1970, Janis was dead. Cavett remembers hearing the news  while he was standing in his kitchen listening to the radio. “For whatever reason, she liked doing my show,” he recalled in 2005. Cavett was grateful he helped create a record of her when she was very much alive. “She was a splendid soul,” he said. “Good hearted, energetic and she’d read Edith Wharton.” Daddy, you were right.

A Night With Janis Joplin is currently in previews on Broadway.