A foot in the door

Every era has its hiring challenges. In the Dirty Thirties, when there was no work, men spent more time in soup lines than job lines.  “You couldn’t even buy a job,” so went the popular catch phrase of the era.

By the 1950s, there was plenty of work, although the best jobs were reserved for men. Here’s a typical scenario from that time: 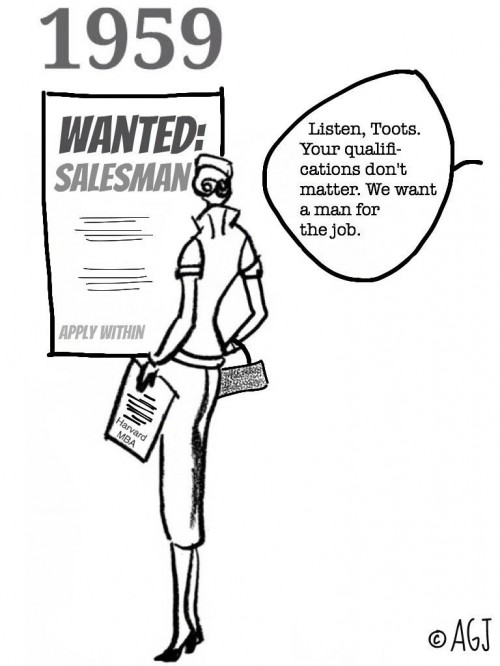 “Toots” (her name was actually Margaret), only managed to get a job as a receptionist at this company, although she was qualified for sales. Once she was in the door (that’s all she needed), she slowly revealed her smarts to a sympathetic male colleague while keeping her Harvard M.B.A. a secret from the rest. After a decade, Margaret (still “Toots” to the guy in HR) was finally moved into sales. Throughout the 1960s, the men she trained were repeatedly promoted ahead of her while she caught and discreetly corrected their missteps. By the late seventies, with her sexual appeal no longer a distraction and her seniority beyond dispute, Margaret was promoted to Chief Sales Officer. 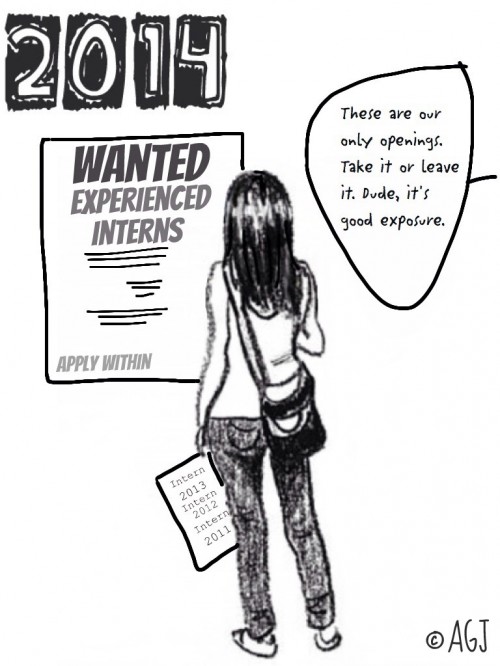 Now it’s 2014 and a different mix of circumstances has resulted in a hiring pattern that’s affecting young women and men alike. It centres around the options available once you’ve completed your first internship, then your second, your third and, maybe, you’re even considering a fourth because the exposure of the first three hasn’t yielded fruit … yet.

Getting a job has always required hustle, grit and persistence. Guarantees? Are you kidding me? There are none. But in the last two decades, more businesses have been turning up the dial on unpaid labour. For most of us — and I include myself in this — we were either too busy and ambitious to notice what was happening (after all, we got great internships) or too polite, paranoid or privileged to point out how the practice was starting to get out of control.

Through all four of my internships (1990, 1992, 1993 and 2004), I was acutely aware of being on the right side of luck. Sure, I wrote my way in every time with a compelling cover letter, then secured scholarship money from my university when the internships didn’t or couldn’t offer a stipend (however, three of my four internships did pay me almost minimum wage). I also had a restaurant job and my parents to fall back on when times got tough. Coincidentally, so did every other intern around me when I was at The Smithsonian Institute in Washington, D.C. and the Art Institute of Chicago (not the restaurant job, the parents). Not so at the Musée D’Orsay, where I worked with French and Dutch research interns and fellows who were fully subsidized by their governments. These students didn’t have the shiny hair, expensive watches and delicate jewelry we all had in Chicago, Washington and Toronto. They seemed not to have two sous to rub together and lived on coffee, cigarettes and paperback classics. But that was cultural, not from a lack of assistance.

Before I segue to the present, I want to do a shout out to my parents, Catherine and Trevor. They were so pro-arts, it was laughable. I’m still smiling at their warped priorities, and taking great pleasure in the beautiful books on art and culture they presented me over the years, and which now line my apartment. About twice a week, I interrupt my writing and drawing efforts to throw my thanks to the sky, “You guys rock!”

I kept tabs on the interns I worked with over the years and all of us hustled once again to find entry-level positions in galleries, film production companies, magazines and academia. In the nineties, entry-level jobs had not been wiped out by unpaid internships. And this is what differentiates the circumstances facing young people today. Unpaid internships turned into a more widespread practice when the Great Recession and social media hit simultaneously in late 2008. That’s when “free is the new business model” became the catchphrase of this era and magazines, like Toronto Life, dropped the $500/month stipend for interns. Now students of means have an even more distinct advantage than they did in my day. Although, the cost of four years of journalism school is way more prohibitive and questionable than an internship, as Kat Tancock pointed out in a discussion this week on Facebook. Educational institutions, she said, continue to try to make money training people for a career with bad job prospects.

The moment free labour went viral, at least in my mind, was last September when the upscale Fairmont Waterfront Hotel in Vancouver placed an ad in the local papers for intern bus persons. That was when the argument, “It’s good experience and great exposure,” showed just how rotten to the core it had become. For veteran broadcast journalist, Howard Bernstein, who set up and lobbied hard to establish an internship program for journalism students at Ryerson University, the turning point for him happened when he discovered talented interns were being charged with producing segments on prestigious news shows … without pay. He stepped in. “I’m not against internships, I’m against what’s happened to them,” Bernstein told Jesse Brown in a really good interview last October on Canadaland, the source for all of Bernstein’s quotes in this paragraph. “When you get used to getting things for free, you expect it,” Bernstein said. “It’s a horrible practice.” Over the years, Canadian broadcasters would phone Bernstein and ask, “How many [interns] can we get this year?” The number they were requesting kept going up. In 2004, when I was a paid intern at Toronto Life’s old Front Street location, we alternated between two or three interns every four months. Maybe the size of the room dictated that number? When the Ministry of Labour touched down last week, there were seven unpaid interns at Toronto Life (now on Queen Street East) and eleven interns at The Walrus. I’m wondering if these magazines even need freelance fact checkers any more if the interns are handling it all? After my internship ended, all us former interns picked up good gigs fact checking for $22/hour with Toronto Life.

Talented young journalism students, some of them editors in chief of their school papers, have been emailing me over the past few months, and several touched base again last week after the Ministry stepped in. What should we do? they all ask. It’s such a loaded question. I would not be writing for magazines if were not for my Toronto Life internship (but now blogs are a way to get discovered too, so …). Still, I’m not the only one genuinely disturbed by the way the programs have evolved over time. Remember, in the early days interns did not replace anybody. They were there to observe and were even thought to be a bit in the way. “An internship should be a learning opportunity,” Bernstein reiterates. And as Derek Finkle, Toronto Life’s very first intern, pointed out yesterday in his piece for Storyboard, students can still apply for paid internships at Maclean’s, Canadian Business, Azure, The Globe and Mail or the Toronto Star, among others.

As for the publishers who are cancelling their unpaid internship programs, Finkle asks what the Silent Majority has been thinking all along: has the money really disappeared or just been redistributed? That’s the other big story of our era.