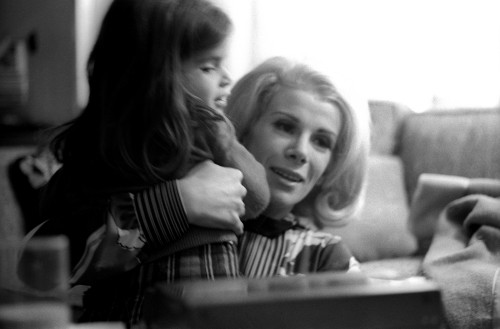 Photo from the Melissa Rivers Collection

Back when when I watched more TV I occasionally landed on one of her fashion rants, but never stayed long. Most of the time, I don’t find that kind of aggression entertaining. But I felt her talent, so I paid attention to her comings and goings.

In more instances than I can recall, the social commentary I got from Joan Rivers and Robin Williams (about things other than fashion) was smarter and more to the point than any explanation laid out in the op-ed columns of the world’s best newspapers.

I especially paid attention to Joan after an interview she gave to a local radio station in Toronto seven or eight years ago. Rivers spent a lot of time in Mississauga, “Toronto’s Hoboken,” as she called it, pushing winking brooches from her Joan Rivers Classic Jewellery Collection to Shopping Channel viewers. She’d coax the phone lines to light up by placing two brooches on her pant suit jacket, right over her nipples. “This’ll draw attention.” Or else, she hammed it up by donning a mystical fortune teller’s puffy cap. “I know why you’re here, [to buy jewellery],” she intoned in her raspy Borscht Belt delivery. It was a direct rip off of Johnny Carson’s Carnac The Magnificent.

In that radio interview, Joan did as Joan did: alternating between jokes, acknowledging her husband’s suicide, the cancellation of her ’80s talk show, the temporary estrangement from her daughter, Melissa, and the countless patch-ups to her nose, eyes and lips. But here’s the kicker: I don’t remember exactly what it was that Joan said that made me go, Wow. I think it was something about perseverance. But I vividly remember how she made me feel. That’s when I added her to my list of beacons. From that chaotic mess of talent, ambition and missteps sprung this humility. It wasn’t plotted out ahead of time like the jokes she filed away on thousands of recipe cards. She didn’t even know it was coming. It was air-distilling, though.

Six months after her mother’s death, Melissa Rivers is struggling to adjust to life without Joan. This weekend, in an LA Times profile by Amy Kaufman, the younger Rivers noted that “when your first parent dies, it’s a comma; when your second is gone, it’s a period.” Stating that second part has been hard for Melissa, says Kaufman. “You can almost see her squaring her shoulders.”

If it helps, in my experience that sense of finality wanes. In a commencement speech she made in 1989, Joan told Melissa and her fellow graduates at the University of Pennsylvania that “as long as you’ve got a parent left, you can always be a child to someone. The light is in the window.”

I think, given time, that period will have turned back into a comma and she’ll feel the light again.