Social media has scattered blog communities and pretty much killed engagement in blog comment boxes. I’ve seen it on my own site. I average about one comment every six months.

Those two facts alone, some say, are proof that maintaining a blog is (1) old school and (2) pointless. Those same folks say that blogging peaked back in 2010, so why bother crafting fresh material?

By my estimation excitement over blogs peaked well before 2010, but their relevance hasn’t faded. (So why does writing this feel like I’m defending the value of senior citizens?)

I think the best reason for continuing to show your work online was stated by podcaster Neville Hobson in an exit interview he gave last week to Joe Thornley on the Inside PR podcast.

Hobson, a trailblazer in “home brew radio,” is hanging up his mic after 10 years as co-host of the Hobson and Holtz Report to refocus his efforts on blogging. Here’s what he said,

“The big thing about podcasting [and I’d argue, blogging] is that it gives you the confidence to speak about ideas that might not be fully formed; they could even be something that you yourself think, ‘This may be a dumb idea, but I’m going to articulate it anyway.’ You end up developing a greater confidence in being able to share thoughts that aren’t fully formed. Many people won’t do that until they are confident an idea is thought through and they are not going to look stupid. This does away with all of that and lets you take full advantage of your innate curiosity.” 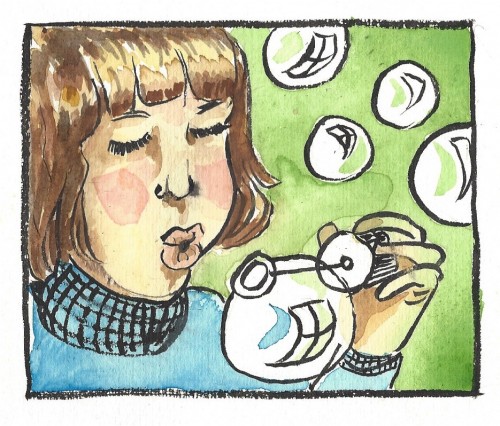 Like Hobson, I believe in taking myself and my audience on a journey. And by “journey” I don’t mean going down the path to purchase. We all need spaces that are not about monetization and shares. Sorry, but I don’t want to hang out 24/7 with all those jumpy salesmen on Twitter. The relentless commercialization of Twitter is a big reason why engagement on that platform is down. (Chris Sacca’s love letter/plea to Twitter  nicely lays out its shortcomings).

As we edge past this honeymoon period of “Look At All The Cool Stuff We Invented!!!” some of us are starting to understand exactly what we married seven years ago — I joined Twitter and Facebook in 2008 — and we’ve got the itch. We want to get back a sense of possibility that comes from us, not our gadgets. Why should our phones have the monopoly on possibility? As writer Ursula Le Guin said last fall, “We need writers who can remember freedom. Poets, visionaries and realists of a larger reality [than what technology offers].”

I’m here at alisongarwoodjones.com because I think technology is awesome. The tools we have at our fingertips have given us the entire world. Our ideas are even available to the crew on the International Space Station. But our sense of possibility, even our happiness, are directly tied to how we use these tools. So please don’t squander this opportunity. Give randomness, sales speak and top 10 ways to … (fill in the blank) a rest and commit to doing something worthwhile. I’ll leave it to you to define what that is.

And let this be the only thing I’ve sold you today. You can share it if it meets your definition of worthwhile.