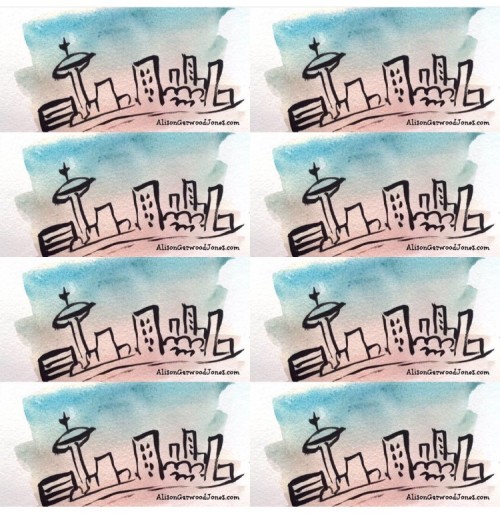 Did you know that when the The Jetsons debuted in 1962, George was a Digital Index Operator at Spacely Space Sprockets Inc.?

That  job was funny then, but weirdly familiar now, like so many gadgets and scenarios in that great cartoon.

If you really want to geek out, George earned his living pushing a series of buttons on the Referential Unisonic Digital Indexer Machine, a task he seemed to carry out just fine with his feet up on his desk.

After a three-hour workday, George flew his saucer back to his Skypad Apartment in Orbit City (not always abiding by the 2500 mile an hour speed limit), and was greeted at the door by Jane, Elroy, Judy, Astro and Rosie, their wisecracking maid.

I drew this picture of Toronto down at the beach last summer using Lake Ontario water and a Pentel Brush Pen that illustrator Sydney Smith suggested I try. It has an Orbit City feel to it.

When I looked at the sunset last night, I remembered my drawing, did a quick search for it in my sketchbooks and posted it just as the light was fading over the CN Tower.

After dinner, naturally, I started watching old Jetsons episodes on my computer. The repetitive sound track for that show brought my family back to me and placed me on the carpet with my brothers in front of our flickering Zenith TV in our Danish Modern living room in Dundas, Ontario. Flintstones music has the same effect on me: family.

I’ll be watching another episode of The Jetsons tonight. And let it be said, head animators William Hanna and Joseph Barbera showed a level of creativity and problem solving (how do the Jetsons get their dinner, make phone calls, get home from work, etc.) that was, as Judy Jetson would say, “Out of this world!!!”