How to stop a mean girl

A reprise of one of my favourite posts:

I wasn’t a mean girl in school. That automatically made me a target. I didn’t solve this by auditioning to join the girls on their power trips. Rather, I tried to exist in the world despite them. My refuge was drawing.

Trays of rainbow markers thrilled and distracted me most of the time. But sometimes the girls’ full court press of taunts knocked me right over: “You can fit a popsicle stick through that gap.” “Look at those hairy arms.” “What did you get on the test?” And the brilliant, “You smell.” I did occasionally lift an arm to confirm whether or not that was true. I also spent years stroking the dark down on my arms wondering what was to be done about it. My dad’s razor felt too drastic. Finally, my mother brought home a box of Jolen and every two months, or so, we’d make a date to paint my down from brown to baby-chick yellow. 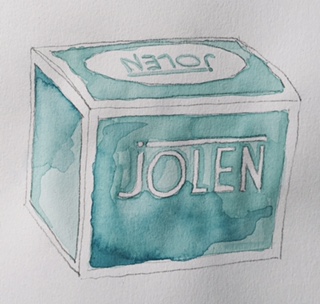 This is a tale as old as time. All kids just want to be liked. But I wanted something that felt harder to achieve: I wanted to exist on my own terms and still have friends. The idea of being a follower and having fake friendships felt worse to me than going to math class. But I stuck to my plan. That meant having to occupy a kind of No Man’s Land for a while. I was individualistic, but not a weirdo, and, yet, I wasn’t what the students would have considered “popular.” I was There.

All that changed as I ascended to my senior year of high school. Because I was popular with my teachers, eventually everyone else just followed their lead. What the adults liked about me, I liked about me: I was focused, intelligent eager to learn, and full of laughter. With the support of my parents, I held out and gave those qualities the attention they deserved. Those choices early on have helped me navigate through all kinds of unpredictable and confounding behaviour. As the mean girls and I headed towards graduation, they still went about alternately courting and ignoring people, but now that I had no emotional investment in them they lost interest in me. 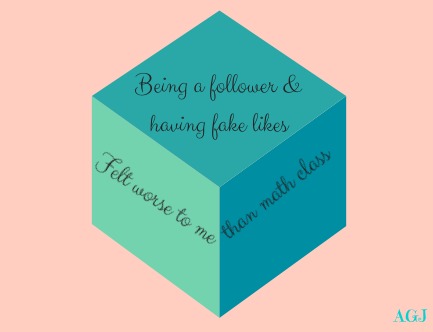 A few years ago, I discovered that a photograph of me being that girl I just described to you had been turned into a work of art. The photo, taken by my dad, shows me drawing on the back of an architectural blue print (see below left). Decades later the Winnipeg art collective, The Royal Art Lodge, ran across my photo and turned it into a silk screen called “Poster Making.” Click here for the full story of how this happened.

Lodge members Neil Farber, Michael Dumontier and Marcel Dzama saw something in me that they recognized in themselves, and all kids. Innocence. Focus. Determination. Click here and  find out more from my interview with Neil Farber. Like all creatives, the artists borrowed my likeness and made it their own. Most notably, they added the words “FUCK OFF” to the blueprint I was working on. It’s not something I would have ever written or said back then. The result is funny, existential, idiosyncratic and became an instant cult hit. The print has been sold out for years, but, from time to time, it pops up on the secondary market at considerably higher prices.

It wasn’t long before writer and publisher Dave Eggers saw the print and featured it in McSweeney’s. Readers loved it and the print was turned into a McSweeney’s Post Card Set. But the story doesn’t end there. Eggers hand-picked “Poster Making” to be in a salon-style art exhibition called “Lots of Things Like This.” It travelled to New York and Amsterdam where it appeared next to the  drawings and paintings of Leonard Cohen, David Mamet, Andy Warhol, Art Spiegelman, Kurt Vonnegut, David Shrigley, and others. Since then, I have seen framed copies of the print show up on Facebook in shots of people’s living rooms, kitchens and home offices from Toronto to Cincinatti. This month’s issue of Design Lines (p. 77) shows the print in the Toronto home of an ad agency exec and his family (below). 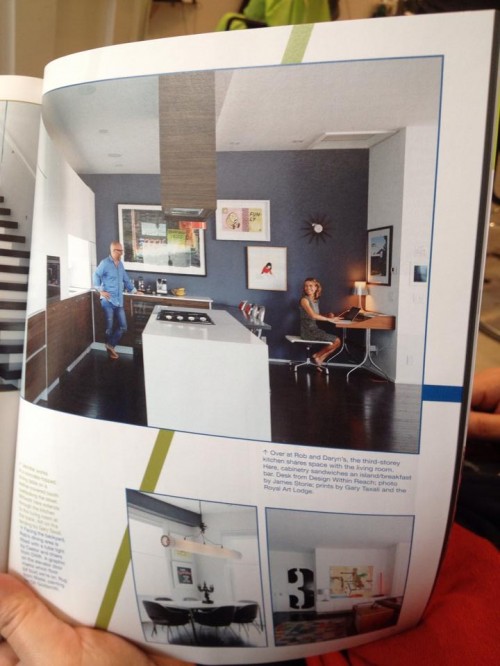 My friend Grady spotted this and sent it to me.

The print has also been written about in dozens of blogs, as this screen grab of a Google image search shows: 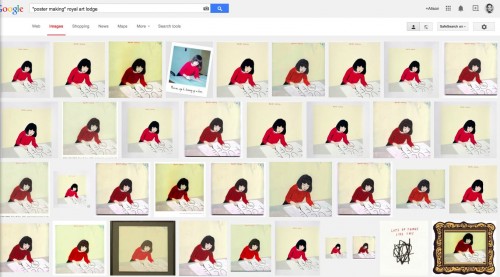 Being the inspiration for something creative is hands-down the best way to go viral.

Of all the blog posts that write about and feature the image, my favourite, so far, is  “The Post of Bad Swears” by unruly.ca. It places Royal Art Lodge’s likeness of me next to the famous picture of Johnny Cash giving photographer Jim Marshall the middle finger salute. Frank Zappa’s famous nose pick and a stream of other art works are also pulled in for comparison (see below).

I have to laugh at the careful and sincere little girl in the red blouse who started it all. Who knew she would  go on a journey with a band of artists and became the standard bearer of a message that resonates with so many of us in this age of digital creativity and reinvention. It turns out, I’ve always been a believer and a dissident. So get out there, people, and create! You know what to tell the naysayers and the bullies. 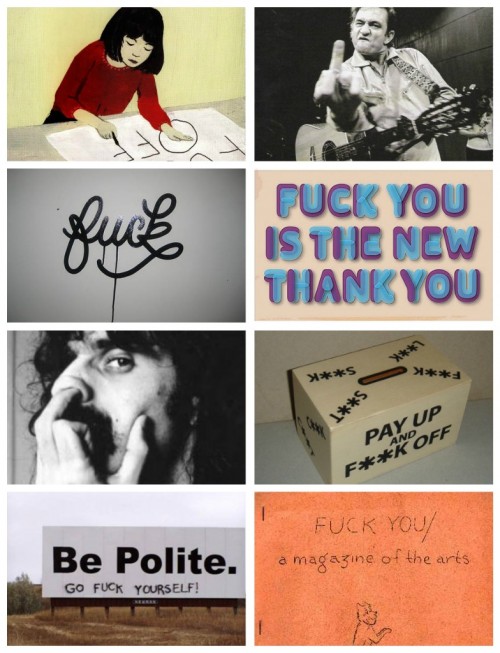 Images from left to right: “Poster Making,” by The Royal Art Lodge, courtesy of the artists; Johnny Cash, San Quentin Prison, February 24, 1969 by Jim Marshall; “fuck” by daveisdrawing on Flickr (as cited by unruly.ca, although not found by  the author); Frank Zappa, Nasal Birdflip (origin unknown – please forward if you find); “Fuck You Is The New Thank You” by beejay at www.lettercult.com, according to unruly.ca (To the author’s chagrin, original still not found); The Swear Box by Gilbert + George, 2007 (available for purchase here); “Be Polite” billboard (origin unknown); FUCK YOU / a magazine of the arts, 5.2, 1963, Published by Ed Sanders and Fuck You Press.