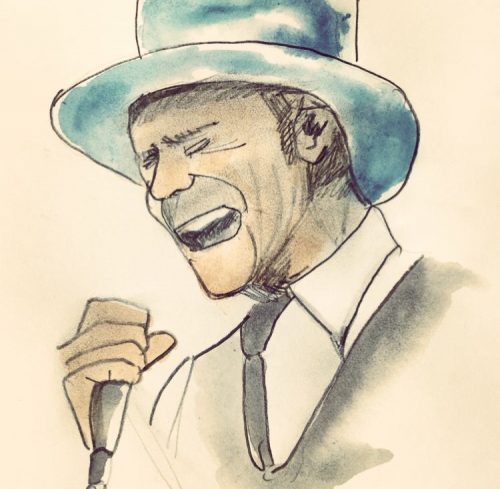 Gord Downie in his last concert by Alison Garwood-Jones

When I was a student at Queen’s University in the late 1980s and early nineties, my tape collection alternated between love anthems (Whitney Houston and Mariah Carey), girl bands with matte lips and cool hair cuts (Wilson Phillips) and duos with no hair cuts (Indigo Girls). Throw in some salsa from the Gipsy Kings and you pretty much have my music profile from that time.

Like every Queen’s student, I knew about The Tragically Hip and saw posters of their next show staple gunned to hydro poles around Kingston. My classmate Leslie even married their lead guitarist, Rob Baker. A week after their nuptials, she returned to our small seminar on British art with a quiet perma smile. Still, Gord’s voice (his singing voice) and overall weirdness didn’t cut through my AM Radio bent. Strangely, though, his lyrics “38 and never kissed a girl,” unknown to me then, did cross my mind one night 25 years ago when my friends and I were at a pub in Kingston and turned around to see David Milgaard sitting in a corner. Alone.

This is one of many examples of Downie’s ability to capture a feeling, a moment and a place, all the while tapping into the two central preoccupations of Canadian poetry and fiction: survival and victims. (h/t Margaret Atwood). And now that I’m truly delving into Gord’s lyrics and poetry (thanks to my friend Marie), I’m going specific and broad in my thinking. I’m seeing how the Hip fit squarely into The Triumph of Narrative journalist Robert Fulford described 15 years ago in his Massey Lecture on storytelling. Fulford described how human lives shape stories and stories shape human lives.

Last night’s nationally-broadcast concert shows us that as we grow further away from 1867, that lack of conviction we’ve consistently exhibited through the decades whenever we or someone else asks, “What does it mean to be Canadian?” is being progressively overwritten by this surprisingly intense and nuanced behaviour as complex and changeable as love itself. It’s nothing like America’s self-love — so sure, so entitled, so prone to devolving into the grotesque. The Rio Olympics showed us where that can take you with Ryan Lochte and the traitor backlash Ashton Eaton experienced when he donned a Canada hat to cheer on his Canadian wife, heptathlete, Brianne Theissen-Eaton.

If I can paraphrase Fulford, last night’s concert in parks and squares across the nation provided us with a glimpse of inner lives being lived around us. “The glimpse will always be brief and tantalizing, like landscape being revealed for an instant by lightning, but it suggests a wondrous richness, a splendid variety. It rebukes glib assumptions about the blandness of our fellow citizens.” And, if I may add, it builds on itself.

Thank you, Gord, for bringing us into our lives and our country.