What the world needs now is Canada — and some love, sweet love.

Last night I got the best history lesson I’ve had in years when I watched former PM, Joe Clark, Barbara McDougall, Bill Graham, Lloyd Axworthy and Chrystia Freeland get up and talk about Canada’s impressive record of speaking truth to power. 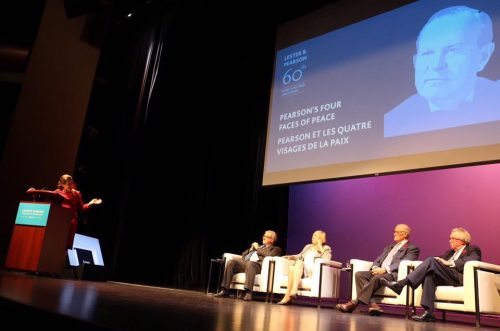 The panel gathered at the Isabel Bader Theatre at the University of Toronto to mark the 60th anniversary of Lester B. “Mike” Pearson’s Nobel Peace Prize for resolving the 1956 Suez Crisis. At the time, the Nobel selection committee credited Pearson with “saving the world” through his work with the United Nations.

Everyone on last night’s panel agreed that there was no better time to think out loud about the significant role Canada must continue to play in resolving and reshaping the current global disorder.

What became clear pretty fast is that the “big swinging dicks” vying for power right now are the kind who delight in pumping toxins into democracies. None of the distinguished panel used the term “BSDs” (thank you Michael Lewis), but all of them, as former and current Ministers of Foreign Affairs, were very blunt about what is at stake, and how Canada must step up and assume our historic role as Chief Architect of multilateralism.

Multilateralism — or collaboration around a common good — is the Canadian ideology that Pearson espoused as Canada’s Secretary of State for External Affairs, and, later, as Prime Minister. Empathy, bridge-building and peacekeeping were the great hallmarks of Pearsonian diplomacy and they became the agreed upon values the West adapted after World War II, said McDougall. Pearson understood that democracy depended on our ability to manage our different opinions.

But Mike was a realist, and no lap dog to U.S. foreign policy (a common slight thrown our way). Pearson knew that diplomacy without arms was like an orchestra without instruments, but war as an instrument of policy would no longer work in a nuclear age. We cannot defend our values by war, he said, because war has come to mean total destruction. His exact words from his Nobel acceptance speech were: “We have ensured by our achievements in the science and technology of destruction that a third act in this tragedy of war will result in the peace of extinction.”

Pierre Trudeau understood that too. “I don’t think I’m speaking out of school if I share this anecdote,” said Axworthy. He recalled a moment in the early 1980s when he came to a cabinet meeting one morning and Trudeau announced that he wanted to lead a mission to go from capital to capital around the world and “suffocate nuclear weapons.” “He wanted to be the voice of clarity and courage, and to say things that other leaders were afraid to say.”

Axworthy brought up other seminal (albeit lost) moments in history when Canada spoke her mind. “We were the first country to declare ourselves a non-nuclear nation in 1945,” he said. “We had the fuel and the delivery systems, but what was the trigger for that? There were no nuclear protests in the streets.” It was decided in confines of cabinet, he discovered in his readings of history. The way we made our country come together through public policy shaped who we became.

“We were also the first nation to tell the Americans that they or the Soviets would destroy the world,” said Axworthy, “and that they had to put their nuclear weapons under international control.” Mike Pearson looked Harry Truman and McGeorge Bundy in the eye when he delivered that message. On American soil, Pearson later spoke out against Lyndon Johnson’s participation in the Vietnam War.

Axworthy, who got back last week from a six-week trip to the Balkan Peninsula, said that “the degree of animosity in Europe right now is a Brexit-style anguish. It’s everybody for themselves. The system is broken.” What was clear in his rounds of talks with the Balkans is that they believe that Canada will be the leader the world needs.

But as former Defense Minister, Bill Graham pointed out, “there is no peacekeeping in the traditional sense anymore,” not in a digital age, a nuclear age and with the rise of drones. We need to address peace by removing the causes of war and by looking at the international organizations we belong to and strengthening then.

The evening ended with Clark saying, “We have even more influence today than we did in the 1950s. No one has our reconciling competence, and we don’t have to sit at the head of the table to do the work.”

When fellow Albertan Chrystia Freeland arrived on stage, she got right down to business. “We have another Pearsonian moment before us,” she told the crowd. “Canadians feel a national connection for oppressed people around the world. It’s up to us, the next generation, to modernize, renew and shore up those multilateral institutions that Pearson built. As Lloyd pointed out, people around the world think Canada can do this. The hard part is we have to deliver ” 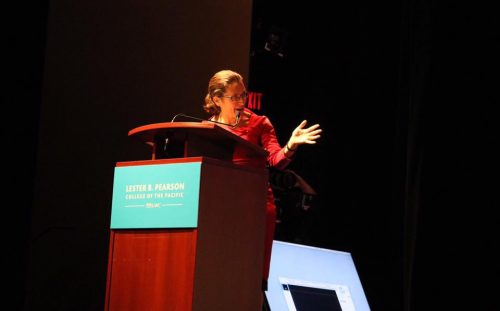 But as Freeland recently tweeted in her dealings with the U.S. over NAFTA: “Capitulation is not a negotiating strategy.” She has arranged to have T-shirts emblazoned with that tweet made up for Trudeau’s cabinet. How about some loud socks too?