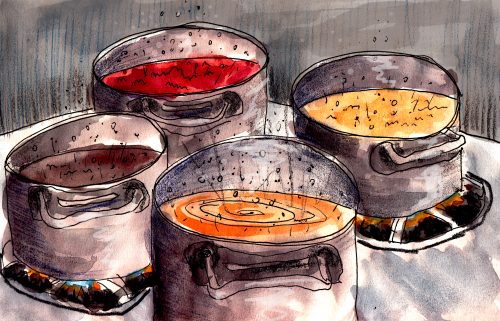 In my latest adventure, I worked as a kitchen prep cook at The Merchant Taps & Tavern.

The Christmas season was busy and they needed extra hands.

Because the burners on the main line were busy for the lunch rushes, the owner set me up with a portable burner in a back kitchen so I could work independently and cook down all the apples I had peeled for the pies.

There is nothing more satisfying than adding heat to a bunch of ingredients and having them open up and flood your sense of smell. Apples, butter, sugar and cinnamon. A simple mirepoix of diced onions, carrots and celery moved around in some butter over a flame.

Bending down and breathing it in increases my sense of wellbeing.

This January, the owner is promoting me to salads.

The above illustration, which I drew on the line using pen and watercolour pencils, shows Greg Garson prepping the bean paste for the cheese & ale dip and a range of pies, including leek & salmon, turkey, and sweet potato.