Say no to racism

I grew up in a multi-racial family. 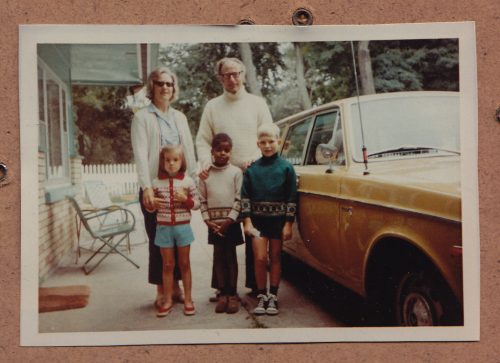 My brothers and I were born at time when Martin Luther King Jr. was doing his most important work, standing up to segregationists in Georgia and organizing non-violent protests in Alabama. Meanwhile, a young couple in Dundas, Ontario — he from London, England, she from Cape Town, South Africa — offered up their bungalow to three babies whose DNA pointed them to Holland, Ireland and Jamaica.

By the time Dr. King’s message became a national, then an international movement, Catherine and Trevor Garwood-Jones were already aligned with the Civil Rights Movement. Mum had travelled between Cape Town and London as a child in the 1930s and forties, but stayed away from South Africa as an adult because of her opposition to Apartheid. She was dead set against ever setting foot in South Africa again until it embraced racial equality — so much so, that when her mother died in 1974, her brothers had to talk her into flying down for the funeral.

I didn’t know this about her until my cousin told me last year. But it made sense. Mum’s opposition to racism played out in the choices she made and the life she lived and the behaviour she spoke up against. Her heart was big and her voice was stern. We all listened and aspired to live up to her standards and expectations for the human race.

In 1960, nine years into their marriage, Trevor set out for Africa and applied his knowledge of construction to some community building projects in Ghana. He was gone for a year — during which time mum became a chain smoker — but he came back with a renewed sense of the harmony and good work human beings were capable of.

Africa wasn’t our parents’ only focus. Dad had an intense connection to the voice and message of Anne Frank and Elie Wiesel. Every Christmas, he sat at the kitchen table and re-read Wiesel’s Night. Dad wasn’t a crier, and he knew what effect this book would have on him, but he waded in anyway. He seemed to make a point of re-reading Wiesel every December so as to renew his strength in opposing the forces that, when the time is right, sink many into a state of utter contempt for humanity. We’re in that time again.

An anecdote: Back in the late 1980s, my brother Richard and I took one of our many trips on the Go Train to Toronto. On a window-shopping stroll down Yonge St., I convinced Richard that we had to go into Stollery’s at the corner of Yonge and Bloor. “They’re having a sale on Lacoste socks!” (I wore alligators on my socks back then). While I was gleefully going through the rainbow assortment of socks, a sales associate had taken Richard aside and told him, “You don’t belong here. Go shop down the alley.” Here we were, two kids who had sat at the same breakfast table that morning and poured our cereal from the same box being treated as polar opposites. Apparently, I was good for business. Richard was not. “Let’s get out of here,” my brother said. We left the store in stunned silence. Or, at least I did. I would slowly learn that this was one of a thousand cuts and arrows Richard had taken (probably to heart). When Stollery’s was demolished in 2015, I privately cheered. But too many old walls are going up again.

I didn’t have the words for my brother outside the store back then, but I do now. Say no to racism: to all the throwaway comments in our daily interactions that some people think are true or funny or OK. Correct them and speak up as you move along. Canadian actor, Andrew Phung, did the right thing this week when he called out a Toronto police officer for mocking a citizen’s driving abilities and yelling at them to “go back to your country.” Phung didn’t out the officer on social media by posting his photo. He showed restraint. Instead, he made a point of describing the incorrect behaviour (and it’s ability to scale) and explaining why it was wrong. He then sent a photo of the officer to Toronto Police Services, and called for disciplinary action.

I grew up in a multi-racial family. But I would later learn that our experience with diversity went beyond my brother Richard. In the early Noughties, my mum’s brother paid us visit from South Africa. On that same kitchen table where I shovelled down cereal with my brothers Peter and Richard, and dad cried over Wiesel’s experiences at Auschwitz and Buchenwald, my uncle laid out documentation and a hard-cover biography from the Cape Town Archives that showed how my mother and he were descendants from a black woman living on Robben Island in the 1700s. The same Robben Island where Nelson Mandela was incarcerated before the fall of Apartheid.

4 responses to “Say no to racism”