In conversation with Evan Jones

We’re living in an era of merging gadgets. Now you can connect your smart phone to your tablet to your laptop and television and stream a movie, a music video, a web series, family photos or a radio podcast right down the conga line of equipment until it hits your TV screen. And let’s face it, TVs are quickly morphing into oversized monitors for magnifying the pint-sized sights and sounds sent first to your palm or lap. But you can also switch directions and stream content from your TV screen back to your phone. 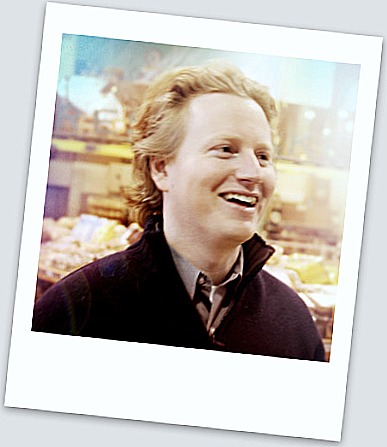 To understand how we got here, I want you to meet Evan Jones (left). Dashing, isn’t he?

Back in the late nineties (or mid-way through Web 1.0), the Dundas, Ontario-native was one of the first to intuit that the online world would one day evolve into a playground for interactive, cross platform entertainment.Mark Zuckerberg followed a similar hunch and  invented Facebook, whereas Jones harnessed his story-telling skills — developed as a double major in film and computer science at McMaster University — and emerged a multiple Emmy-Award winning interactive designer of Alternate Reality Games (ARGs). Remember, at that time, the Web only worked in one direction, and linking and liking were unheard of.

The software and tools Evan built from scratch helped move the online world towards the DIY entertainment we now all take for granted as participants of Web 2.0. And, yup, overnight he went from programming small projects in the silence of a cramped Toronto apartment to fielding calls from Microsoft, Disney, FOX, The Movie Network, Discovery and Bell … all in that same cramped apartment. Hey, this ain’t corporate America, folks, it’s the Internet, land of basements and garages piled high with cases of Coke and Red Bull!

[pullquote]Remember the days when the Web only worked in one direction, and linking and liking were unheard of?[/pullquote]

Today Evan and his business partner,Victoria Ha, run Stitch Media out of their Halifax and Toronto offices.

Stitch focuses on interactive storytelling across multiple platforms, including primetime TV, radio, web and mobile. Their storytelling techniques and working methods are changing how documentaries, websites and films are being created, viewed and thought about.

Jonesing for a Story.

He kindly agreed to appear on my blog too.

AGJ: What attracted you to the digital world?

Evan Jones: I grew up at a great time when computers were exploding with possibilities [Evan’s in his early 30s]. I liked building things through programming and started realizing when I was at university that computer science was really about inventing the software and tools that other people could use to do interesting things. Back then, I was into theatre, radio, doing my own camera work and writing, and I started to wonder how I as going to meld all my hobbies together.

AGJ: That’s when the internet was taking off.

EJ: Right, and all of sudden I saw the chance to marry all of my interests in this new format. The online world was just starting to be about entertainment. This was the late nineties and lots of us  started seeing we could have our own ideas and go out and actually build them. Today, I run the Halifax office of Stitch Media out of my home, and within one block of us there are three home-based new media companies on my street. We joke about it being New Media Row.

AGJ: About seven years ago, you made your mark designing and writing the ReGenesis Extended Reality game [produced by Xenophile Media]. It went on to win many international awards and opened up a new form of popular entertainment. Forgive me, but I just don’t get the appeal of ARGs.

EJ: Alternate reality games aren’t like traditional video games. When the world thinks of video games they think of the first-person shooter. In that type of story, you are the protagonist; you’re the hero running through the field with a gun making the action happen. In ARG’s, you’re like the third-part omniscient in the sense that you’re the investigator unfolding the story. You’re the one finding pieces of information, then figuring out how they connect together so the story is told through the audience, not through the storyteller.

AGJ: So, unlike traditional video games, you feel like you’re a part of something real?

EJ: Exactly, and the characters involved in the story believe they’re real. That’s the alternate reality you have to buy into it. You have to believe just as strongly as the characters believe that the events unfolding are real. I’ve worked on projects like the ARG for the Sarah Connor Chronicles [produced by Millions of Us] which is set in the Terminator universe. The ultimate reality that you have to buy into is that the Terminator is being sent back from the future and Judgment Day is upon us at any moment. 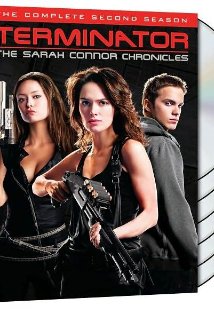 As long as you’re willing to play within that fictional universe, then we have a story to tell you. In this game, cameras are sent back from the future to take photos four years into the future. When you aim the camera at your home and upload the picture to our website, our team of graphic designers and illustrators will change the photograph to look like a post apocalyptic version of the photo. In other words, you get to see how your life would be affected by Judgment Day.

EJ: Let me just add, one of the things I love about ARGs is that we already know how to play them because they’re played in real life. When you’re playing, you contact fellow gamers and the characters in the story by email or cell phone and you solve problems through Google searches. To get the next beat of the story out you need to communicate with everyone via the tools you use everyday. So, you could be going about your day and all of sudden a story line comes through from a character that you recognize and you’re tasked with something you need to do in order to push the story forward.

[pullquote]To get the next beat of the story out, you have to access your email, get on Google or pick up your cell phone.[/pullquote]

AGJ: Actually, that does sound like fun, in a stressful kind of way.

EJ: Many of our projects appeal to a hardcore audience that spends a good deal of time online and is willing to investigate a story at length.

AGJ: You also created much lighter touch projects that are pure entertainment and don’t require any investigative skills. What’s your favourite?

AGJ: What’s it about?

EJ: It’s a comedy about what happens in a Maritime town after the local factory closes and is replaced by an Internet moderation company. The locals know next to nothing about the internet but they’re forced to take on new jobs as content moderators, so they’re responsible for filtering out the most offensive content on the Internet. 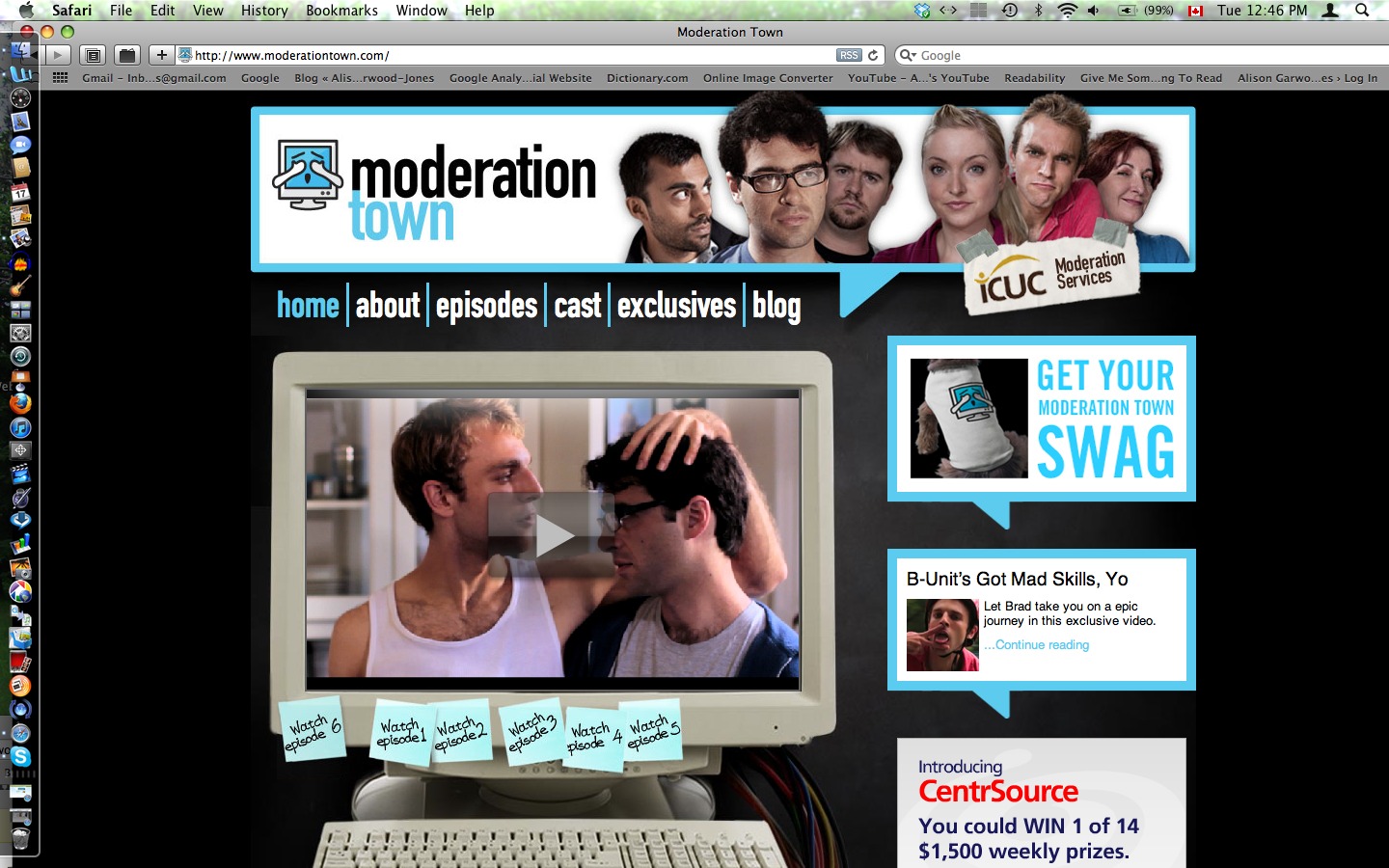 AGJ: As we shift from manufacturing to digital economy, is this really happening?

EJ: Well, I feel like I’ve placed myself in that landscape. We work on a lot of brands with a lot of creative and all of these projects, after a certain time, require someone to moderate. The budget runs out and it’s up to the original producer to be moderator. I’ve seen a lot of stuff get submitted to different projects that I wish I’d never seen! Online there’s an amazing culture of anonymity and it changes the way people act. When you get exposed to the way folks flame each other — through porn and swearing — and it can turn you into a really jaded person. I started reading up on this and found that I wasn’t the only one who was disturbed by what was going on.

But back to your original question: a lot of factory towns on the East Coast have lost their main industries and turned into ghost towns. But most are reinventing themselves as call centres. Some of them are even developing accents from other regions! I just thought it would be fun to watch the follies of small town reinventing itself as internet moderators. I’d love to see the show become an up-to-the-minute portal for people wanting to find out what bizarre things are happening online, other than LOLcats.

Thanks for posting this, @laurenonizzle!

For other Q&A’s from my “In Conversation” Series, see my interview with design guru, Bruce Mau, and Gemini Award-winning filmmaker, Maureen Judge.