Hot off the press

If there’s one thing that revs my engine, it’s talking to talented people. I’ve said it before, but I chose to become a journalist so I could engage with the best and brightest on a weekly basis. Talented people are what put the spring in my step and ignite my imagination until my own ideas multiply like popcorn. 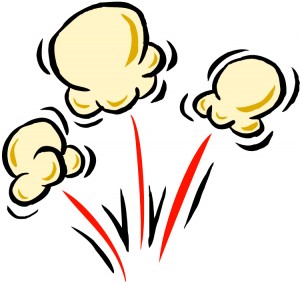 Of course, when you’re starting out in your career, sometimes you don’t have much choice in the matter. You earn your cheques by going along for the ride.

But most of us reach a point in our lives when meaning, thoughts of our fundamental humanity and the need to figure out how we can attend to the greater good become our main preoccupations in life. Having children will do that to you. So will losing a parent. If you’re lucky, you find a way to adjust your career in line with your values.

Hugh MacLeod has done that. He’s one of my favourite cartoonists. He writes and draws about meaning and how to balance it with capitalism. Hugh participated in the Ted Conference in Edinburgh last week and mused about meaning as it relates to business in one of his email missives from Scotland.

“With many big brands, they don’t really think about the ‘why’ factor. The way it works is that they hire terribly clever folk to come up with tag lines, and then throw lots of money at media. These days, most people see it for what it is.” 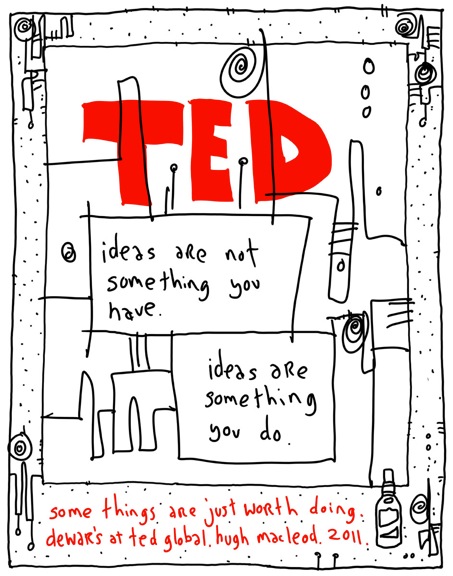 Thanks, Hugh, for letting me post your drawing here. I plucked this one from a whole gallery of cool drawings Hugh has done on the back of business cards, many of which have been published in Seth Godin‘s books. Check Hugh out, or better yet, sign up for his daily cartoon here.

But back to Marta and Vanessa, my other two crusaders for meaning. I wrote about them for Applied Arts magazine’s blog this week. 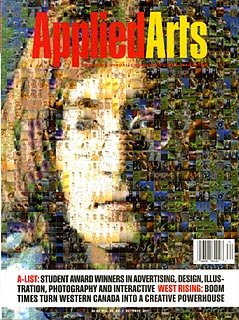 Scanning Marta Cutler’s LinkedIn profile is a bit like trying to decide what kind of Christmas present to buy someone who has everything. Sharp of mind and warm of heart, this virtuoso copywriter and twenty-five year veteran of the advertising world has been the creative director at DDB Canada, MacLaren McCann and Cossette Communications. But she waved goodbye to the big agency life last fall— the only life she had known since she was headhunted straight out of the Communication and Design program at OCA (now OCAD) back in the early eighties — and walked into her future with Vanessa Eckstein, the idealistic and intuitive founder of Blok Design, an award-winning boutique agency in Toronto whose ranks have never swelled beyond four staff members.

Cutler and Eckstein met a decade ago when both women worked together as consultants on a film project. Back then, Cutler knew Blok as the agency that had created the simple aesthetic for Caban, the home accessories store that folded in 2006 after Ralph Lauren pulled the plug on it. “I loved the simplicity, elegance and thoughtfulness behind Vanessa’s work,” recalls Cutler. But it wasn’t long after their first meeting that Eckstein moved Blok from Toronto to Mexico City to be closer to her husband, Mexican film director Fernando Arrioja. “In the back of my mind,” says Cutler, “I thought if we collaborated so well once before, a creative partnership might really work some day.”

But it wasn’t until Eckstein moved her family and her studio back to Toronto earlier this year that the two women decided to revisit their creative chemistry. In one of their many conversations over green tea and chocolate, Eckstein talked about the legacy she wanted to leave her six-year-old son and four-year-old daughter. “When she said the word ‘legacy’ it forced me to really think about what I would be leaving my four-year-old daughter,” says Cutler. “I saw the opportunity at Blok as a chance to build something more permanent and more profound.”

Cutler knew that Eckstein was already on that path with long-term projects like Mexico Ciudad Futura, a picture book with punchy graphics that documents the studio’s ten-year collaboration with a team of architects, engineers and environmentalists to rescue the dry lakebed of Lake Texcoco, some 10 km outside Mexico City. The book outlines a plan to reclaim the lake and integrate the ecology with smarter urban planning that scientists predict will reduce airborne pollution around Mexico City by a whopping 30 per cent. Eckstein believes that the addition of Cutler’s directorial experience, broad connections and way with words will help move Blok towards more idea-driven projects and fewer corporate brand identities, which is how she always envisioned her practice as a budding designer.

Cutler agrees. “One of the reasons I was so ready to make the leap from the world I had known and loved for so many years,” says Cutler, “was because in a normal agency life the projects you work on are 80 per cent marketing and consumer-driven, where you’re helping people decide what they’re going to buy, and maybe 10 per cent of your work is developing campaigns that are all about affecting change. Like Vanessa, I really needed to tip the scale. I needed to make it so that 100 per cent of the projects I was working on were very personally meaningful to me.”

And it’s happening. Through Cutler’s connections, Blok recently teamed up with Public to win the business of Partners for Mental Health. “We are in the process of becoming their creative arm along with Public,” she says. Not only is Blok helping to create their brand identity, but Eckstein and Cutler also want to mobilize Canadians to rethink our fear and silence on issues surrounding mental illness. “This is something Vanessa and I both personally care about,” says Cutler. “Right now my daughter is four, but I imagine a time when she’s 10 and mental health is no longer stigmatized in our everyday lives. Then I can sit down with her and say, ‘I had a hand in that.’ That’s the kind of legacy I want to leave her.”

Not surprisingly, female-centred projects also energize this dynamic duo. As the world wakes up to the value of women, and their untapped potential in third world communities, Blok has joined forces with activist Elizabeth Scharpf to create the brand identity for SHE 28, a campaign dubbed “The Menstruation Project.” Through her travels and research in Rwanda, Scharpf discovered that the lack of access to affordable, eco-friendly sanitary products meant that girls and women were missing about five days a month of school and work.

To alleviate the embarrassment and stigma of their monthly flow, Scharpf worked with engineers at MIT and the University of North Caroline to develop a biodegradable sanity pad made from banana leaf fibres, a more comfortable option than the rags, bark and mud they were using before. Blok is doing the branding for the initiative they’re calling “The Launch Pad,” including the design of the packaging.

“Women are the key to improving Africa’s most impoverished communities,” says Cutler, and with her involvement in Blok’s new direction, the studio’s efforts to make change for the greater good will continue to grow.