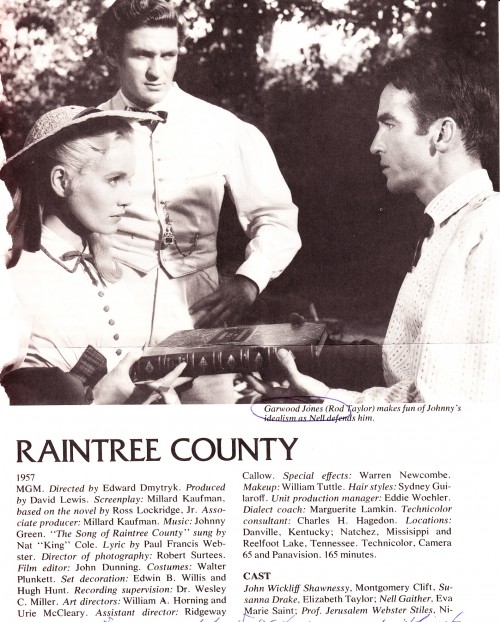 Two weeks ago I opened my mailbox to a cream-coloured envelop the size of a Christmas card and thought it was the leading edge of a swell of holiday greetings sent with a stamp. It was from Chris & Wally, one of my favourite husband & husband duos. These two friends always reach out on statutory holidays and birthdays, and with homemade cards which delights me no end.

As it turns out, a Christmas card from the guys arrived several days after this envelope. This was different. Lifting the flap, I found out my family name had been a character in the novel Raintree County, which hit the big screen in 1957 as a Civil War romance starring Elizabeth Taylor and Montgomery Clift. Rod Taylor played Garwood B. Jones, a sleaze ball Indiana Senator. He’s the tall  one standing in the centre in the pic above. For the record: he’s wearing a  three-piece heather grey wool suit during a swamp scene (the “Garwood B. Jones Suit” recently sold for $900 on iCollector.com).

So much for going on about the singularity of my family name (you can read about its origins in my last post). This Hollywood reference has never popped up in any of my Google searches, probably because it was buried in the back pages — weighed down, as it were, by that middle initial, “B.” I’m chuffed to bits about it. And I take it Chris was too because rather than photocopying the reference, he ripped the thick page from its binding — you can see the ripped edge on the left margin in the photo at the very top — circled the “Garwood Jones” parts in ballpoint pen, folded it twice and dropped it in the mail.

I’m slightly pained and very touched that the guys would destroy a book for me, but more to the point that they would relinquish a handful of their Monty pics for me. Clift has to be one of the few more tortured than debonair Golden Age actors, other than James Dean, who still pursues gay men in their dreams. I fully understand what a sacrifice this was. 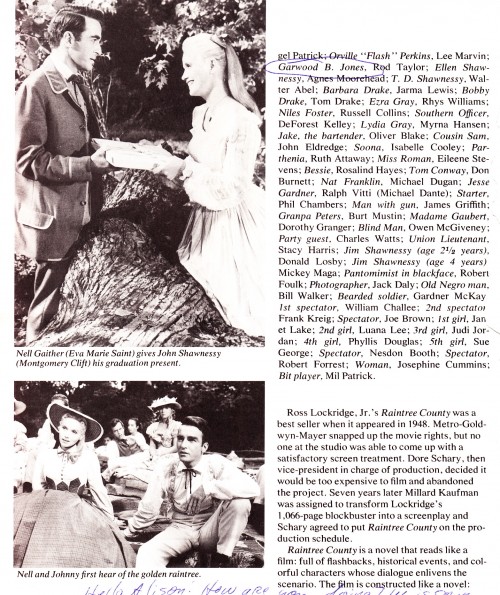 Skimming the novel, Garwood Jones (Taylor) revealed himself to be a greedy and manipulative man who took pleasure in mocking the idealism of Monty’s character, Johnny Shawnessy. That’s Johnny on the right (in the top pic). To the left is the angelic Eva Marie Saint who plays Nell Gaither, Johnny’s childhood sweetheart. Elizabeth Taylor plays the Southern hussy with the inky lashes who steals Shawnessy away right before she goes insane (for that, look down). It gets better: Nat King Cole sang the title song in the movie, a sweet number with harmonica solos reminiscent of “Moon River.” For all you film buffs, Raintree County was the most expensive film in MGM’s history (at that point). It was brought out to rival Gone With The Wind and shot using the new 65 millimeter widescreen process referred to as MGM Camera 65, the same effect used in that 1959 dust kicker, Ben Hur. 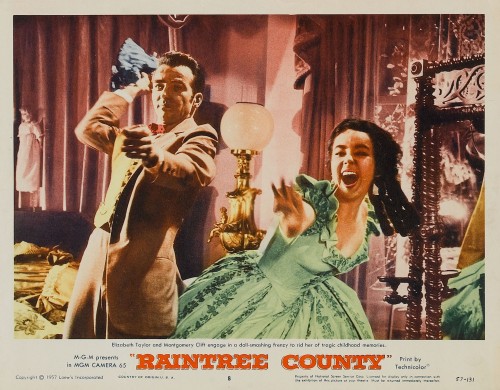 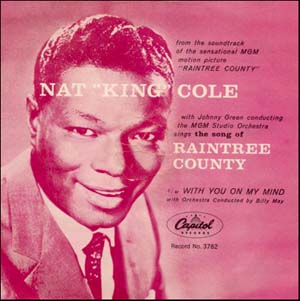 It’s interesting (to me, at least) to hear my name — one I associate with England and Wales and my fraternal grandmother’s determination to see her dead mother’s maiden name live on in history — pronounced with a Midwestern and Southern drawl. Hearing it in this context, I realize it’s tailor-made for a Southerners drawn-out pronunciation. Scarlett O’Hara would have turned my name into a syrupy dish:  Ga-a-h-h —wood Jones. And as any genealogy buff will tell you, folks south of the Mason Dixon Line are famous for bestowing a mother’s surname as the Christian name for a first-born son — Beauregard, Harley and Leland are cases in point. I think that may have been the inspiration for the name Garwood in Ross Lockridge’s 1066-page novel Raintree County.

The Garwoods (my Garwoods) hailed from the town of Bury St. Edmunds in Suffolk, England. One of my forebears (an uncle to my fraternal grandmother) ran a vegetable stall in the town’s famed street markets. Every day he delivered a portion of his vegetables to the back door of the luxurious Angel Hotel. So it’s quite possible his carrots ended up on Charles Dickens’ plate. Mr. Dickens was a regular guest at The Angel in the late 1850s and early 1860s during the English leg of his reading tours. Meanwhile, back in America, the fictional Garwood B. Jones kept busy finding ways to escape combat in the Civil War. When Robert E. Lee finally surrendered in 1865, Garwood counted to ten, then ran for a seat in Congress against Shawnessy, Monty’s character. A one-time Republican, Garwood ran on the populist party ticket to increase his chances of winning, a move that drew the ire of Shawnessy. Monty’s natural brooding fed right into his indignation.

Here’s an excerpt of a conversation between the two men from Lockridge’s novel. I include it as a reminder of how human nature repeats itself in contemporary American and Canadian politics. And, most especially, in Toronto politics. Rob Ford has played the part of “The Great Commoner” with great success, giving the people what they want and protecting the interests of the many against the few. What makes an honest capitalist, or an honest politician? Garwood B. Jones thinks he knows:

“How do you do it, Garwood?” Mr. Shawnessy said. “How do you go on playing the part of the Great Commoner?”

“Up there on the rostrum,” the Senator said, “it’s the noble part of me that speaks. You fellows appeal to my baseness. To tell you the truth, I really appreciate Raintree County when I’m a thousand miles away from it. But if I had to live here for a month, I’d go nuts. It’s so–so goddamn wholesome and peaceful. By the way, what is your candid opinion of the program today? Did it go over?”

“You’re safe, the Perfessor said. “There’s one born every minute, and each one has a vote.”

“What made you think you needed to pull this big charade, Garwood?” Mr. Shawnessy said.

“I have to take cognizance of this new Populist movement,” the Senator said. “To be perfectly frank, I’m afraid of it. After winning every political contest I’ve been entered in for thirty years, I don’t intend to get stampeded out of office by this gang of amateur politicians and professional horse-thieves who call themselves the People’s Party.”

“Of which,” Mr. Shawnessy said, “I’m a member. The People’s Party is made up of the folks who are tired of a government of cynical understandings between politicians and businessmen. As for you, Garwood, you never belonged to the People’s Party-I mean the eternal and usually unorganized People’s Party. You always belonged to just one party, the Party of Yourself, the Party of Garwood B. Jones, and you never had but one platform-the advancement of Garwood B. Jones to the Highest Office Within the Gift of the American People.”

“Not so loud, John,” the Senator said, oozing laughter. “People will overhear you.” He leaned back in his chair, mellow and unperturbed.

“Yes,” he said, “I’ve always sought the advancement of Garwood B. Jones. He’s a magnificent guy, and I like him. But I’ve always furthered this wonderful bastard’s interests in strict observance of the American Way-by giving people what they wanted.”

“By appearing to give them what they wanted,” Mr. Shawnessy said. “The people want a chance to own their own land, to have economic security, to see government perform its function of protecting the interests of the many instead of the interests of the few. You’ll promise the same things that the People’s Party are promising, to keep your party and yourself in power, and once elected, you’ll go on doing what you’ve done before because it’s the easiest way and because it’s always been successful. You’ll continue to obey the voice of the Big Interests, while wooing the vote of the Little Interests.”

“My dear fellow,” the Senator said, using his big voice like a bludgeon, “you do me a great injustice. You speak of the so-called Big Interests as if they were gangs of criminals. Who built this vast country? The Big Interests–that’s who. These men are also feathering their own nests–but they’ve discovered that the best way to feather your own nest is to advance the interest of people generally. The honest capitalist like the honest politician is the servant of the people. He’s a man of superior imagination and daring whose ability to do his country good has earned him the just reward of continued power and wealth, by which he can continue to do good.”

2 responses to “Garwood B. Jones”