How I learned to create a Gif

“If you deal in quality, not awards, what you do will always feel real.”

This is what happens when people’s determination to produce gets greedy and misplaced.

Switching gears. Understanding how to tell your stories in multiple formats is a power thing.

Hats off to Melissa Lee (@MelissaLeeDesign).

Through her @Skillshare class, “Create a Hand-Drawn .Gif in PhotoShop,” I cobbled together my very first tiny animation.

Like a Disney animator, I used the onion skin technique.

Rainy days and Mondays are for chasing inspiration.

Thank you, Skillshare for being such a great resource! 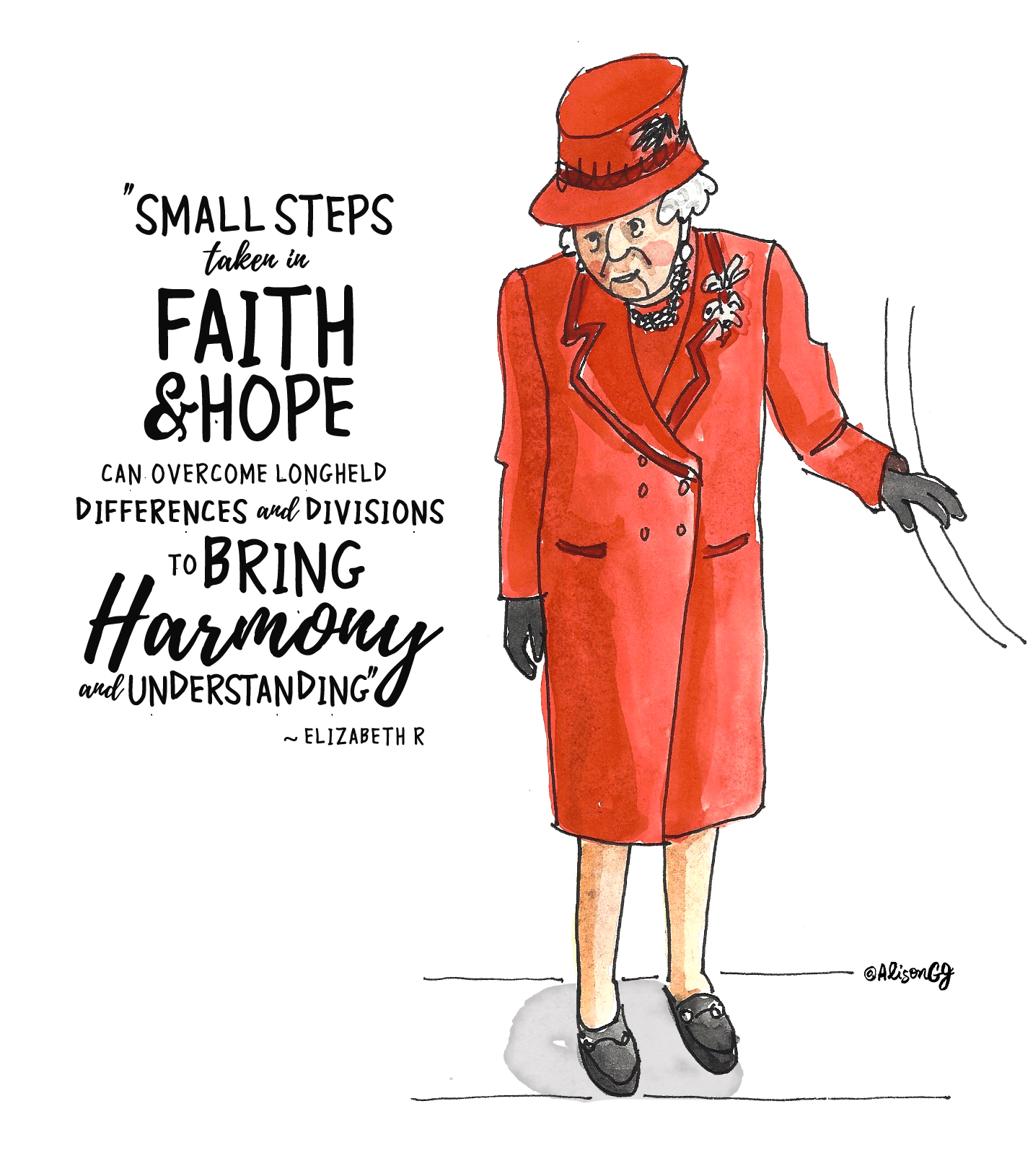 The Sound of Music and Love Actually, yes, but the Queen’s Speech is not normally part of my appointment television habits at Christmas.

This year, I watched it twice.

The pacing and coordination with the b-roll cutaways felt especially poignant.

And I’m not talking about the drone shots of ancient castles and verdant hills, or the pans across the string section of the Royal Philharmonic —the usual Royal blah blah blah.

This year, I watched it twice because HRH transcended her non-partisan function and made the personal political.

Lillibet’s heart and throat were caught up in this year’s message of global co-operation.

There was the way the camera held on the angelic face of a black boy in the choir, followed by the family portrait of Elizabeth, Philip and Doria, Meghan and Harry enthralled by the presence of Archie, the newest member of their family.

We can do it and so can you, Elizabeth was telling the world.

It is also tradition for the Queen’s Speech to combine the sweep of history with a laser-beam focus on the human values that matter most, in any age.

This year, vague platitudes were replaced with clips from the most recent NATO summit showing clear examples of past political divides broached: France (Macron) hugging Germany (Merkel) at the 75th anniversary of D-Day, and a long pause on Canada (Trudeau), so key to the Allied victory in WWII and the decades of peace keeping that followed.

As the Queen spoke, the line-up of family photos next to her wasn’t just a display of succession for the monarchists in the front row.

It was a daughter finding support in the memory of a father whose errant lock of hair she cleared from his eyes in newsreels from the early 1930s.

She must have stroked his face again when he unexpectedly ascended to the throne as the world went to war.

As binge watchers of The Crown know, George VI became king not just so his brother could marry the divorcee he loved, but so that Great Britain and the Allies could be spared the King’s fascist networking.

Edward needed to be sidelined.

As a young Queen, Elizabeth pored over every last document proving her uncle’s ugly, divisive views.

Like her father, Elizabeth is determined to play a role in bending the arc of history back towards justice and cooperation.

Her generation, she said, had D-Day.

Today we have the armies of young people working in racial justice and environmental activism, two issues a resurgent fascism is twisting.

The Queen made clear she approves of the work the young activists are doing.

More than anything, this year’s speech was delivered by a great grandmother.

It had all the markings of “the great grandmother effect”: it was an example of extended kin networking designed to strengthen the entire world.

In the Spotlight: KBarlow Design 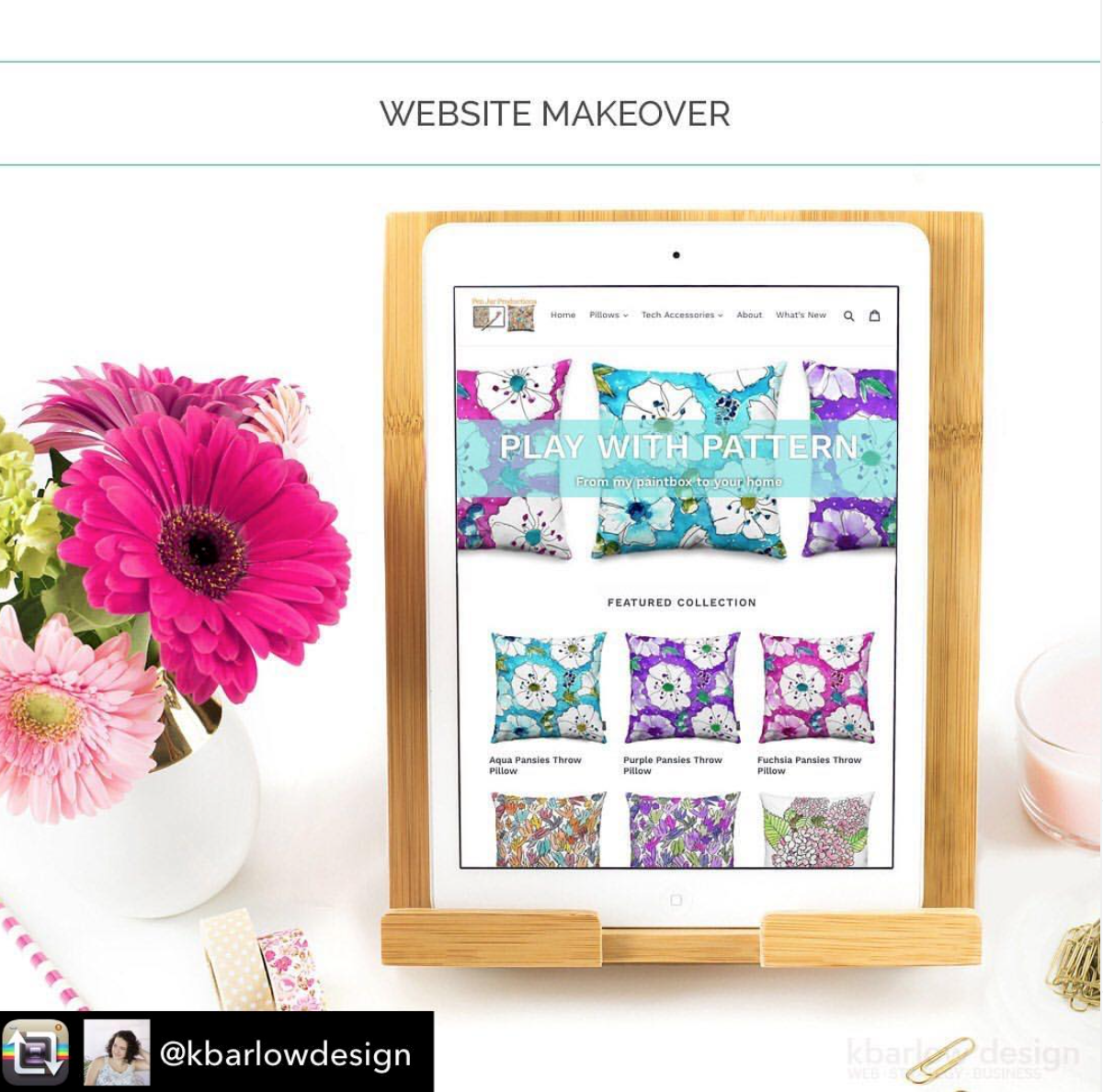 As a #bossbabe, I can’t do everything on my own.

I’m already the executive editor and artist in chief for all of my websites, but I still have a beginner’s grasp of code.

Yes, coding is on my list of things to keep learning, but in the interest of time and my sanity I choose to delegate certain tasks. Niggly coding issues is one of them.

My go-to gal for website fixes for my store, Pen Jar Productions and and my longtime eponymous website, AlisonGarwoodJones.com is Kathryn Barlow

Here’s an example of our working dynamic: Neither of us were digging the dark grey bar across my colourful pillows on my Shopify landing page. The bar was front and centre as soon as the page loaded.

Kathryn asked if I chose that or if someone else had set the site up like that? I explained that it came with the template. And I no idea how to change it.

Kathryn did a quick mockup to show me some better options, and I picked the beautiful aqua tone featured up top.

As Kathryn says, “Website makeovers don’t have to be huge, overwhelming ordeals. They can be tiny tweaks that update your website to better reflect where your business is at now.”

Check out Kathryn’s Instagram profile and website and consider teaming up with her in 2020 to keep your websites in top working order. ~ Alison

The truth about the world 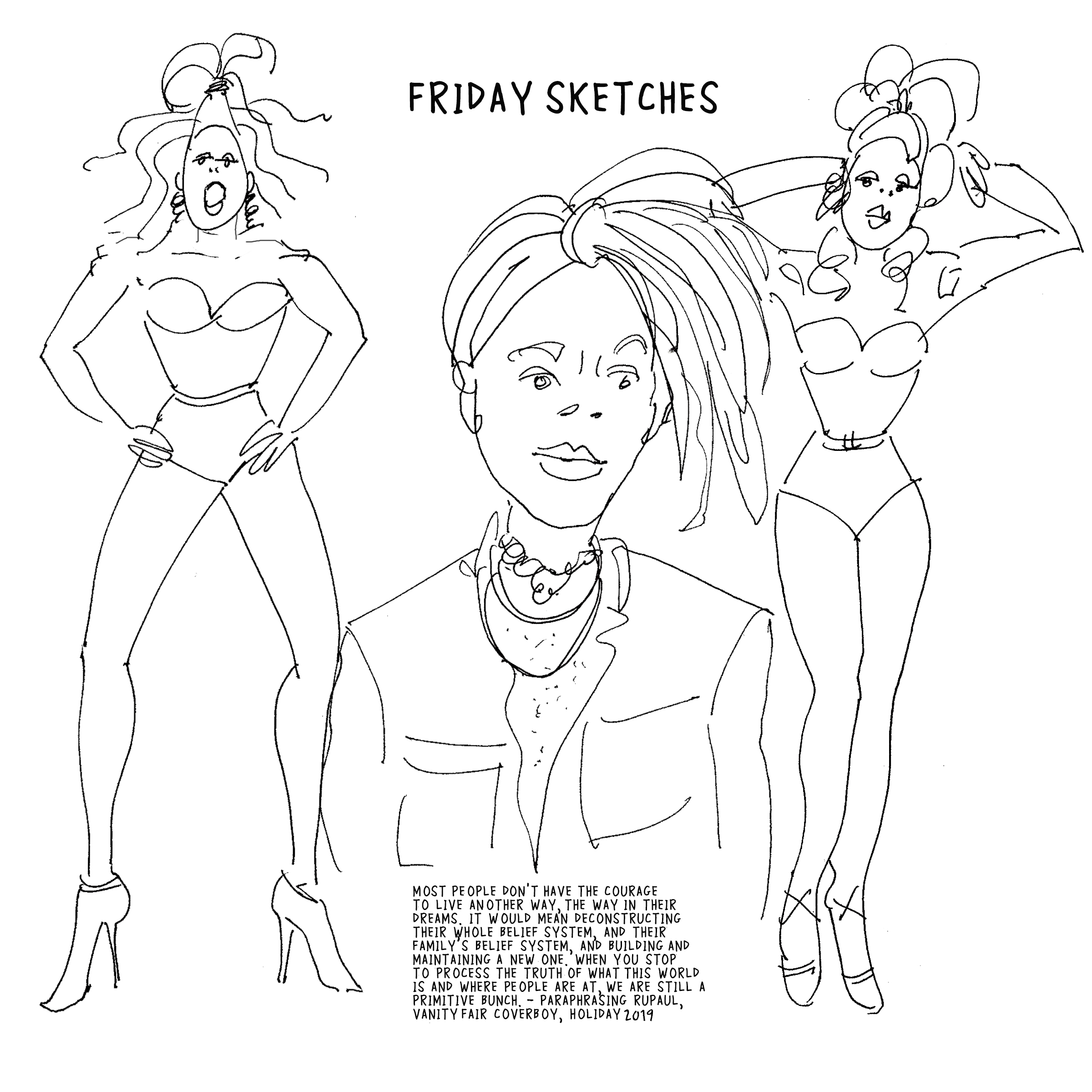 Pen Jar Productions is featured in the Toronto Star 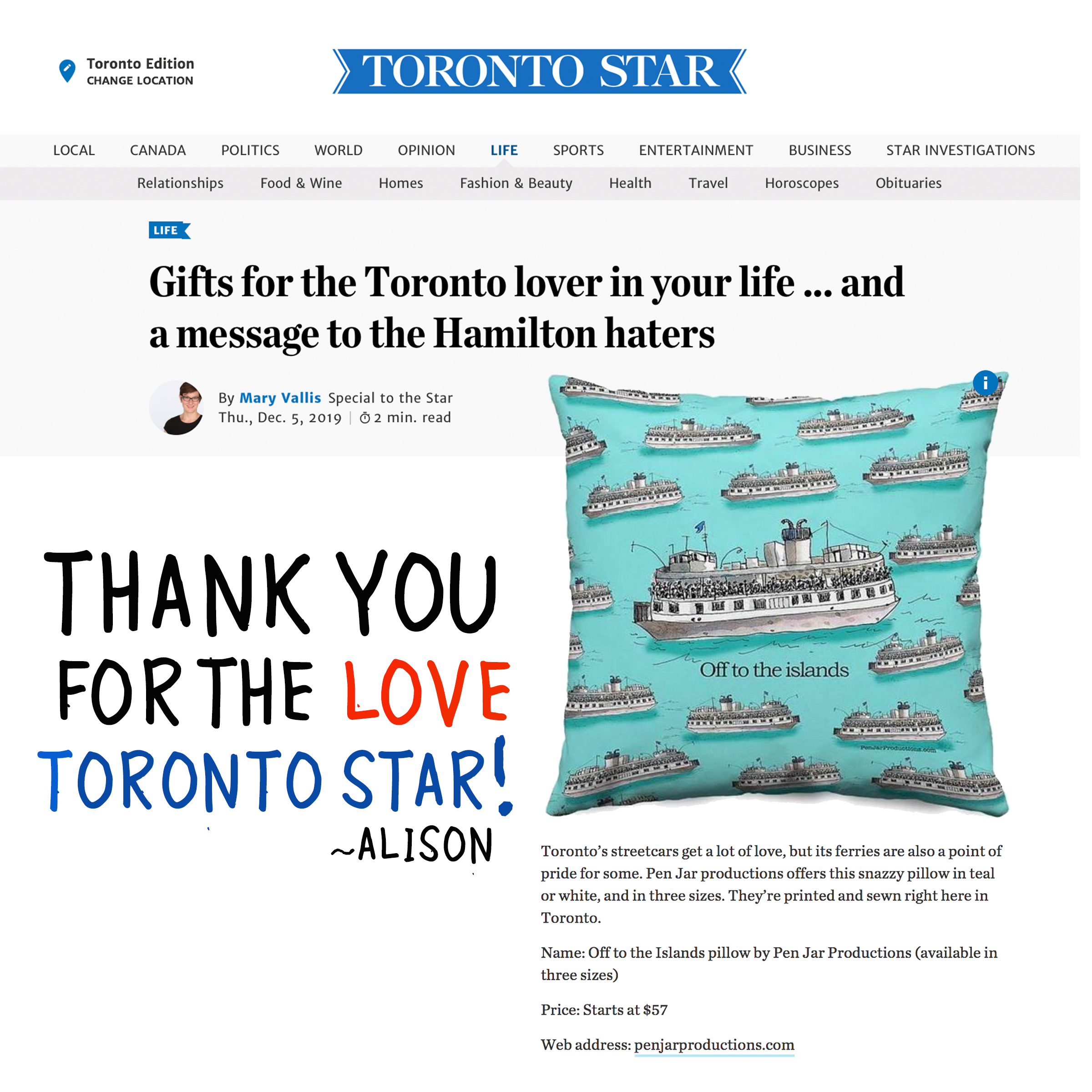 A little dance around my drawing desk!

A year and a half into my illustration biz and I have my first serious piece of earned media, as the PR folks like to call “press.”

Thank you, writer and artist, Mary Vallis (@maryvallis @canadianstitchery). This means a lot.

I will be tabling tonight and tomorrow at the Algonquin Island Association Christmas Boutique 2019. And, yes, I will have to take the ferry to get there! Please come and visit me!

Proudly printed in Terano/Trawno/Tronno/Taronna/Torontoe by Notion

Home decor items featuring my art can be found at PenJarProductions.com 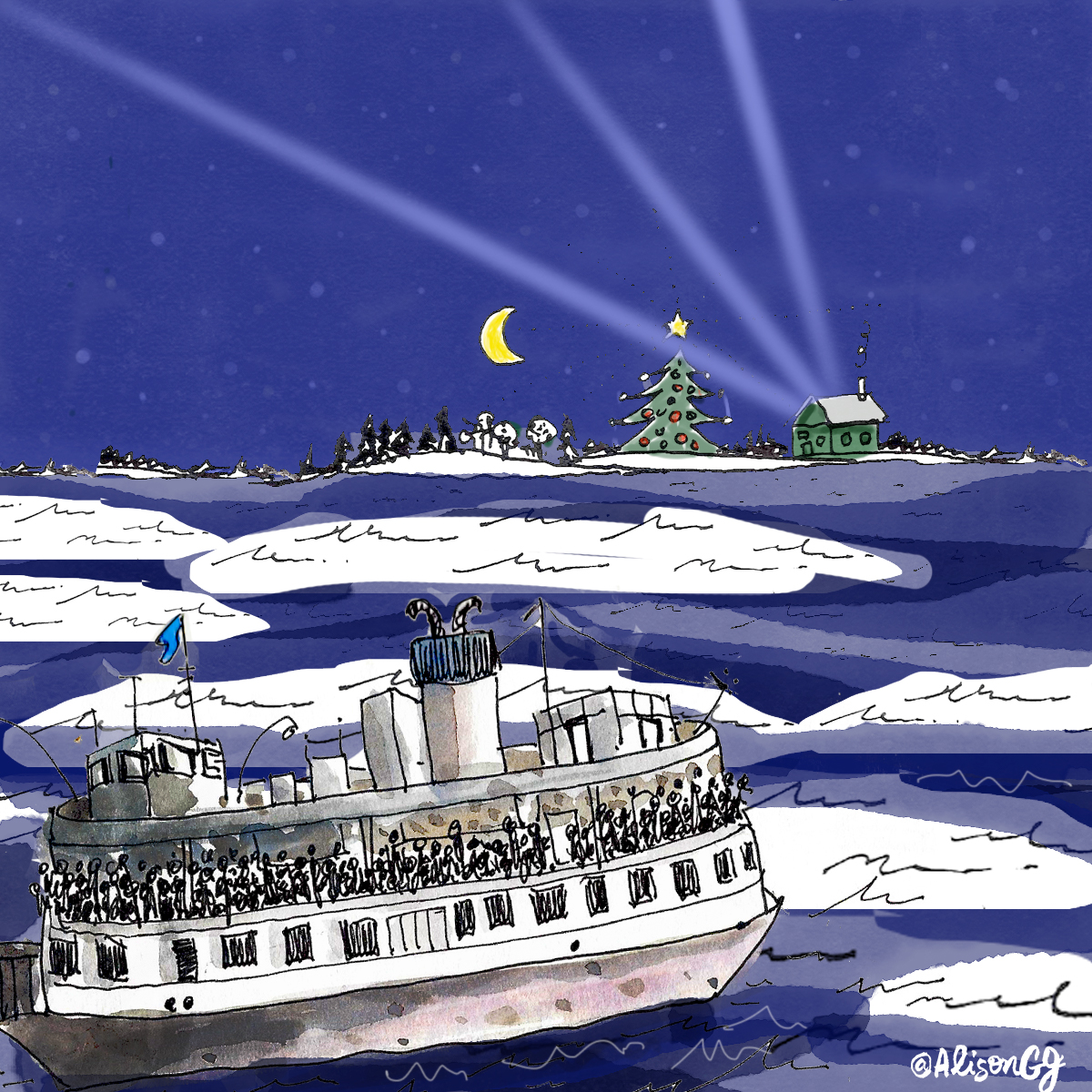 I love it when I get up early to make art.

I especially like imagining the features of my city through line and colour.

Reading about Toronto in a novel or seeing its what makes it unique through an illustration is a really good way to step outside of our ourselves and our routines and get a fresh sense of who we are and what we have to offer the world.

I will be joining a group of wonderfully talented artists and crafters participating in this year’s Algonquin Island Association Christmas Boutique 2019.

There will be spiked eggnog. Come by my table and let’s catch up! 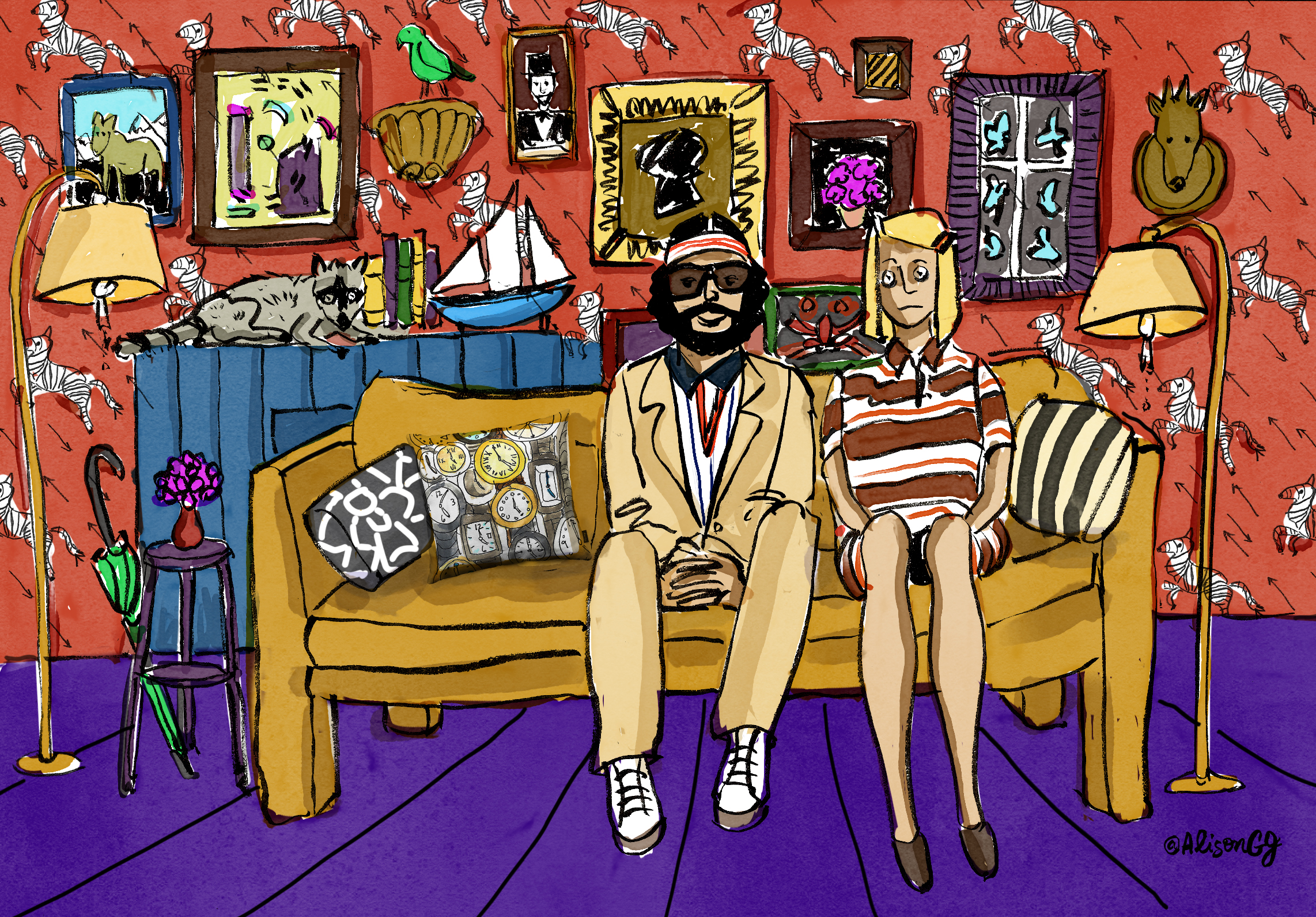 I met my friend Sam for lunch last week. We caught up on work and life.

Then he told me that walking into his living room and seeing the Watches Pillow I made for him was like receiving a little jolt of Wes Anderson. I’ll take that!

The things you learn about your designs from the people living with them!

Sam, this drawing is for you!

30 Gift Ideas For The Month of November

HOLIDAY GIFT GUIDE: Every day for the month of November, my store Pen Jar Productions will be posting a different Holiday Gift Idea.

I like coming up with designs that make people smile or sit up. It makes me feel like I’ve just looked you in the eye and found a way to turn down the volume on your stress.

Here’s how it works: I feed you the unique gift ideas > you take all the credit!

Over the past year and a half, I built a small online store and filled the shelves with one-of-a-kind Throw Pillows, Tote Bags (many with a Toronto theme), Custom Chiffon Scarves, Tees, phone and laptop art, and my first enamel pin of Jane Jacobs.

I only focus on Badass Women who have moved mountains.

Here are a few pages from my 2019 Holiday Gift Guide. If you see something you like, click the image and it will take you to my store at PenJarProductions. 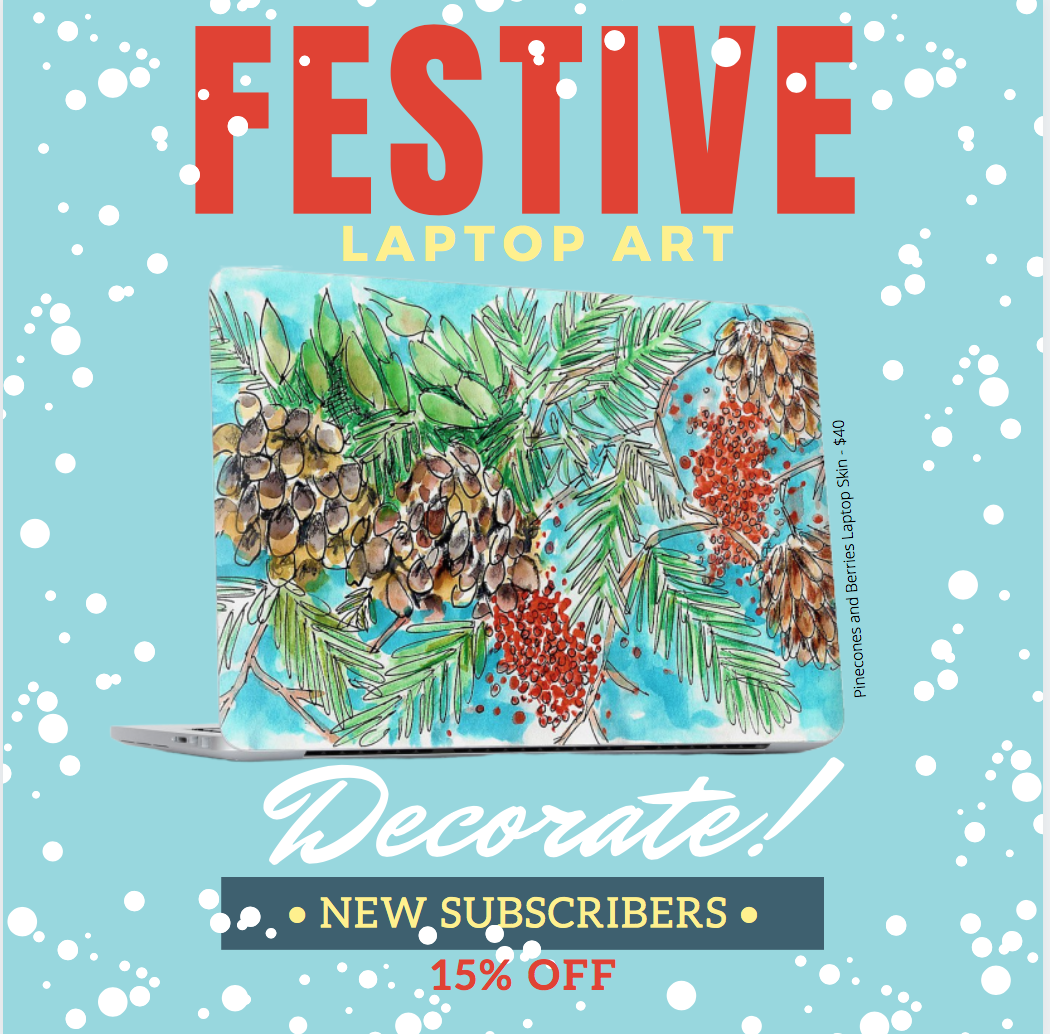 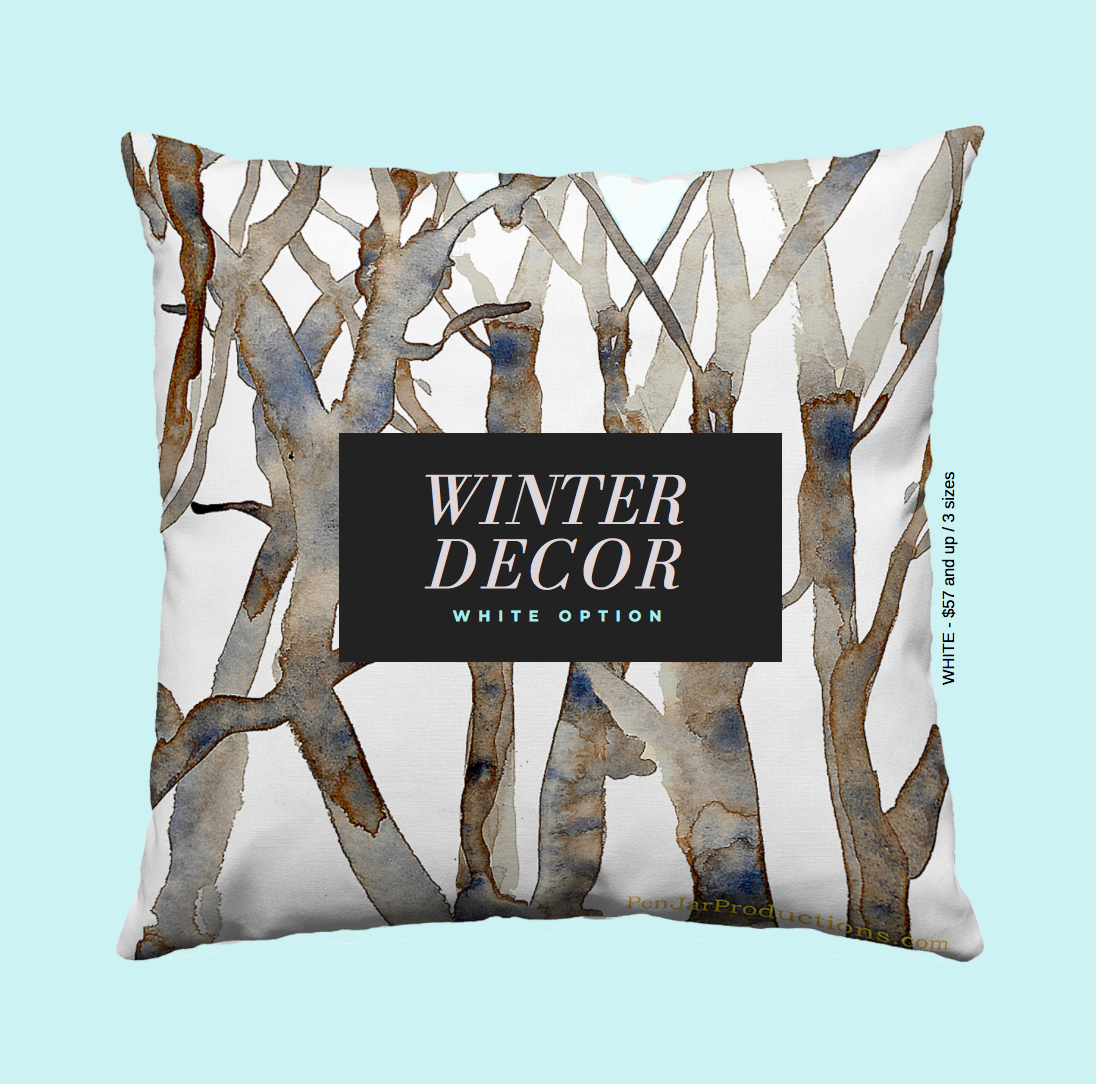 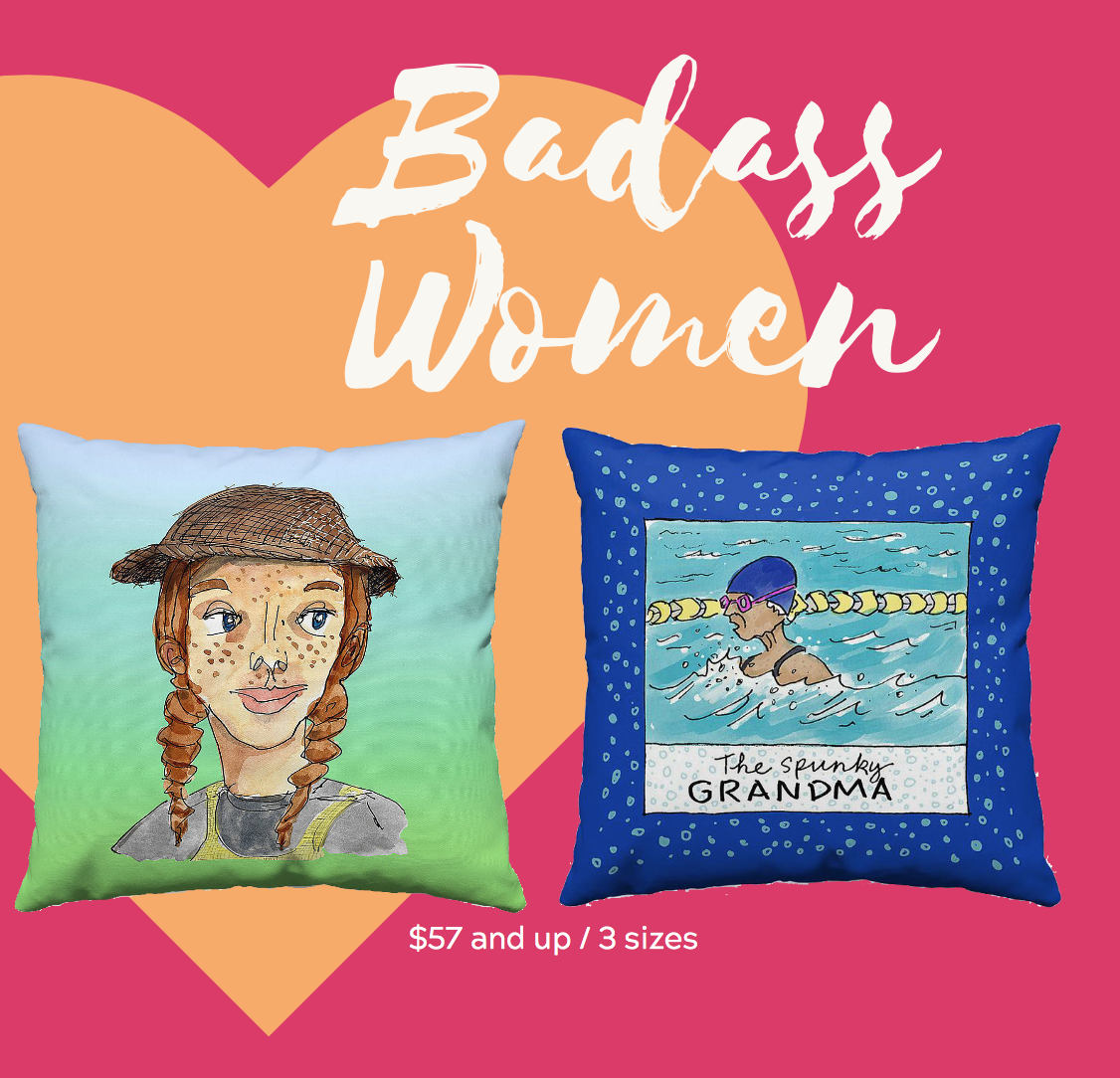 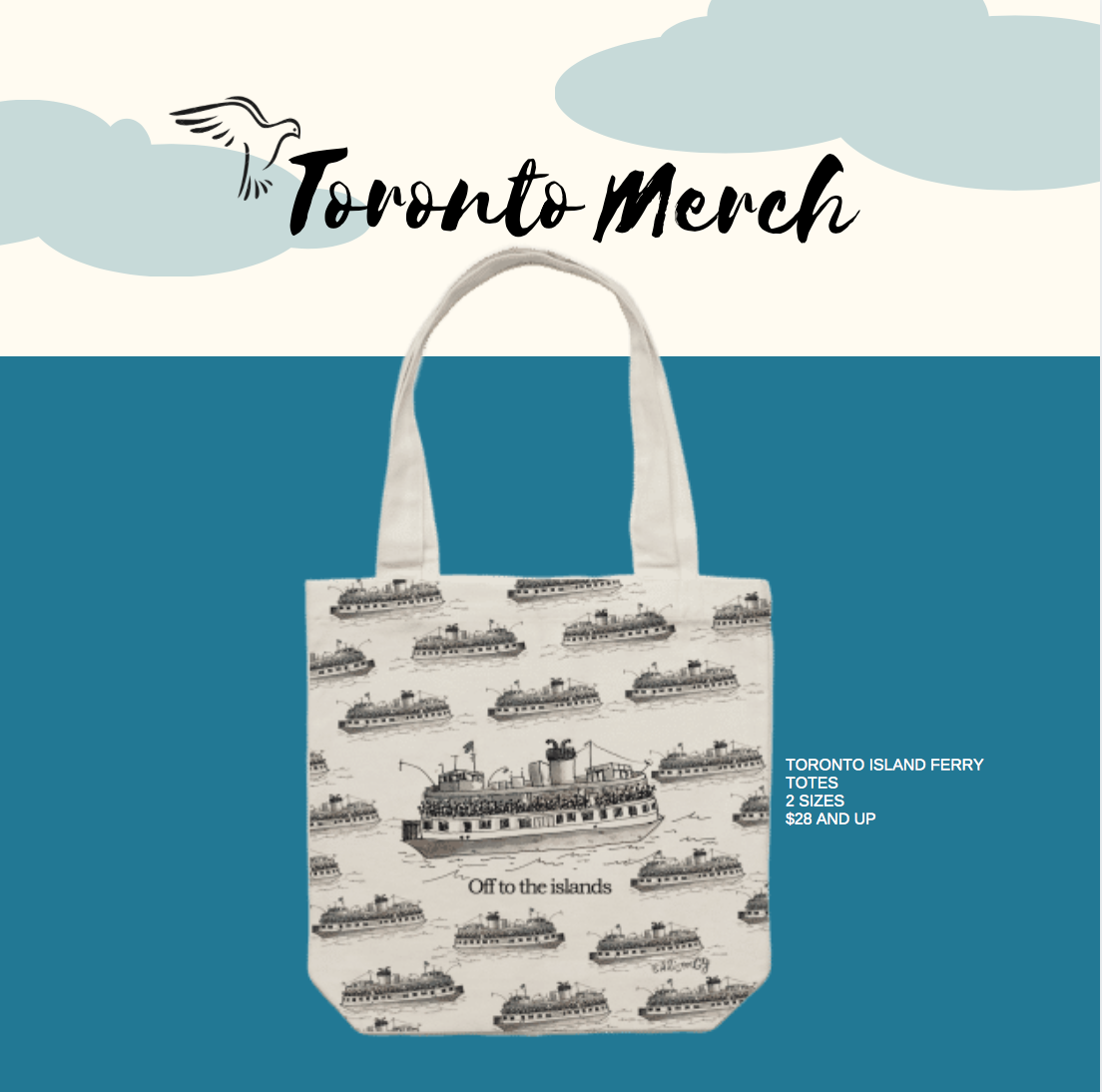 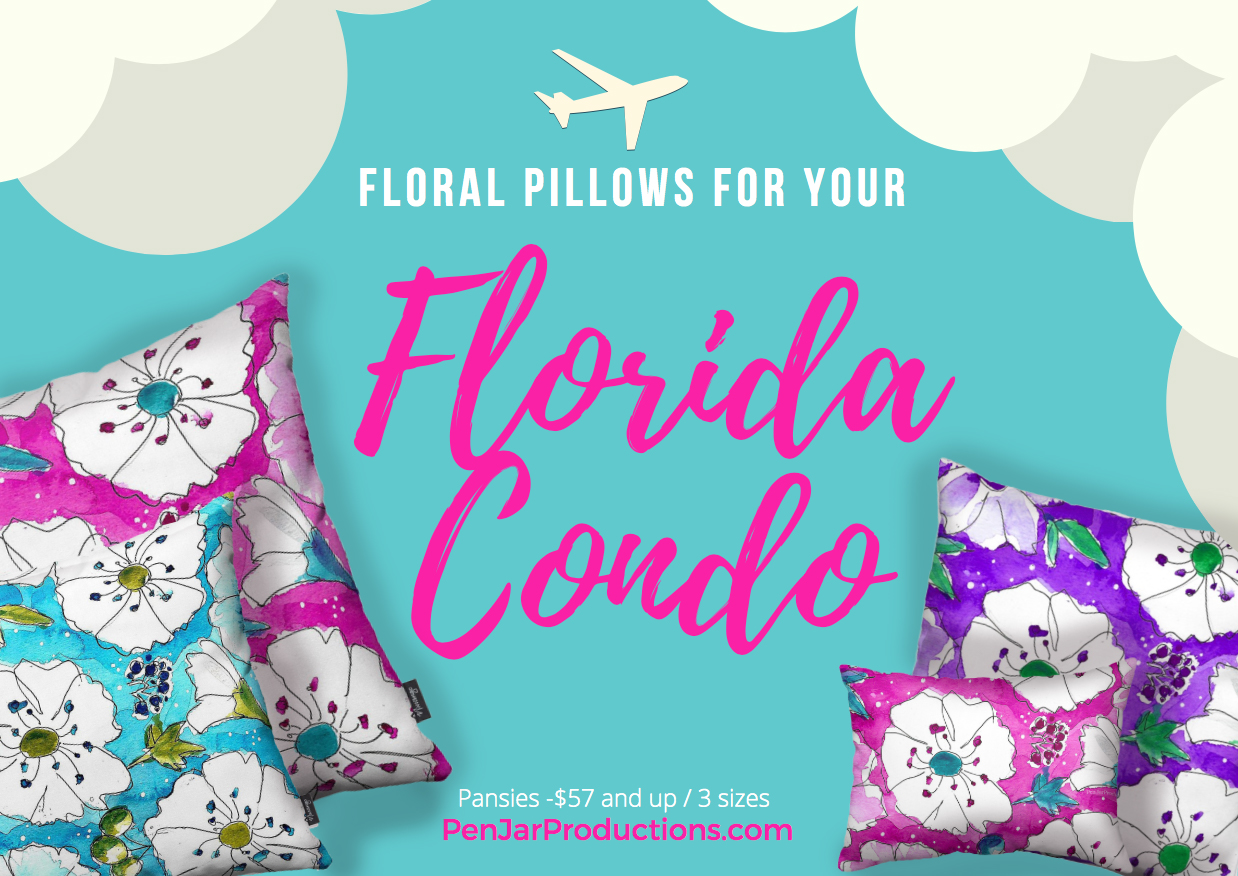 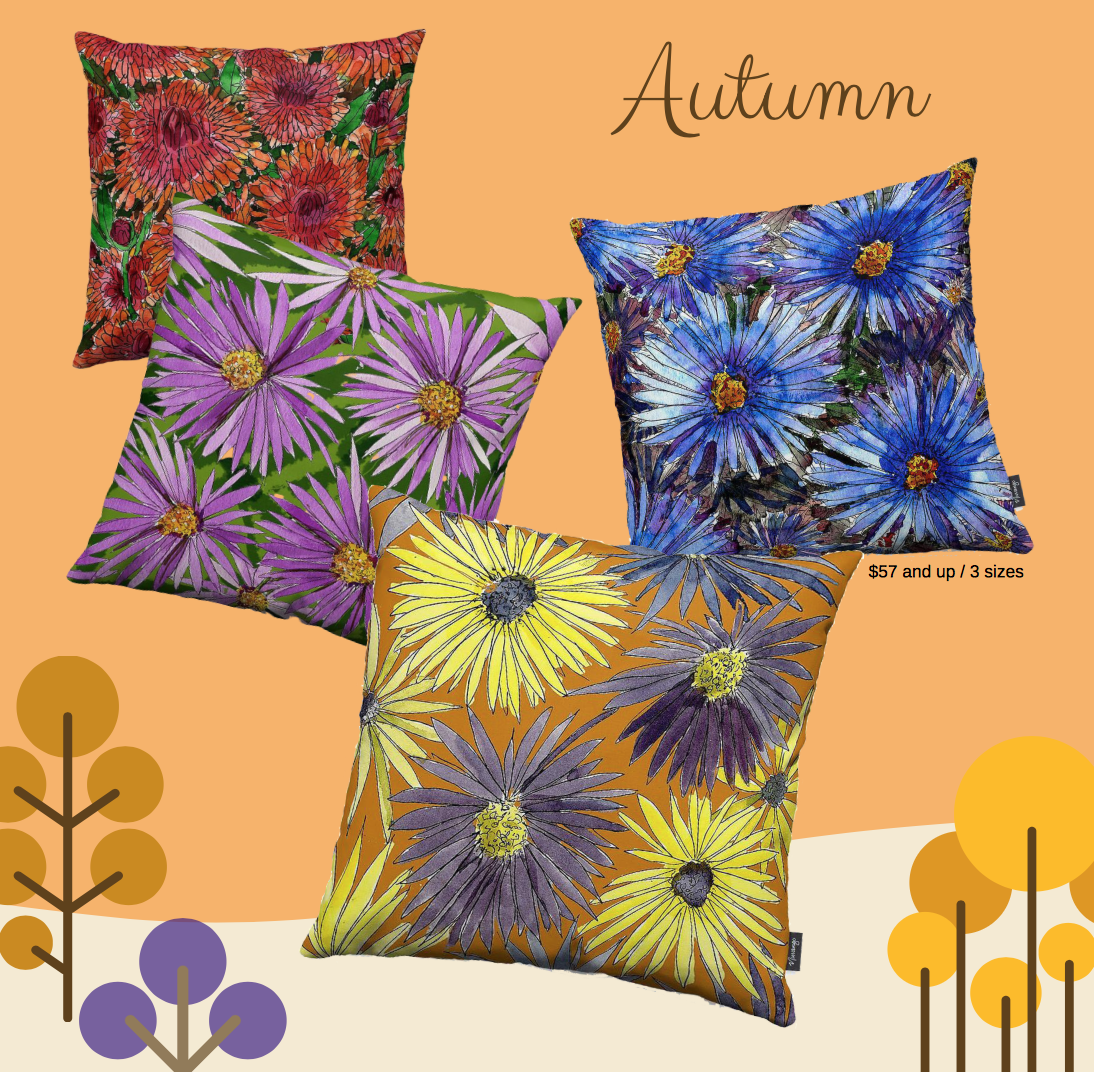 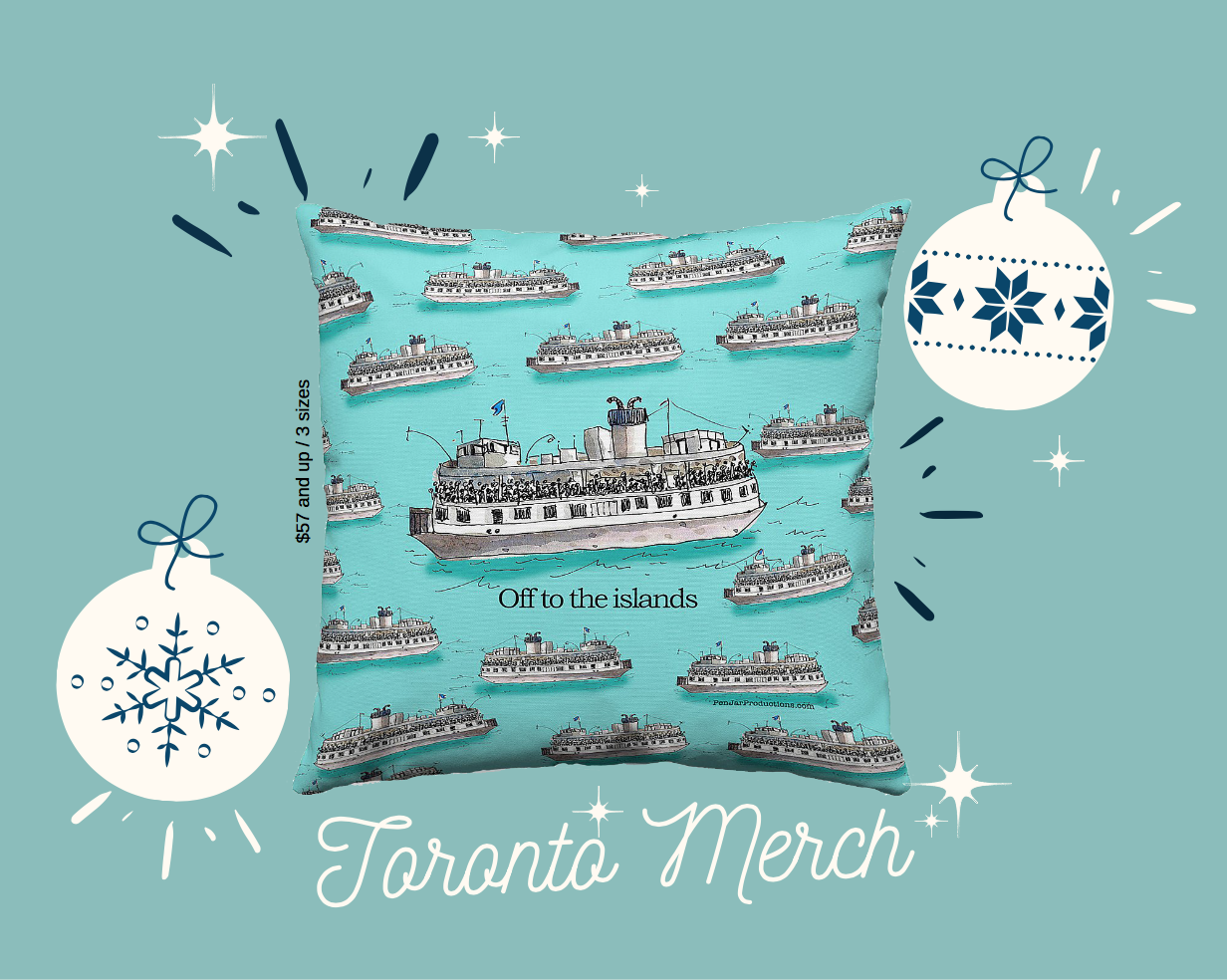 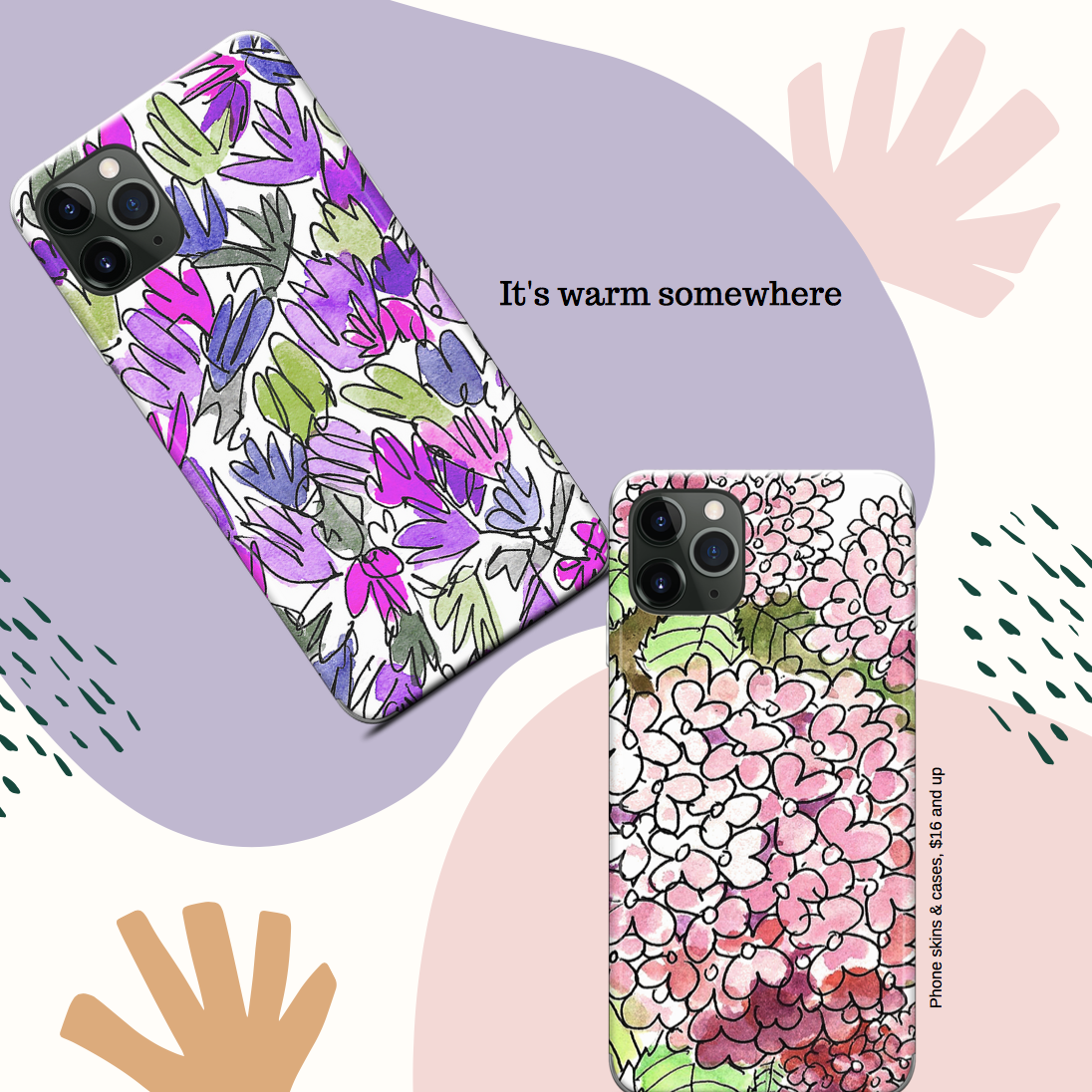 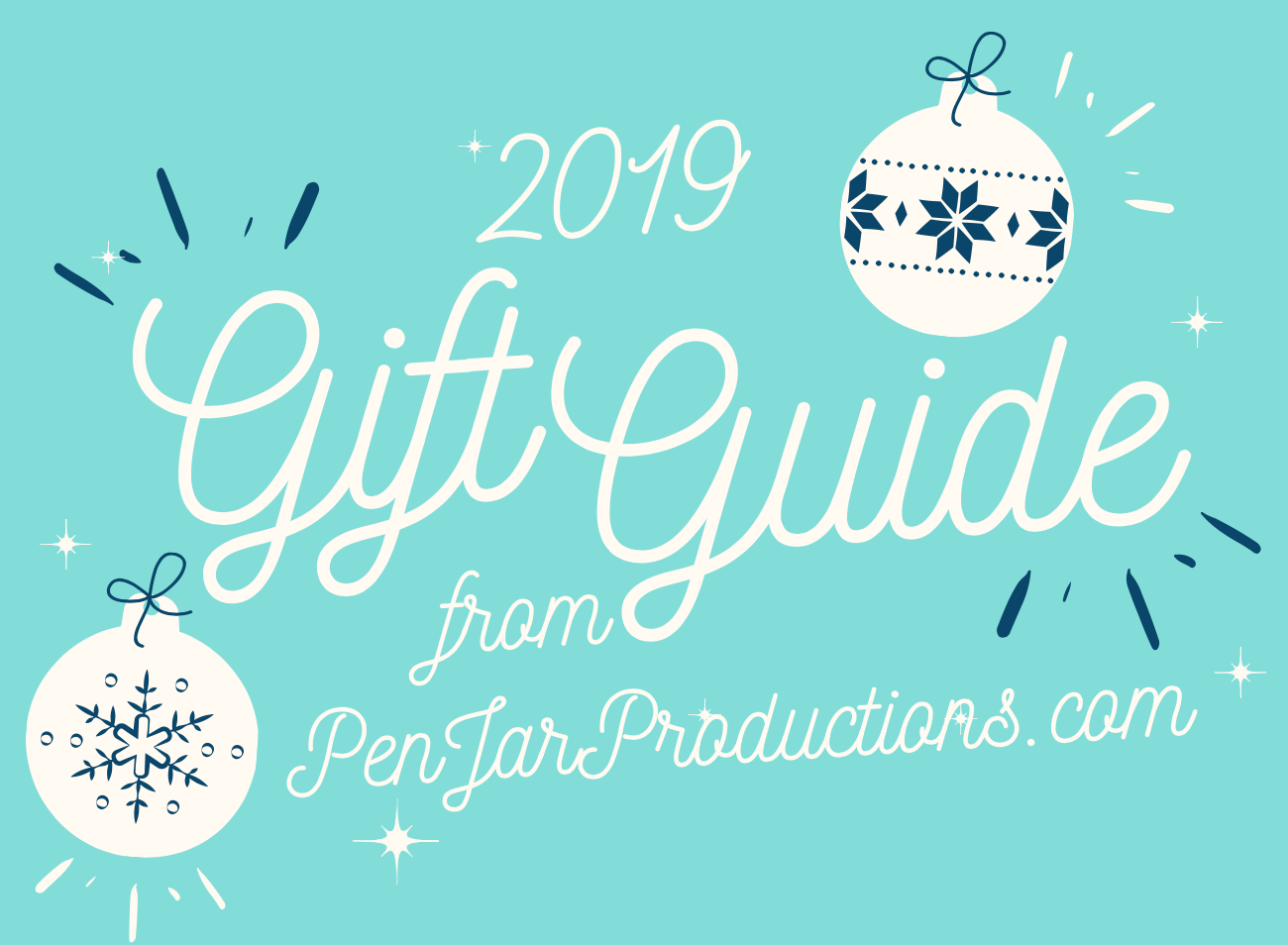 Preparations are already underway! Plus, I’ve hired Buddy and Hermey to help me out in the Pen Jar Productions workshop (my Shopify Store).They’re good at making unique gifts!